Georgia is one of 12 states that have not adopted Medicaid expansion under the Affordable Care Act. There are new incentives under the American Recovery Act for states to expand coverage and there is increasing evidence that Medicaid expansion is linked to improvements including in access, financial security, and some health status. 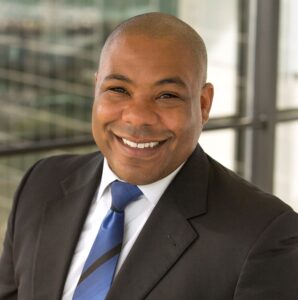 Both signal a critical lack of appreciation for the cost of healthcare that people, particularly the underserved, experience. Patientco, a patient payment technology company headquartered in Atlanta, surveyed over 3,000 patients of large health systems and found that nearly one-third of patients say they’ve avoided care because they were worried about what they would owe. Coupled with an eminent ruling by the United States Supreme Court, that could strike down the Affordable Care Act and leave millions of Americans uninsured, the most impacted communities in Atlanta will continue to disproportionately be those of color. Happy Juneteenth.

The Affordable Care Act (ACA) created health coverage options that provided an opportunity to close the historical gaps of racial and ethnic disparities in access to quality, affordable healthcare. If reversed it will have devastating impacts on Black, indigenous and people of color (BIPOC), rural and the poor communities in metro Atlanta and across the state.

Harvard University, the Centers for Disease Control and Prevention (CDC), the American Medical Association (AMA) and numerous other credible institutions have recognized racism as a serious public health threat. Yet, in Atlanta, healthcare, and governmental organizations other than the CDC seem reluctant to take a stance and begin to invest in the hard work of dismantling and reconstructing a healthcare system that would better serve all Georgians. One might assume that the CDC is not located in Atlanta and has little to no impact on our surrounding health systems. Dr. Kathleen Toomey, commissioner of Georgia Department of Health, recently acknowledged the ongoing vaccine rollout faces a major obstacle: reluctance among white communities in rural parts of the state. 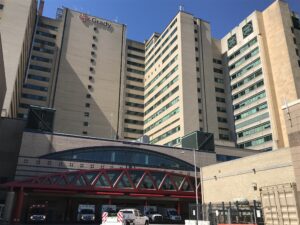 Grady Memorial Hospital ranks near the top among hospitals nationwide, No. 43 out of 3,359, in a category named ‘Civic Leadership/Inclusivity/Race,’ which ‘reflects commitment to equity, inclusion, and community health,’ according to the latest report by Lown Institute Hospitals Index. Credit: David Pendered (2019)

Hospital systems across the country are recognizing their roles as anchor institutions. They are typically large employers and have a vested interest in making sure social determinants of health are addressed. In 2019, I facilitated a meeting designed to foster hospital community collaboratives and to address how Atlanta should be working toward a collective investment in affordable housing and homelessness, contributors to poor health outcomes.

The invitees to that meeting were representatives of major healthcare systems, the mayor’s office, Federal Reserve Bank of Atlanta, and others. The sole purpose was to talk about these things and how the health systems could address them. Yet since then, I and others in attendance have yet to hear any follow up plans of action. There may not be as much going on in and around Atlanta as need be and that reinforces systemic oppression and health inequity. Especially, as I have not seen or heard one healthcare system in Atlanta acknowledge racism as a health crisis or institutional racism as real.

For too long, our healthcare systems here in Atlanta have treated racism like someone else’s problem, as if these very systems have not perpetuated systemic and institutional racism. Having been a leader in one of these systems, I can tell you first-hand that paying attention to structural inequities has not been front and center on the agenda of healthcare executive leaders in Atlanta, perhaps with the exception of Grady Health System.

African Americans make up half of the city’s residents, but 80% of Black children here live in high-poverty neighborhoods with little healthcare access, compared to 6% percent of white children. African American women are 50% more likely to die of breast cancer than white women in Atlanta, making it the broadest breast cancer mortality rate in any U.S. city. We are also home to the nation’s highest death rate for Black men with prostate cancer. Here, 49.7 Black patients per 100,000 residents die of the disease or related complications, compared to 19.3% white men. Considering the representation of minorities, being home to the foremost public health agency in the world and health systems that tout being national leaders for safety and quality, Black and brown communities in Atlanta are being failed. 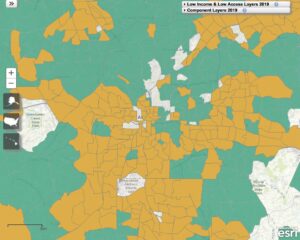 Other areas such as financial instability, food insecurity, and environmental determinants need to be addressed in concert with housing and homelessness. Atlanta has been recognized as the capital of income inequality and the place with food deserts that resemble old western towns with the tumbleweed passing. Collectively, this manifests in people not being able to pay for basic housing, healthy food, medications, utilities, and other necessities impacting quality of life and health outcomes. Despite massive tax breaks and requirements for community benefit, Atlanta hospitals continue to underperform in comprehensively addressing health equity. In 2021, the Lown Institute, an independent think tank, released a ranking system for U.S. hospitals’ on the degree to which they are adequately caring for the lower income and patients of color. Sadly, only two Atlanta metro area hospitals ranked in the top 100 for racial inclusivity, Grady Memorial Hospital and Wellstar Atlanta Medical Center and Emory University Hospital Midtown. This is likely a function of their location in downtown Atlanta rather than an actual strategy to address racial inclusivity and health equity.

Thankfully, a host of players such as Healthcare Georgia Foundation, Partnership for Southern Equity and other community focused groups have developed programs from the now fragmented baton. While the Satcher Health Leadership Institute at Morehouse School of Medicine is leading some phenomenal health equity work – it’s a school and not a major health system.

There are practical steps Atlanta’s healthcare leaders can take to reverse course. They can start by taking a serious look at prioritizing health equity and diversity in their organizations.

Healthcare leaders should be asking themselves:

It is not enough to make one employee accountable for this work. If leaders want to combat this pervasive health threat, they must fully commit to addressing it across and beyond the four walls of their health system through resources, actions and involvement from the very people who stand to lose the most.

Our healthcare executives, politicians, and community leaders must find the courage to rise above their quests for self-preservation and do the messy, often difficult work of uprooting and dismantling systemic racism.

If we want to resolve systemic racism as public health crisis, we must call it what it is and admit that the very organizations meant to protect our health have not done the job they were called to do for underserved, marginalized and minority populations.

Raising Our Voices: Championing the importance of global health on Capitol Hill