By Guest Columnist Dr. PREETI JAGGI, a pediatrician based in Atlanta

As a pediatrician, I’ve seen firsthand how the burden of pollution and climate change can disproportionately fall on our children. 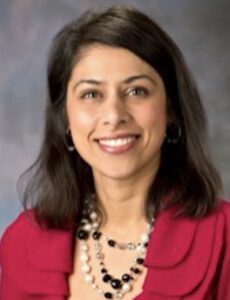 Their developing lungs are susceptible to carbon pollution from idling school buses and wildfire smoke. For young children of color, these health ailments are more severe and common as their communities are often hit first and worse by climate change and face increased health burdens from pollution, compared to the overall population.

Drastic changes in our temperature and climate are known to increase the risk of infectious diseases such as malaria and water-borne illnesses following extreme weather events like flooding. Malaria is one of the most pervasive and dangerous diseases threatening children under the age of 5 years. Nearly 90 percent of the burden of these diseases is borne by children in this cohort.

Today, nearly 160 million children globally are living in areas that regularly suffer from extreme drought. Persistent drought threatens food access and can have an outsized effect on children’s nutrition and development. In Georgia, these conditions are threatening agriculture staples such as peanuts, pecans, and peaches. Crop losses, including the $339 million sustained in 2007, place many low-income households in financial stress.

Even though our youth contribute little to the carbon pollution accelerating climate change and extreme weather events, they will still have to deal with the worst consequences of these human-caused climate disasters. As adults, it’s on us to do everything we can to leave a livable world behind for them by investing in their clean energy future today.

We are on the precipice of a historic moment in which we can take the necessary steps to halt climate change in its tracks, transition rapidly to clean energy, and make our country healthier and more prosperous for all communities. Now, environmental, religious, and public health advocates like myself, Georgia Interfaith Power & Light, Georgia Conservation Voters, and the Partnership for Southern Equity are calling on Georgia’s senators, Jon Ossoff and the Rev. Raphael Warnock, as well as Georgia’s members of Congress, to get us over the finish line.

The House of Representatives just passed the Build Back Better Act reconciliation bill – a federal budget proposal that will infuse our economy with needed investments to address the climate crisis, environmental justice, and the expansion of clean energy jobs and technologies. This historic investment in clean energy, climate, justice, and jobs is a major step that will put us firmly on the path to 50- to 52-percent reductions in carbon pollution scientists say is needed and President Biden promised.

Following the COP26 summit, the bill’s $500 billion in climate investments also ensures that the U.S. will meet its promise to lead on climate on the global stage. When he took office, the president promised to build back better. This means fixing our broken infrastructure, transitioning to 100 percent clean energy by 2050, cutting the carbon pollution that causes climate change per recommendations from the world’s top scientists, investing in an economy that works for all Americans, and supporting the residents of communities who’ve borne the brunt of environmental injustice.

This summer’s unending stream of extreme weather events has made clear just how necessary a bold budget is at this moment. Record-setting extreme heat, wildfires, drought, megastorms, and destructive flooding have touched nearly every corner of the United States. ​​From 2010 to 2020, Georgia experienced 46 extreme weather events, costing the state up to $20 billion in damages. One-in-three Americans lived through an extreme weather event this summer. These events pose huge threats to public health, our economy, education, and environmental justice. If we don’t act now to address the root causes of climate change, these events will only become more frequent and severe.

The Senate must now move swiftly to push the BBBA and its climate provisions across the finish line. We need Ossoff and Warnock, and the rest of Georgia’s leaders in Congress, to continue leading on clean energy growth and support a budget that makes investments to cut pollution, create jobs, address environmental injustice, and tackle the climate crisis. Time is running out, and Georgia’s children need our elected officials to support the Build Back Better Act and act now on climate.

Note to readers: The $2 trillion Build Back Better Act has passed the House and is pending in the Senate. Senate Majority Leader Chuck Schumer (D., N.Y.) has said he hopes the chamber will approve the legislation by Christmas. Any changes the Senate makes need to be approved by the House before the legislation can be sent to the president’s desk.

Dr. Preeti Jaggi is a pediatrician based in Atlanta.