Time to repair our immigration policy and the American dream

I write today as a conservative and registered Republican, a descendant of German immigrants to America, and a 30-year veteran of the construction industry.  I started on the jobsite and worked my way to a senior management role with one of the country’s oldest and largest general contractors.  These threads all tie together.

When the economy collapsed in 2007 and 2008, the construction industry was hit much harder than most.  For the past several years, our unemployment rate has been double the national average, hovering at times near 25 percent.  The January 2013 employment data showed an increase in construction jobs across the United States, but even now the industry remains two million jobs below its April 2006 peak.

Now that the economy is finally rebounding, my company and others are working hard to position ourselves to respond to a pent-up demand for newer and more modern facilities to replace an aging stock of office buildings, schools, hospitals and other facilities.  We’ve been through this type of cycle before and responded well, but today we face two related challenges that seem new and different.

One is that as construction jobs evaporated during “the Great Recession” of the past few years, the qualified tradesmen and women who filled them have moved on and haven’t been replaced.

I’ve seen this trend develop and accelerate over the course of my career, and to some degree we are victims of our own American progress and success.  With the rise of the American middle class following World War II, generation after generation sent ever-growing numbers to college.  One consequence has been a skilled set of white collar workers, but another is an enormous void of qualified carpenters, electricians, cement masons, heavy equipment operators and others.   The sad truth is these are jobs that fewer and fewer Americans want. 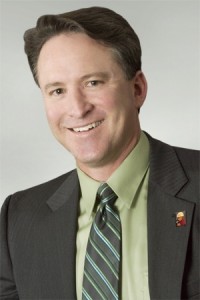 At the same time, we are depriving ourselves of a readily available and very willing source of skilled labor to fill those very jobs.  America used to pride itself on being the melting pot of humanity, and ours is a nation that has literally been built by successive waves of immigrants from all over the world.  From the dawn of our nation, immigrants have provided the muscle that has built our railroads and highways, skyscrapers and schools, hospitals and homes.

I relate to all of this on a very personal level.  My own father’s grandparents were German immigrants.  My father was trained as a carpenter and worked hard every day, finally becoming part-owner of a construction company.  He taught me carpentry and put me to work on a small hospital in Elgin, North Dakota, when I was 15 years old.  I saved my money, went to college and am today privileged to manage the Southeastern Division of one the country’s oldest and largest general contractors.

I feel genuine humility at having lived a piece of the American dream.  I also feel a duty to help perpetuate that dream, and recognize the importance of helping clear a path for the waves of new immigrants who seek it and will be vital to sustaining it.

But today we find ourselves bedeviled by the knot that is our nation’s – and our state’s – immigration policy.

As an active Republican, I fully appreciate just how frustrated and infuriated many in my party are over the magnitude and consequences of illegal immigration.  Generations of political leaders, Democrat and Republican alike, have failed to deal with this issue.  But as a businessman and pragmatist, I believe we have to confront problems as we find them – not as we would like them to be.

To understand the consequences of simply attempting to remove those workers from the economy, we need look no further than what happened to Georgia agribusiness in 2011, after the General Assembly passed an anti-immigration bill (House Bill 87) targeting illegal immigrants and those who harbor them.

More than 5,000 seasonal harvester jobs went vacant pretty much overnight – despite various state efforts to fill the positions and even with a statewide unemployment rate of 10 percent.  A study by the University of Georgia put crop losses at $70 million and the overall hit to Georgia’s economy at $390 million.

HB 87 may have sated political passions in the moment.  But it came at an economic cost we could ill afford, then or now.  It also ignored history and traditions that have helped build our nation and, frankly, saddled the party of growth and opportunity with a political burden that will weigh it down for years to come.

Those of us who will inevitably be at the forefront of efforts to rebuild our economy – and the construction industry in particular – have not just an interest, but a high duty to engage on this debate and press for rational immigration policies that will give new life to the American dream and reinvigorate our economy.

In Washington, leaders in both parties finally seem poised to forge an immigration policy that will provide illegal immigrants with ways of participating openly in the American dream and make them be accountable for their share of the tab.  It won’t be a perfect solution, but it will be a start.

We need to implore our leaders here in Georgia to make the same beginning.  From my perspective, the societal, economic and political problems we face in this matter have a common solution.  The time has come to cut the knot.