The Georgia Wildlife Federation has a new president and CEO.

The Federation’s board has selected Todd Holbrook, former deputy commissioner of Georgia’s Department of Natural Resources, to head the organization beginning on Jan. 1, 2013.

Holbrook, who lives in Conyers, is joining the Federation after spending 27 years with the Georgia DNR in several roles — assistant director of the Wildlife Resources Division and chief of Game Management.

Holbrook is a biologist by training with degrees in wildlife management from the University of Georgia and Virginia Tech. He has been responsible for “several groundbreaking studies into the decline, recruitment and retention of hunting and angling participation,” according to a release about the appointment.

“I am proud to be joining a sportsmen’s organization with three-quarters of a century of conservation history,” Holbrook said in a statement. “GWF will continue to be active in the defense of the public’s rights to enjoy the public’s fish and wildlife and to maintain these resources in abundance.” 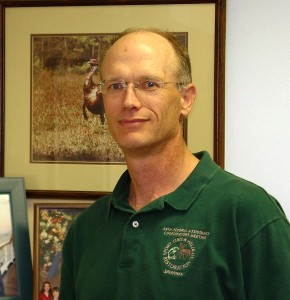 Holbrook will be succeeding Jerry McCollum, who announced in July his intention to retire as president and CEO by the end of the year. McCollum has been with the Federation for 25 years.

McCollum and Holbrook will be working with the Federation’s on a transition plan through the end of the year.

“I am delighted with the choice our board made for my replacement,” McCollum said in a statement. “Todd and I have worked together for a long time and I look forward to continuing to work with him in my retirement.”

Among Holbrook’s accomplishments include championing the development of a comprehensive statewide deer management plan. Under Holbrook’s leadership, a scientifically-driven statewide management plan was enacted which maintained the quality of Georgia’s world-class deer population and the quality of hunting opportunities while keeping the population in balance with the habitat.

Holbrook was also a leader in the development of the youth education programs within the Wildlife Resources Division of DNR. These programs represent a significant overlap with the nationally-recognized education programs of the Federation.

“Todd Holbrook is going to do an absolutely great job as the Georgia Wildlife Federation’s next CEO,” said Matt Nichols, chair of the board, in the release. “His education, experience and leadership ability alone qualify him for the position, but his great reputation, his passion for wildlife and habitat conservation and his energy and enthusiasm are what carried the day for our board of directors. Todd is a great person, and we look forward to working with him to ensure a bright future for the Georgia Wildlife Federation and for Georgia wildlife.”

Previous Article
Airport vendor who hosted $1 million fundraiser for Obama at his Midtown home to defend his status as a DBE
Next Article
16 Georgia nonprofits rank among top 400 U.S. charities in donations