Tom Houck experienced key moments of the Civil Rights Movement firsthand, and since those fateful days he has been keeping the spirit of racial justice alive in Atlanta through his civil rights bus tour.

Houck started the tour six years ago, spending his days driving around the city and teaching folks about the history of the Civil Rights Movement in Atlanta, sprinkled with personal anecdotes and sage wisdom. The reason for starting the tour, he said, was “a void” in Atlanta’s history books.

“There were some walking tours, but they didn’t take people to places like South-View Cemetery, which is so important to the history of Atlanta,” he said. “It didn’t take you by [Ralph] Abernathy’s church… or Alonzo Herndon’s house, Atlanta’s first Black millionaire.”

Houck is determined to help fill in the blanks, with his jam-packed memory bank in tow.

Meet the Man Behind the Tour

Not many people can say they’ve lived on a street named after their former boss and mentor. Thanks to Martin Luther King, Jr., Houck can. Always hungry for activism and racial justice, Houck remembers thinking at 13 years old, “I’m going to help change the world.”

Houck went to a segregated white high school in Jacksonville, Fla., named after Nathan Bedford Forrest, a Confederate soldier and early leader of the KKK.

Despite the racist undertones, Houck was vocal about supporting integration at his school and, as an editor of the school newspaper, corralled about 100 students to petition for changing the name from “Forest Acorns” to “Justice.”

The school responded with a two-week suspension. 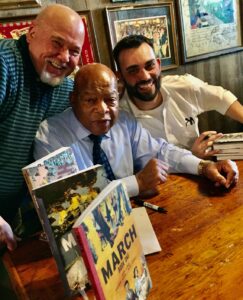 But his principal’s opinion wasn’t his biggest concern; Houck’s eyes were on the Selma-Montgomery march. Houck jetted off to Selma with a friend in tow, both about 17, where he met members of SNCC and SCLC.

“I was determined at that point to stay in the movement rather than go on to college or finish high school,” he said.

He was arrested during the protest, the first of about 20 times.

After these arrests and separation from his friends and fellow demonstrators in segregated jails, he helped file the 1966 Lee v. Washington lawsuit in Birmingham, Ala., when the Supreme Court ruled in favor of integrating prisons.

Houck met King at a Freedom House in Atlanta, where members of SNCC and SCLC gathered to rejuvenate and talk strategy. King needed help responding to his piles of letters and asked if there were any good writers in the room willing to help. Houck raised his hand.

He didn’t only answer mail. Houck spent a lot of time with the King family as their driver and helped create an SCLC Department of Peace to protest the Vietnam War.

Houck recalled some Civil Rights leaders balking at King’s focus on war, but “He saw war and civil rights as being the same thing.”

He also worked alongside King in the Poor People’s Campaign, advocating for labor rights and affordable housing.

“What Dr. King wanted to do with the Poor People’s Campaign was [to] put on the agenda of America that there was no blank check for justice,” Houck said.

After King was assassinated, Houck stayed with the SCLC for another year and then worked on the Voter Education Project with John Lewis and Julian Bond. They focused on voter mobilization and campaigned for lawmakers to ratify the 26th Amendment, which changed the voting age to 18. 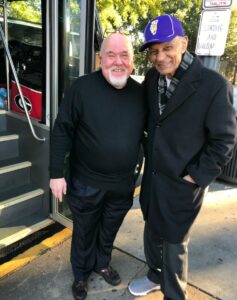 In the ‘70s, Houck worked on several successful political campaigns, including Maynard Jackson, Andrew Young and John Lewis. He remained close friends with Lewis until he passed away last year.

Houck’s worn several hats since then, but he keeps coming back to civil rights.

When considering what makes this city special, Houck said, “I think Black people made Atlanta great.”

SaportaReport writer Allison Joyner recently took Houck’s tour to rediscover her hometown and learn more about its rich history. Take a look at the tour from her eyes.

I Thought I Knew Everything About the Civil Rights Movement. I was Wrong.

Houck is an Atlanta treasure. His on-the-ground involvement in the Civil Rights Movement and intimate relationship with some of its key players gives him a unique perspective and a wealth of institutional knowledge from that critical time in American history. 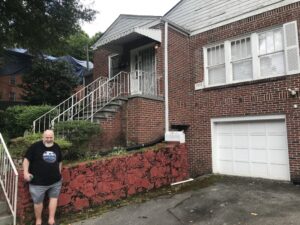 His route is purposeful and the education offered along the way is impactful. Starting at the birth home of Dr. Martin Luther King, Jr. felt resonated and harkened back to that critical moment in time.

Departing King’s home, the tour visited 15 locations including the Freedom House on John Wesley Dobbs Blvd. where Houck stayed and worked as a young man and the new Rodney Cook Park in Vine City where a statue of former Congressman John Lewis wearing the Presidential Medal of Freedom was recently revealed.

While we were in Vine City, Houck took us to Sunset Ave and showed us the last house owned by Dr. King. A frequent visitor of the home, Houck told us that the King home had a piano in the front room and a bust of Gandhi in the living room.

But when the tour was winding down, the tour bus took us to historical sites that I would never have thought of as historical at all and that was the final resting places of these foot soldiers of freedom.

However, there were many stops on the tour that weren’t so obvious. As the tour was winding down, we visited lesser known historical sites including the final resting places of Rev. C.T. Vivian and Joseph Lowery – both foot soldiers of freedom. 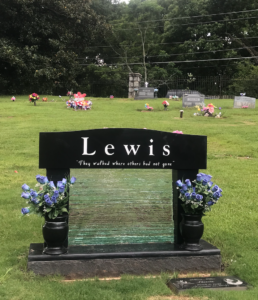 Many people have visited South-View Cemetery to pay respects to the late John and Lillian Lewis. (Credit: Allison Joyner)

Additionally, South-View Cemetery off of Jonesboro Road is another important site. Morehouse president Dr. Benjamin Mays was interred there before being moved to his final resting place at the historically black college, and Dr. Martin Luther King, Jr. laid there before he was transported to the King Center.

There, a beautiful headstone for the late John Lewis also struck a somber chord. Crosses, flowers, letters and American flags were among the mementos left by those paying respect to the man who got into “good trouble.”

The last and final stop was the Oakland Cemetery on the east side of town. Although Confederate soldiers are laid to rest there, Houck told us that Maynard Jackson – the first Black mayor of Atlanta –  selected his plot there to show how far the city has come. 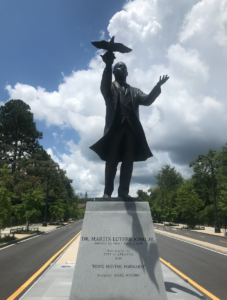 As we were driving back to The King Center, where the crypt of Dr. King and his wife Corretta rests, the thoughtfulness of Houck’s tour hit me. The full circle of the experience was apparent at that moment. To hear the first-hand experiences of how so many people fought for me to be able to write this article with my co-worker – who doesn’t look like me – makes me appreciate my heritage a hundred times more.

Each year hundreds of Atlanta transplants like myself move to the capital city, but never give themselves an opportunity to discover their new hometown. So if you’re new to the city or if you’ve lived here all your life, go on Houck’s tour, discover your hometown anew, and find out why Houck – and the community at large – need to keep these stories alive.

Houck gives his Civil Rights tour every Saturday at 11 a.m. To book a seat on Tom’s tour, sign up on the official website.