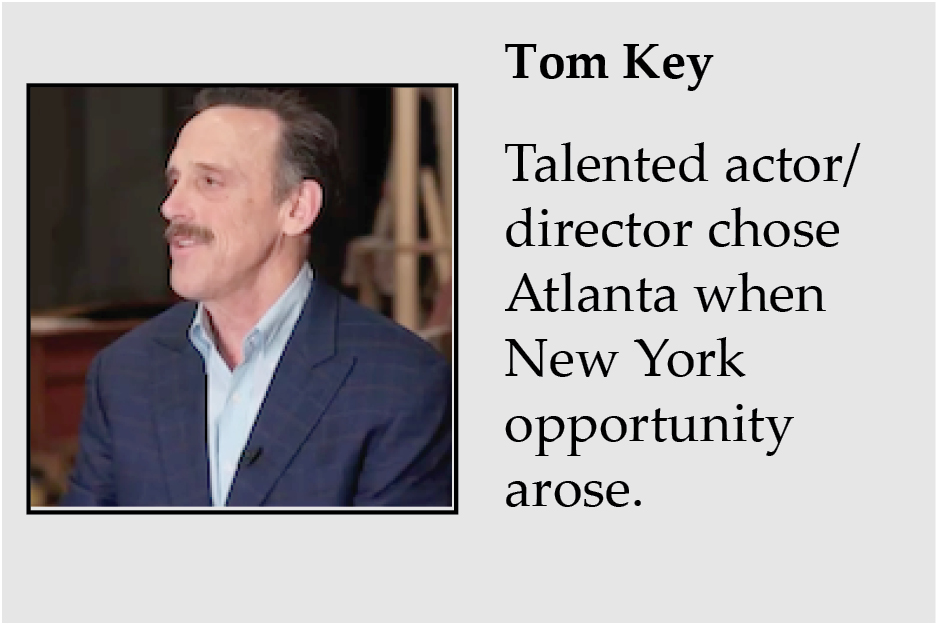 Tom Key has graced Atlanta audiences with many dramatic productions at Theatrical Outfit and the Alliance Theatre, but the curtains rose on his own dramatic Moment 26 years ago when he was offered a chance to lead a theater in New York City.

With echoes of nightly off-Broadway standing ovations for his one-man show still ringing in his head, Tom instead chose to nurture his talents in Atlanta – his “home place in the American South.”

It was 1986 and Tom and his wife and two young sons were in the process of moving from Dallas, Texas, where he had worked for two years, including the completion of a successful seven-month run of Cotton Patch Gospel. Tom had adapted the play from a series of Clarence Jordan novels and included songs written by composer and lyricist Harry Chapin. It opened in 1981 to nightly standing ovations as the inaugural show at the Lambs Theatre’s on 44th St. and received rave reviews from publications as diverse as Rolling Stone and Christianity Today.

After a six-month run at the Alliance and in Dallas, Tom and his wife Beverly were trying to decide where to showcase his talents next. The Birmingham, AL native narrowed it down to New York and Atlanta and had been in Georgia for about a month when Carolyn Rossi Copeland called and offered him the artistic director position at the Lambs.

“We were longing to get back to the center of the theater world in New York – or to Atlanta, because Atlanta had begun to seduce us, had begun to appeal to us and draw us and beckon us back to her.

“We both grew up in Alabama, but Atlanta is my home place in the American South. I loved the literature of this part of the world, I love the music in this part of the world, the food, the people, the graciousness of this city, particularly the way Atlanta had responded to the civil rights crisis. Atlanta also was evolving as a place where a professional performing artist could earn a living.”

“And so we were either going to move back to New York or Atlanta and we took a week to visit New York and old friends and we decided to move to Atlanta. Just as soon as we had gotten here and sort of set up shop and I had auditioned for my first role as stage manager in “Our Town” at the Alliance, Carolyn called to offer me the job in NYC.

“It stopped me in my tracks,” Tom recalled. “I felt like if, wow, if you had asked me this four months ago, I would have been calling U-Haul that day to move back to New York but we had gone through this thought process about Atlanta. I had this metaphor, this idea, this image that came to me that was very strong and I shared it with Carolyn and it’s why I turned down the job and chose to live in Atlanta.

I love New York. I really do and to me it’s like the ‘State Fair of The Theatre.’ where the prize-winning tomatoes are judged, but you don’t grow those prize-winning tomatoes in the soil of the midway, and I wanted to grow in my career not only as an actor but also as a director and as a writer, and ultimately I really wanted to create a place where the literature and history of the American South could come forward, could be given dramatic voice.”

Tom remembered when he had been at college and told his parents he was bringing a new friend back to Birmingham for Thanksgiving. His friend, an African-American, would not be welcome in Birmingham, his parents told him. The family rift led Tom to leave college and cut off his parents’ underwriting of his education (he later finished college on his own). While he patched things up with his family eventually, the experience left him with a commitment to being a part of how the fractures in the region could be healed, especially through the community-building power of stories shared in the theater.

Since 1995, when he was offered the position with Theatrical Outfit, his production selection has stayed true to his heart, offering classic American stories such as “To Kill A Mockingbird,” “Driving Miss Daisy” and “Gee’s Bend” alongside first-time international debuts of John Kennedy Toole’s “A Confederacy of Dunces” and Walker Percy’s novels and essays.

Tom has great expectations for the Atlanta theater community and for the larger community of mankind. In his 2007 Keynote Address to the Southeastern Theatre Conference in Atlanta, he said, “I want to make a comment on what I personally believe is our greatest challenge, not as thespians, but as human beings. At present, I think our greatest challenge is to learn to live with one another and the planet, or perish. That is, we are going to have to evolve from tribes to a world community. We are going to have to make a transition from the endless entropic tragic cycle of revenge and retribution to the creative healing process of understanding, respect and reconciliation.”

In 2005, the theater board undertook an ambitious $5.5 million fundraising effort, which resulted in the Atlanta’s third-oldest professional theater company being able to create the nation’s first LEED-certified Balzer Theater in the historic space once occupied by Herren’s, the first restaurant in Atlanta to voluntarily integrate in 1962.

“Dr. Lee and Delores Shelton, who were the first African-Americans to eat at Herren’s, are today subscribers and patrons of Theatrical Outfit,” Tom recalls proudly. “We’re feeding the spirits of Atlantans with stories that stir the soul, creating discussion on those topics that truly enrich and strengthen the civic discourse, right in the heart of our city.”