Grandeur. Cambridge defines it as: the quality of being very large and special and beautiful. And a Google search of the term yields over 88 million hits. But you don’t have to look far and wide for it in Atlanta. Just visit the sprawling new greenspace on the Westside and ascend the winding slope just off the central meadow. The magnificence will smack you in the face. 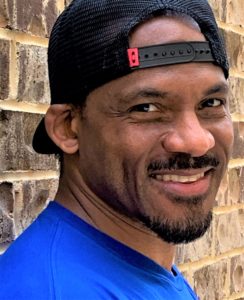 In the City of a Hundred Hills, this may be our grandest. Not only because of the vast beauty and stunning aerial view, but also because of the treasure rising from the layered vestiges on which it sits.

Phase 1 of Westside Park is slated to bring to the stage oodles of greenspace, recreational fields, tailored trails, art structures, public gathering spaces, set-aside areas for wildlife, and its centerpiece – a 2.4 billion gallon water reservoir for the city’s emergency drinking supply, constructed from the old Bellwood Quarry, a ginormous 45-acre, 400-foot hole in the ground.

When all developed in years to come, with additional leisure and natural amenities fleshed out over 280 acres, the park will be our biggest, boldest greenspace. Its backstory is pretty deep too.

For nearly a century until shutting down in 2008, the site functioned as a quarry where rock was blasted, cut, crushed and sold as foundational and building material for roadway projects and other infrastructure. Over time, a bevy of streets, sidewalks, homes and other buildings in town were built in part with granite extracted from the quarry. 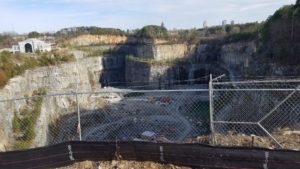 The final stages of preparation of the quarry before the inflow of water turns it into a reservoir for Atlanta. The Downtown Atlanta skyline is in the distance. Credit: Sundiata Rush

Originally, the grounds were home to the Bellwood Convict Labor Camp, run by Fulton County. In yesteryear, chain gangs of local prisoners busted, moved and loaded rock product at the quarry. Historical accounts describe the work as grueling and the conditions hostile. Similar to other labor camps of the era, a majority of the workers were African American, many all but forced into hard labor as a result of prison sentences stemming from controversial Black Code laws. Notable prisoners to spend time at the Bellwood Camp include Jim Conley, who was also questioned in the murder of Mary Phagan at the National Pencil Company, and Hugh D. Gravitt, who was convicted of driving the vehicle that hit Margaret Mitchell.

In later generations, operation of the quarry changed hands to private companies, though the county maintained ownership of the property. Ironically, those prisoners bound together for work back in the day could have not foreseen that the land on which they labored would come to be a key link in a whole different type of connection for advancing the city.

Today, a billion young blades of lustrous green grass stand tall awaiting their calling. Tomorrow, strikers will leverage their traction as they stride to score goals; yogis will test their resilience as they flow thru sun salutations, and the backsides of large groups will seek their cushion and as they sit, lie and cuddle for movie night under the stars.

Today, foxes and raccoons run through remote areas of the site searching for their next meal. Tomorrow, runners of the BeltLine Marathon (run almost entirely on dedicated trails) will start and finish at Westside Park, where they’ll splurge on fuel-replacement treats in the meadow and enjoy a post-race party and concert at Bellwood Amphitheater. 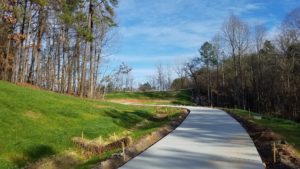 This trail leads uphill to the overlook of the former quarry. Credit: Sundiata Rush

Back in the late ‘70’s, part of MARTA’s original plans called for rail transit to go through northwest neighborhoods up to Rockdale, near what is now the West Highlands area, former site of the Perry Homes community. That quest derailed in the ‘90’s and today the line stops short, at Bankhead Station along Donald Lee Hollowell Parkway – formerly Bankhead Avenue, and before that Bellwood Avenue.

Interestingly, Bellwood Avenue is where the Riverside Line – the last of the city’s original streetcar lines to be shut down in the ‘50’s – operated to service Westside communities. Tomorrow, light-rail BeltLine transit will forge further north, along Marietta Boulevard and aside Westside Park, offering area residents a convenient rapid-transit option to connect into the spine of the city’s system.

Riders of the Atlanta BeltLine Bus Tour often cite the quarry locale as the highlight of their 3-hour excursion exploring sights, progress and plans of the project. It’s easy to see why. In addition to the gorgeous vista, a number of key tenants of the BeltLine plan are set to bloom on these grounds. The relocation of the Birth of Atlanta sculpture from Underground Atlanta to the park syncs with this new dawn. Fitting then, that the site’s transformation benefits from a fortunate twist of timing….

In 2004, The Trust for Public Land commissioned famed landscape architect Alexander Garvin to do a study on connecting greenspace around the city in conjunction with the loop of transit proposed in Ryan Gravel’s BeltLine thesis. Garvin’s landmark report – The BeltLine Emerald Necklace: Atlanta’s New Public Realm – recommended a string of parks (Piedmont, Boulevard Crossing, Maddox, etc.) be connected along the BeltLine corridor like jewels around a necklace.

Though quite impressed with the Bellwood site’s potential to be an extraordinary park, Garvin was hesitant to include it in his report initially because, with the operating lease for the property still in effect for another 30 years (till 2034), some local leaders thought the far-reaching goal was unrealistic. However, in conferring with TPL and revisiting the intention to be bold and aspirational with what was achievable in the plan, even if the timing for some pieces was distant, he did include it in the report, and put a big fat picture of the quarry on its backside cover. Inside, he called ‘Bellwood Lake Park’ the “largest and most ambitious BeltLine jewel,” and recommended that the quarry be converted to a lake and its surroundings remade into a park with recreational amenities bordered by new residential development.

Public response to the study was overwhelmingly positive. When Vulcan Materials Co., the most recent operator of the quarry, saw the report, they too were taken aback by the imposing future plans projected for the site. Already debating their long-term presence at Bellwood given a gradual decline in demand for its rock products, and likely further influenced by growing pushback from community members about its blasting, Vulcan considered how they might wind down their operations much sooner than later. Shortly thereafter, they contacted the county and asked to be released early from their lease. Approximately 12 months later, that deal was done, paving the way for the city to buy the property – the first substantial land acquisition for the BeltLine – and begin planning its redevelopment.

And just like that … fueled by a grand vision in support of an audacious plan, what was forecasted for much further down the road, manifested in a fraction of the time. And the fruits to be borne are emerging today.

Today, high on the hill, tall ageless pines share silent reflections of days gone by, and the squawks of soaring falcons echo off giant walls of granite. Tomorrow, on the overlook, group selfies with the Atlanta skyline in the background will go viral, and light applause will turn heads when anxious gents drop to one knee to pop the big question to their boos. 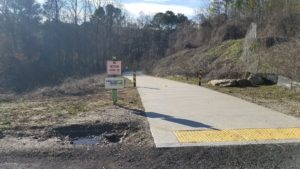 Tomorrow, a web of deft new trails will weave thru manicured greenspace to frame areas of the park and allow access to places only few have been. Trees Atlanta will lead outdoor learning strolls thru a flagship section of the BeltLine Arboretum. Spur paths linking to the Proctor Creek Greenway will provide direct connections south to Grove Park and Maddox Park, and north to the Chattahoochee River and beyond. And bikers anywhere on the loop will be able to ride out to Westside Park, take a gateway extension northwest into Smyrna, and hop on the Silver Comet in route to Alabama.

Over the years of mining at the quarry, one of its most demanded products was “Crusher Run”, a mix of granite, trap rock and limestone. This gravel-like material, often used as the underbelly for new road paving, is still being produced in the area, albeit a different way. Right next door and just east of the park, Dykes Materials Recycling, recognized for its LEED (Leadership in Energy and Environmental Design) oriented processing methods, produces a recycled version with content sourced mainly from old roadways and concrete structures in the metro area. 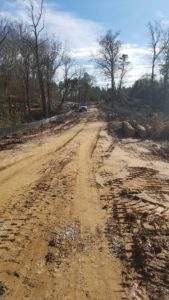 A mixture of trees are cleared from the site of the former quarry to make way for roads through the Westside Park. Credit: Sundiata Rush

Though they can’t say for sure, company reps acknowledge that there’s a slight chance the Crusher Run they sell contains some stone material (perhaps a very small amount) that originated from Bellwood Quarry. Today, developers are still using it to build, construct and pave in our city. Tomorrow, community festivals benefiting local sustainable initiatives will be held in the park, where eco-friendly artists will sell hand-made emerald necklaces and bracelets with glistening park-shaped jewels linked together and a large Westside gem as its signature pendent.

Tomorrow, on the BeltLine, the shine of Westside Park will stretch much wider and way further than its footprint.

Bolstered by attractive state tax incentives for film productions, many movie and TV projects shot in town in recent years have used the striking aesthetic of the quarry and its surroundings as the backdrop for integral scenes, including in installments of The Walking Dead, Fast & Furious, Hunger Games and Stranger Things. It’s no surprise that these major titles would be linked with such a pioneering park. Soon, it’s our turn to be stars of the show.

Some wonder what the storyline will be when future phases of Westside Park debut. But the tea leaves have already told….

In 2016, the city held a contest to nickname the monstrous, $11 million-dollar custom-assembled drill that would bore a 5-mile, 12-foot diameter tunnel – now the deepest in the state – to connect the quarry to the Chattahoochee River via the Hemphill Avenue Water Works facility and fill the quarry pit with enough water to increase Atlanta’s emergency drinking supply 10-fold. Over 700 names were submitted online by residents. When runners-up “Peach Beast” and “Scarlett” were bested by “Driller Mike” – a nod to our hometown rapper/activist/entrepreneur Killer Mike – we all knew that the city’s ethos was continuing to evolve. That destiny was knocking on the door again. That Forward Atlanta still drives our DNA.

Tomorrow, on the BeltLine is a forward-looking narrative of the BeltLine’s promise, and the places, spaces and culture to undergo remarkable change.

Note to readers: Sundiata Rush is a native and transplant of Atlanta who’s been involved for more than a decade with the Atlanta BeltLine. 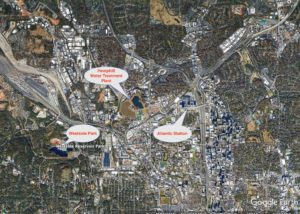 Westside Park is located in a longtime industrial area of Atlanta that is being redeveloped with residences, retail and work spaces. Credit: Google Earth, David Pendered 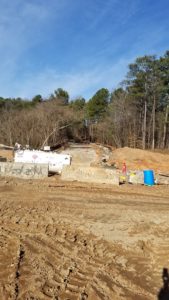 The Westside Park will be traversed by a number of roads built for the purpose. Credit: Sundiata Rush 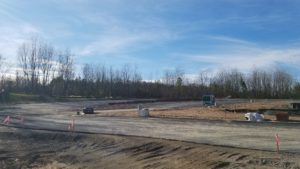