The deputy secretary of the Department of Housing and Urban Development said Thursday in Atlanta that Georgia did not spend its $99.4 million share of the $25 billion National Mortgage Settlement as the federal government had intended. 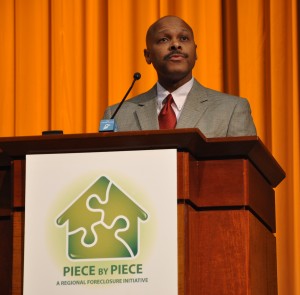 HUD Deputy Secretary Maurice Jones said during his remarks at the annual “Piece by Piece” meeting that he was “disappointed: by the way Georgia spent its share of the National Mortgage Settlement. Credit: Donita Pendered

Maurice Jones, who is HUD’s second most senior official, said he was “disappointed in what I’ve seen in Georgia.” Jones was the keynote speaker at a the annual meeting of, “Piece by Piece: A Regional Foreclosure Initiative,” which was held at the Carter Center.

Clayton County Commission Chairman Eldrin Bell asked Jones what the federal government was doing to respond to Georgia’s decision. Jones responded that the administration had three approaches to states that, like Georgia, had used the money for purposes other than for mortgage resolution.

“Georgia leaders’ use of the state’s share of settlement funding for purposes other than settlement funding is not what we intended,” Jones said. “I don’t want to start preaching to the choir, but there is plenty of work to be done.”

The rub involves the $25 billion in relief for borrowers and government that was reached in February by the federal government and attorneys general in 49 states.

Click here to visit the web page maintained by the executive committee of the attorney’s general who reached the settlement.

In Georgia, instead of earmarking the settlement funds to resolve mortgage woes, as some say was the intent of the settlement, Gov. Nathan Deal and state lawmakers opted to use the funds to promote job creation. That’s the point Georgia’s commissioner of economic development, Chris Cumminsky, made in a recent guest column in saportareport.com.

“Employed people pay mortgages,” Cumminsky wrote in his guest column that appeared the week of July 2. “So rather than subsidize additional public dependencies, the state of Georgia will incent private investment that directly provides jobs for the unemployed.

But promoting jobs isn’t the use of fund that President Obama’s administration expected from the settlement, according to Jones. Rather, the idea was to help homeowners stay in their homes.

That was the point made in a June 17 guest column in saportareport.com by Kate Little, president of the Georgia State Trade Association of Nonprofit Developers.

Little noted in her column that the settlement directed the money be used to “fund housing counselors, provide legal aid, and other similar purposes determined by state attorneys general.” Georgia’s attorney general, Sam Olens, determined the state Constitution required the funds be deposited into the state’s general fund and spent according to the wishes of the Legislature and governor, Little wrote.

Piece by Piece is a regional effort to address the foreclosure problem in metro Atlanta. It has nearly 150 partners and sponsors include the Home Depot Foundation, Enterprise Community, NeighborWorks America, and financial institutions including Bank of America, Chase, PNC Bank, Regions, and Wells Fargo.