The footbridge to be built across an interstate highway near Kennesaw is the latest example in metro Atlanta of a new bridge built solely to help people walk, bike, skate or scoot on a trail system. 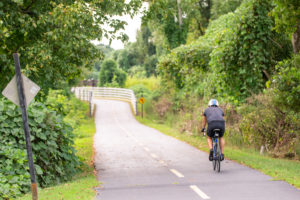 The Town Center CID has helped build a network of trails that connect neighborhoods and communities in northwest Cobb County. Courtesy: TCCID

These bridges are to overcome barriers that traditionally were crossed by bridges built for vehicles. Three such structures are part of local trail systems that eventually are to provide access to the Atlanta BeltLine and the vision of a 100-mile trail along the Chattahoochee River, as outlined in the Chattahoochee Riverlands project.

The Kennesaw project already emphasizes the power of trail connectivity – a trailhead near Town Center at Cobb connects to a multiuse pathway that ends in Anniston, Ala.

The three pedestrian bridges are located at: 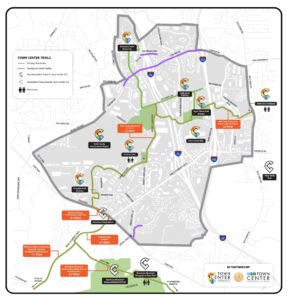 A pedestrian bridge across U.S. 41, in the lower left of this map, will improve connections from the Town Center CID’s trail network to other trails in Cobb County. Courtesy: TCCID

In Cobb County, the Noonday Creek Trail bridge is part of a trail network that connects neighborhoods and communities. One form of this network is a program of shared bicycles. Since its start in 2015, the program has grown from a handful of bikes to 45 bikes, according to Tracy Rathbone Styf, executive director of the Town Center Community Improvement District. Over 50,000 shares in Town Center alone have been recorded.

“For us, that’s the broader, long-range vision for what can be in the northwest portion of Cobb,” Styf said.

Reality has exceeded the vision, at least in terms of the scope of connective trails. The Noonday Creek Trail extends to Anniston, Ala., considering all the connections.

From a trailhead in the Town Center CID, the trail system passes Kennesaw Mountain, Marietta and enters the Cumberland commercial district near Smyrna. There, the regional trail connects with the Silver Comet Trail and its 94.5-mile paved pathway that ends in Anniston, Ala. when the 33 miles of Alabama’s Chief Ladiga Trail are included with the Silver Comet Trail. This route is part of the 300-mile regional trail network created by the PATH Foundation. 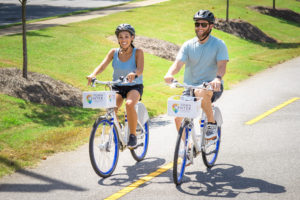 The bike share program has garnered some 50,000 rides since its start in 2015 by the Town Center CID. Courtesy: TCCID

In northwest Cobb County, the regional trail system and the broader community vision are a joint project of the Town Center CID and a non-profit entity it helped establish, the Town Center Community Alliance, led by Executive Director Jennifer Hogan. The relation is similar to the Buckhead CID and Livable Buckhead, the nonprofit entity developing PATH 400.

“Jennifer and the board of Town Center Community Alliance are working on ways to expand and activate the trail with public art, rest areas, pocket parks and exercise areas,” Styf said.

Aviation Park is one such example. Plans for the park began as a conversation about public access to bathrooms with the folks at Cobb County International Airport-McCollum Field. From there, the talk grew to an aviation-themed park with a curated exhibit of the mechanics of flight and the history of aviation in Cobb County, Styf said.

Park visitors now have a safe place to watch planes as they come and go, and Georgia Power has provided funds toward the $400,000 educational component that Kennesaw State is to help develop. 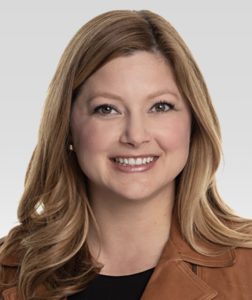 As the region emerges from the coronavirus pandemic, the public’s appetite for trails and greenspace is expected to continue. Styf holds that view, as does Denise Starling, Livable Buckhead’s executive who’s overseeing construction of PATH400.

“Trails have proven their value during the past year as people looked for ways to improve their mental and physical health through exercise and outdoor interactions with friends,” Starling said. “That value will just continue to grow as more trails come online and connect to one another.”

Styf placed trails in the context of the Town Center CID’s efforts to promote a sense of cohesion and connection in a region with realities that include three major highways – U.S. 41, I-75 and I-575.

“For Town Center CID, the overall vision is to create a place where people want to be, that is forward thinking, is diverse, has a rich commercial area as well as residential areas around it, that incorporates Kennesaw State and its 42,000 students in a meaningful way,” Styf said. “Trails address a lot these issues, not just for transportation and mobility but for health and access. Trails are a major opportunity.” 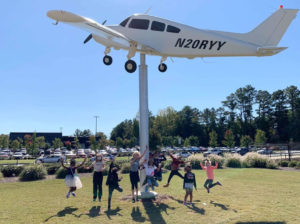 Aviation Park provides a place to rest and watch airplanes as they come and go from Cobb County’s airport. Future plans call for an educational center on the mechanics of aviation and its history in Cobb County. Courtesy: TCCID 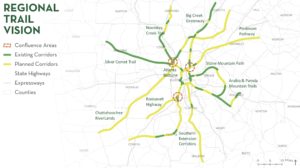 The majority of regional trails already in place are in Cobb and north Fulton counties. They are to connect to trails planned throughout metro Atlanta, according to this vision by the Atlanta Regional Commission. Trails on this map may extend beyond the boundaries of the ARC. Credit: ARC