Trade trip to China is region’s first to focus on exports, less on Chinese investment here

For the first time, Atlanta-area business leaders will visit China with the main goal of selling goods and services rather than bringing home foreign direct investment.

China has an appetite for metro Atlanta’s products including bio-tech, health care, information technology, and some of what the region is well known for – architecture, construction and engineering services, according to Ric Hubler, director of global business growth for the Metro Atlanta Chamber of Commerce.

China has an interest in bio-tech products such as the wireless monitoring devices for human bodies being developed by CardioMEMS, an Atlanta-based medical device company. Credit: CardioMEMS

“China is a very large market with phenomenal growth and abundant business opportunities for Atlanta companies,” said Hans Gant, the chamber’s senior vice president of economic development. “International trade leads to the type of quality jobs that we want to create here in metro Atlanta, and it makes our companies stronger in the global economy.”

The trade mission in late March, to be headed by Atlanta Mayor Kasim Reed, was specifically designed to visit cities that are a good fit for Atlanta-area businesses, Hubler said. The local mission trip has been in planning since early autumn by a collaboration of the mayor’s office, Invest Atlanta (nee Atlanta Development Authority), and the chamber.

In October, Gov. Nathan Deal led his first state delegation to China and Korea to seek bi-lateral opportunities for trade and investment.

The governor’s group visited Beijing, where the state has a trade office; Changsha, home of Sany Heavy Industries, which opened its North American headquarters in Peachtree City; and Qingdao, home of Hisense Corp., an electronics giant that has its North American office in Suwanee and an R&D facility in Johns Creek.

The metro Atlanta delegation is seeking out new business ventures in three cities – Nanjing, Hangzhou, and Guangzhou. While there, the group will maintain metro Atlanta’s historically strong push for inbound investment from China. The chamber typically conducts two trips a year to China to foster business relations, Hubler said.

“The cities we chose are because of their economics, and strength, and how they match up to our companies,” Hubler said. “We wanted to focus on cities where we could make immediate business-to-business connections.”

In focusing on offering products the Chinese want, Atlanta is pulling a page from one of the nation’s earliest trade missions to China – from the Boston area. 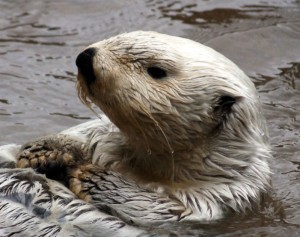 Pelts from the Northern sea otter were traded by Boston merchants to Canton merchants in an 18th century example of lucrative trade. Credit: American Cetacean Society

Soon after the Revolutionary War, in 1789, Boston-area merchants needed to establish new trade partners and products. China beckoned, but Massachusetts’ only product that interested the China market was ginseng, according to “The Maritime History of Massachusetts,” (1921) by Samuel Eliot Morison.

The Boston merchants speculated the Chinese would like pelts. The merchants funded two ships to sail from Boston, around Cape Horn to the Northwest Coast, and acquire pelts of Northern sea otters – said to be finest fur in the world. Russian furriers had discovered the area some 50 years earlier.

The pelts were a hit in Canton and the ships returned to Boston ladened with Hyson tea, silk gowns and Canton chinaware. The cargo sold for immense profits and an ongoing exchange was created, according to Morison’s account.

Hubler said the comparison between the early trade mission of Boston and that of Atlanta today is apt. The chamber routinely conducts two trips a year to China seeking investment in metro Atlanta. Now it’s time to try to sell desired products directly into China’s vast economy.

“We have the products and services that appeal the Chinese market,” Hubler said. “We just have to make the connections.”

The trip is scheduled March 23 through March 31. The registration deadline is Feb. 3 and estimated costs start at $3,700 per person. For information contact Invest Atlanta or the chamber. 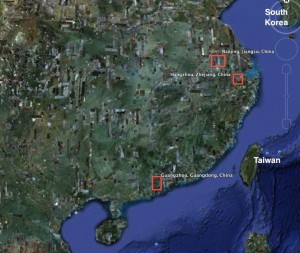 The trade mission from metro Atlanta will visit three cities in China: Nanjing in the north; Hangzhou in the east; and Guangzhou in the south. Credit: Google Earth, David Pendered