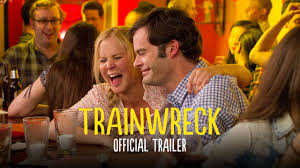 "Trainwreck" - image of the official trailer

Amy Schumer is a Nora Ephron for a New Millennium.

She’s coarser, and she’s also more cutting edge. Granted, she and Ephron had to fight very different battles to validate themselves in a mostly male game  But like Ephron, Schumer is one clever dame, with a sweet spot of romanticism right in the middle of her smart-girl snap.

She’s also had to deal with fame on a far more accelerated level than Ephron ever did.  The prizewinning writer/director, who died (too young) in 2012, had time as a journalist to develop her voice before hitting Hollywood.

In the Internet age, Schumer has skyrocketed to the center of the social chat room before a lot of people even know who she is. By which I mean, they’ve heard of her, but they don’t necessarily know her work, her sensibility, her comic backhand, so to speak. So “Trainwreck,” her first movie (as writer and star), could’ve easily been, well… a train wreck. 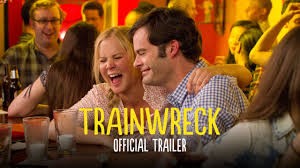 “Trainwreck” – image of the official trailer

Instead, it’s a hugely entertaining romantic-comedy that even dares to poke fun at the granddaddy of all late 20th-century comedy-romancers. Namely Woody Allen, who gets his very own “Manhattan” homage (with bite).

In “Trainwreck,” Schumer plays…well, okay, she plays the guy’s role. She’s Amy (who else?), a commitment-phobic magazine writer (possibly the quaintest note in the entire film. Print? Really?).

She likes her liquor hard and her men harder (bodied…). Staying over after sex isn’t her style. Neither is the Happy Suburban Family template embraced by her younger sister (Brie Larson).

Then her boss at S’Nuff (the sort of self-satisfied, pseudo-hip rag that specializes in pieces like “Ugliest Celebrity Children Under Six”) assigns her an article about a sports doctor (Bill Hader) to the stars.

Pretty soon, the doctor and the devilish writer are in bed. But Conners is a bonafide Good Guy.  He likes Amy. He may even love her.

This, of course, scares the hell out of her. “What’s wrong with you that you want to be with me?” she asks.

“Trainwreck” does several very smart things. First off, the director is Judd Apatow, whose acolytes like to point to his cult TV show, “Freaks and Geeks,” but who, nonetheless, broke onto Hollywood’s A-list with a depressing piece of (fill in the blank) called “Knocked Up.”

But Apatow knows exactly how to present his neophyte writer/star. He appreciates her.  He doesn’t let her go all Carol Burnett/Phyllis Diller (meaning, the big joke here isn’t that she’s a sexually undesirable woman). There isn’t even the patented Streisand transformation from Odd Duck to Swan.

Schumer changes inside.  She learns about the Big Stuff — trust, commitment, sleeping over, how to talk to children, etc.

Adding the sports context is another brilliant stroke. Here’s a “chick flick” full of star-athlete cameos.

Finally, someone has provided this newbie with a sensational supporting cast.  An almost unrecognizable Tilda Swinton plays Amy’s crisp, crazy S’Nuff boss. Colin Quinn is her feckless dad who explains to his little girls at the top of the movie that monogamy is like being allowed to play with only one doll. Plus, there’s a small army of SNL-ers — from Vanessa Bayer as a S’Nuff colleague to Leslie Jones in a one-scene cameo as a fellow subway rider.

However, as much as “Trainwreck” benefits Schumer, it does even more for Hader. Hollywood handsome, he’s been floating around in different movies, trying to find his post-“SNL” niche.  Here, he pulls off the near-miracle of making the Nice Guy likable, funny, sexy and even someone to root for.

Actually, we root for them both. Which, if you remember, is how they used to make romantic comedies.

And to answer a question Schumer herself posed in a beyond-brilliant sketch/parody of the ‘50s morality play, “12 Angry Men”:  is Amy Schumer hot enough to be on TV?