Atlanta is such a transient city.

It’s a city that has demolished many of its greatest landmarks – including Terminal Station, Union Station, the Loew’s Grand Theatre, and so many more.

And it’s a city that changes the names of buildings, institutions and streets with little regard to the historic perspective that contributed to the development of Atlanta.

As a result, we’re a city often lost without anchors and roots. We are a city that has attracted millions of people to live or to visit, but we often don’t provide the backstory of our city – good and bad. 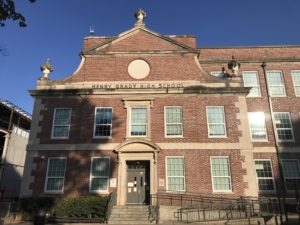 The Atlanta Board of Education has decided to change the name of Henry W. Grady High School, and it has ignored the pleas of hundreds of alumni who urged to keep the Grady name on the school.

The reason? There was a groundswell of students who wanted the name changed because they claimed Grady was a racist. History is actually much more complicated and nuanced. Henry Grady was a product of his time, a man who contributed greatly to the evolution of Atlanta as the capital of the New South.

Because I believe in learning from history, I urged in this column for the name to be changed to honor both Grady and Yolanda King, who graduated from Grady in 1972 during a critical time during the full integration of the school.

But the Atlanta Board of Education Naming Committee did not include the option of naming it Grady-King High, a missed opportunity to have the name speak to the history and evolution of Atlanta.

Instead, the choices are:

The poll asked people to click on their role, and the options were: Grady Cluster Student, Grady Cluster Faculty/Staff, Grady Cluster Family Member and Community Member. Notice that people who are Grady Alums were not included. It’s distressing to me that the Atlanta Board of Education is alienating and ignoring such a vital constituency able to contribute to the ongoing success of one of the top high schools in its city.

An email thread of more than 100 alumni who wanted to preserve the Grady name in some way had a consistent message.

Although the high school will get a new name, chances are it will continue to be referred to as the school that used to be Grady High. That’s the way things go in Atlanta. 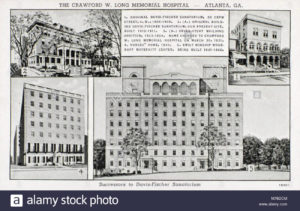 Less than four months after celebrating the 100-year anniversary of Crawford Long on Oct. 21, 2008, Emory wiped off the hospital’s namesake – replacing it with the generic “Midtown” name and erasing an important part of Georgia History.

Dr. Crawford W. Long was a Georgia physician who discovered sulphuric acid or use as an anesthetic and was the first doctor to use anesthesia during surgery. 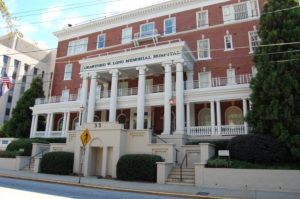 A photo of the historic Crawford Long Hospital (Special: Wikipedia)

Both my children were born at Crawford Long, and I will always refer to the hospital by that name. Interestingly enough, the hospital was originally known as the Davis-Fischer Sanatorium on Linden Avenue and it was renamed Crawford Long in 1931.

Long time Atlanta natives may remember Davison’s, the grand department store on Peachtree Street with more than a dozen elaborate chandeliers and a marble main floor.

Davison’s was acquired by Macy’s, and for a while it operated with a hyphenated name. But in 1986, Macy’s dropped the historic Davison’s name. But many Atlanta natives continued to call it Davison’s until Macy’s closed the signature downtown store in 2003. Now the building has a sterile, unimaginative name: 200 Peachtree.

The historic logo of Davison’s

And it’s not just buildings. The renaming of streets is an Atlanta past-time, one that is rooted in the city’s segregated past. Within a mile or so, Charles Allen Drive (the street in front of Grady High) becomes Parkway at Ponce de Leon Avenue and Jackson Street at the stretch that includes Ebenezer Baptist Church.

One that I will never understand is when the Atlanta City Council changed the name of a portion of Fair Street in 2012. The street that meanders through the Atlanta University Center’s campuses was renamed Atlanta Student Movement Boulevard. But almost everyone still calls it Fair Street for simplicity’s sake. A plaza with markers in honor of the 1960s Atlanta student movement would have made much more sense.

So, Atlanta is a bit like a city of shifting sands – a place that’s constantly changing and erasing its past. A city that keeps wiping away its soul.

Take Paris and the Arc de Triomphe, which was built as a celebration of war designed to mark Napoléon’s victory at Austerlitz in 1805. Napoléon met his match at Waterloo in 1815, before the monument was finished. And while war and Napoléon are not universally embraced by Parisians today, the Arc de Triomphe stands tall, creating a unique sense of place and international renown.

If Atlanta wants to join the league of world-class cities, it needs to quit erasing history. It needs to learn to live with its past so that it can embrace its future.

Previous Article
Collins, Loeffler snipe at each other, not Democrats, in Senate debate
Next Article
TEA Walk – CPACS – Oct. 2019-17 – Photos by Kelly Jordan