DeKalb County has no plans to ask voters this year to raise the sales tax to pay for transit expansion, according to DeKalb CEO Michael Thurmond’s office. The decision leaves unfunded projects including the one to serve the area at Emory University. 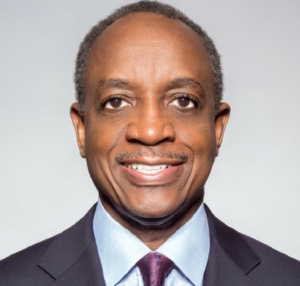 An email from the CEO’s office on the status of decision-making over the transit funding states, in full:

Meantime, Gwinnett County’s Board of Commissioners continues to advance a transit plan.

The board has not called a transit referendum. The board did present a wish list for transit projects that’s been updated since voters rejected a MARTA referendum. The wish list includes all transit projects that Gwinnett would build if it were unconstrained by financial limitations. From this wish list the commissioners and their partners could identify projects for a constrained list to present to voters – at some point in time.

In DeKalb, proceeds of the proposed sales tax would have helped pay for a planned light rail system to link MARTA’s Lindbergh Station with the Clifton Corridor, the area that includes Emory University, the national headquarters of Centers for Disease Control and Prevention, and a number of regional destinations.

The project had support from DeKalb commissioners and MARTA. 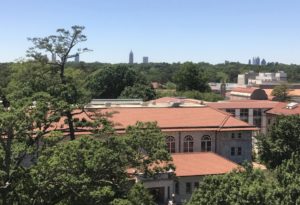 The view of Atlanta’s skyline above the rooftops of Emory University reminds of their proximity, yet they are not directly linked by a dedicated transit service. Credit: Kelly Jordan

DeKalb’s Board of Commissioners voted unanimously in July 2019 to adopt a Master Transit Plan that included the project. Some in the conversation have been calling for a sales tax referendum in November 2020 to pay for the proposed transit enhancements.

Either rate is allowed under provisions of the legislation that created the Atlanta-region Transit Link, the ATL. DeKalb is authorized to implement a sales tax of up to 1 percent.

Thurmond did not provide a ringing endorsement to either option. Political questions at the time included Thurmond’s potential campaign for the U.S. Senate, or if he would seek to retain the CEO position. Thurmond chose the later. 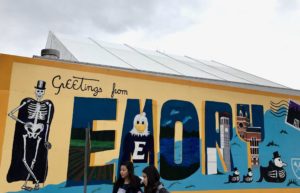 A mural that decorated a wall during a construction period celebrated Dooly, the mascot Emory University. Credit: Kelly Jordan

Even now, plans can be established. The county appears to have about two months before it would have to take the official steps to call a referendum, according to state elections law. The two months would provide time for meetings with mayors and to give the county’s elections superintendent time to advertise the ballot question.

Launching a campaign for a sales tax increase is a different question, in light of issues including the economic downturn fueled by COVID-19.

MARTA’s Board of Directors voted in 2018 to include $350 million for a light rail expansion toward Emory in its $2.7 billion list of construction projects. Specifically, MARTA’s program list says the Clifton Corridor will consist of: “About 4 miles of grade separated light rail transit (LRT) service from Lindbergh station to a new station near Emory.”

MARTA also has taken the prerequisite steps to obtain federal funding for the project by identifying it as a locally preferred alternative. 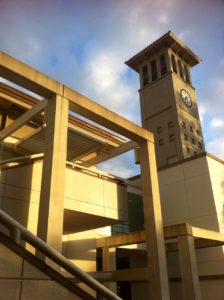 Cox Hall’s Clock Tower has become a destination for those seeking iconic images on the campus of Emory University. Credit: Kelly Jordan