Thursday was a day for celebration.

The elected officials who served on the Atlanta Regional Transportation Roundtable savored the moment after casting their final vote to create a $6.14 billion program to improve the region’s roadways and transit. Thursday was not the day to dwell on the task of convincing voters to agree to pay for the plan through a 1 percent sales tax.

“We’re not going to get bogged down in any of those issues,” Atlanta Mayor Kasim Reed said in response to a reporter’s three-pronged question: Whether to move the sales tax vote from July to November; the duration of the tax; and who will govern the region’s transit.

Here, in their own words, is a snapshot of Thursday’s celebration. 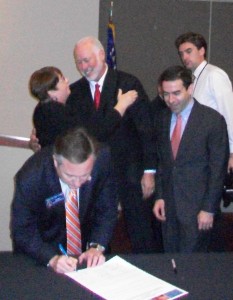 Their victory was fulfilling a state mandate to devise, by Oct. 15, a list of transportation improvements that can be paid for with sales tax revenues the state forecasts will be raised within the next decade. This group was not charged with the political task of passing the sales tax referendum.

Each of the following officials served on the five-member executive committee that cut an initial wish list of about $23 billion in proposed projects to the draft list of $6.14 billion in projects.

The smaller plan, with amendments, was approved Thursday by a unanimous vote by the full roundtable. Members cast their vote in a standing ovation. They contend this plan will position the 10-county region to build its economy, increase the number and quality of jobs, and provide a better quality of life.

But first, here is the distribution of funds by mode. Click here to read the full report.

“About 20 years ago, at Underground Atanta, I was director of the bid band for the Atlanta Olympics…. On the morning it was announced who was going to be the city, it was about 6 a.m., it was a chilly morning…. We expected it would be close, but Athens was the favorite…. When [Olympics President Juan Antonio] Samaranch said that ‘A,’ it seemed to last an hour and a half. When he said, ‘Atlanta!’ total pandemonium broke out.  It was exuberance beyond belief. I feel a lot like that today.”

“The Olympics is an appropriate way to start this conversation. The city and region invested $3.5 billion hard in the ’96 Games … which changed our community forever. It really put us on the map in a unique and powerful way. Now we have the opportunity to invest $7 billion to $9 billion, with federal contributions, over 10 years, which will place our city and region at the center of economic investment in infrastructure in the United States…. No matter what happens next year, we have shown you have leaders who are willing to take on problems.”

“We had an unprecedented amount of citizen involvement…. Thank you to our wonderful citizens in this region, who took time to participate…. The Legislature did a wonderful favor for this region when they put us face to face at that table, talking to one another and seeing each other’s hearts, and realizing that we all have the same interest in quality of life … and moving this region forward.”

“There were a lot of people who thought we couldn’t do it. Guess what – we proved them wrong. We also made sure we protected the interests of our local constituents. That’s a problem with any type of large undertaking. Everyone wants their fair share. We had to put that aside. A lot of counties here made a contribution to the region. We have to thank those counties. We learned a lot about ourselves and how we work together across boundaries … toward a common goal, and that is a great metro Atlanta region.”

“I don’t know the outcome of the Transportation Investment Act [referendum] in July. But I do know the TIA has been successful thus far…. We listened to each other. We need to sit down and work together … and we showed that we can do just that. That can only be good for the Atlanta region. The reason we did a good job was because all our roundtable members were present for all our meetings, from Day 1. I look forward to a successful July vote in moving the Atlanta region forward and keeping the Atlanta region competitive with the rest of the country.”

“It was a transparent process. It was a process that would make even those aggravating people in Decatur proud. It has been an incredible process…. The thing that will bring voters into the voting booth and vote yes is the quality of life. When they see what this list is going to do for them, when they see the vision this group has put forward for the next 30 years, they’re going to vote yes…. This is an opportunity to say: ‘I’m going to cast a vote for the future of the region.’ I’m optimistic. The region has reason to be optimistic. I look forward to selling this program and the difference it will make in their lives.” 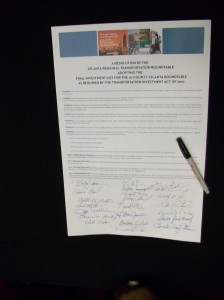 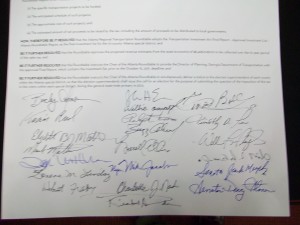