Over the next year, MARTA expects to spend up to $700,000 maintaining its train tracks, grinding them into proper shape and otherwise ensuring they will safely carry trains.

The amount may not seem terribly huge for a system with a total annual budget this year of more than $740 million. The project also seems to be an expense that could be deferred in the expectation that it could be funded with MARTA’s portion of the proposed 1 percent sales tax for transportation, which will be on the ballot July 31.

Except, proceeds of the sales tax could not be used for the rail maintenance project, a top MARTA official said. And the reality of the need for routine maintenance, in and of itself, speaks to the ongoing challenge of maintaining and operating the system – especially in an era of MARTA’s own declining local sales tax revenues and the uncertainty of federal funding for transit nationwide.

This one rail maintenance project illustrates the broader issue of maintenance as the region prepares to vote on the sales tax proposal. The plan includes $600 million for MARTA’s “state of good repair” costs to be spread across the 10-county region.

The 10 projects that were included in MARTA’s “state of good repair” list include:

Currently, MARTA’s only source of local tax funds for routine maintenance repairs is the 1 percent sales tax collected in Fulton and DeKalb counties.

In addition, more maintenance funds for other transit projects will be required from the region in the future. More than 52 percent of the $6.14 billion the tax is to raise over a decade is earmarked for transit developments. 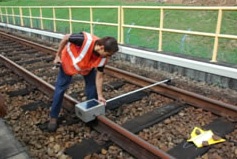 MARTA’s current proposal to maintain its track is now out for bid. There are three contracts – one to grind rail; one to check rails for proper alignment; and one for an ultrasonic of rail track and attachments to make sure none have defects that are invisible to the human eye.

Garry Free, MARTA’s director of maintenance of way, who’s been with the agency for 32 years, says the three operations are the type of work most people never consider when they think about the costs of transit systems.

“A lot of this stuff, nobody ever knows we X-ray the running rails, or that we go out and measure distance between the two running rails,” Free said. “These are the other costs of us doing business that nobody thinks about, but that we have to do.” 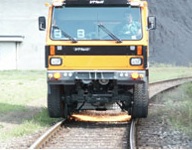 Safety is a key reason for maintaining track. According to a manual titled, “Railway Vehicle Derailment and Prevention,” by Huimin Wu and Nicholas Wilson:

“Railway vehicle derailments are the results of wheels running off the rails, which provide the support and guidance. The reason for wheels running off rails can be very complicated. However, the final scenario of derailment can result in wheels climbing off the rail, rail gauge widening, or rail rollover that causes wheels to fall between rails. Therefore, any conditions that may reduce the lateral guidance provided by rail can increase the risk of derailment.”

Free said that was an accurate description of the reason MARTA maintains its rails.

Still, the costs have to come out the operations budget, not the capital improvements fund, Free said. That will remain the case even if voters approve the 1 percent transportation sales tax referendum, he said.

“This maintenance project is not eligible under [transportation sales tax] funding because it is an operating expense,” Free said.

“Unless we’re physically replacing a rail, we have to pay for this type of work out of operating funds,” Free said. “We do have one contract now where we are replacing running rail. That would qualify for [transportation sales tax] funding because it’s a capital project.

“But, we can’t use [transporation sales tax] funding for operating costs.”