Metro Atlanta voters now have something tangible to consider when they think about voting next year for a 1 percent sales tax for proposed road and transit improvements.

A list of just over 100 projects, priced at $6.14 billion, was approved Monday by a 5-0 vote by a group of mayors and county chairmen who comprise the Executive Committee of the Atlanta Regional Transportation Roundtable.

The split between roads and transit started the day at about 45 percent for roads and 55 percent for transit. The final split appears to be in that ballpark, and committee staffers were busy late Monday digesting the final figures after four hours of negotiations.

The committee started its day with a spending plan that was about $420 million over budget.

The committee voted 4-1 to reduce that overage by earmarking $120 million in federal dollars that are intended as contingency funds for other projects. 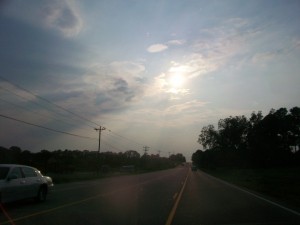 Henry County is mostly rural, such as this along this stretch of Ga. 42 south of McDonough, and needs more road improvements than transit, said Henry County Chairman B.J. Mathis. Credit: David Pendered

Henry County Chairman B.J. Mathis voted no, saying that road projects not on the sales tax list might need the contingency sum.

That vote left a shortfall of about $299 million. The paring was so tight that the smallest was $300,000, for the planned Fayetteville bypass.

Here are some of the larger changes to that project list that were approved by the committee:

Atlanta Mayor Kasim Reed helped seal the final deal by visiting Gov. Nathan Deal during a break. Reed returned with the governor’s commitment to fund about $80 million out of the $180 million that had been earmarked for GRTA, the state entity that runs the Xpress commuter bus service.

Reed said it was “a big deal” for the committee to end the day with a unanimous vote, which presents voters with a unified vote by the core group designated by state law to develop a solid transportation tax proposal.

Reed predicted the sales tax will be approved by “50 plus one” voters.

“I think it’s going to be hard the entire way,” Reed said after the meeting. “We face a complex tapestry of citizens we’re hoping to satisfy. Reaching across 10 counties is difficult because we have so many constituencies.”

The negotiations illustrated the divergent nature of the 10 counties the state threw into the same pot to develop a regional transportation system.

Elected officials had to consider the maxim that “all politics are local,” even as they were urged to “think regional.” A clogged intersection at home can be as significant as spending millions to maintain MARTA or build a commuter rail line from Atlanta to Griffin.

“The needs of the outer counties are totally different from the inner counties, and they need to be recognized,” said B.J. Mathis, the Henry County chairwoman who resisted intense pressure to support the commuter rail line.

“When you look at transit, you have to look at density,” Mathis said. “We’re still very much a rural county, just like these [urban core] counties were 10 years ago.”