Editor’s note: This is the first in a series of periodic reports on freight logistics in metro Atlanta and Georgia.

The nation’s reliance on moving freight in trucks on highways is a considerable challenge as metro Atlanta and state leaders look for solutions to traffic congestion and other impediments to the speedy flow of freight through Georgia. 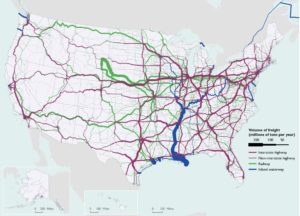 In Georgia, trucks transport significantly more freight than is transported by trains. Red lines denote truck freight and green lines show rail freight in this analysis of 2018 data by the U.S. Department of Transportation. Credit: bts.gov

The magnitude of truck shipping is plain in the National Freight Strategic Plan, issued in September 2020 by the U.S. Department of Transportation.

In Georgia, the latest freight flow map from the federal government, 2018, shows that highways are used to transport the vast majority of freight through the state. The major corridor is I-75, from Macon through Atlanta to near Chattanooga. Macon is the convergence of I-75 and I-16, and near Chattanooga the highway diverges for the Midwest and Northeast.

This section of I-75, in Georgia, transports over 100 million tons of freight a year.

The companion map on rail transport shows the major rail corridor is between Jacksonville, Fl. and Columbus. The route continues to a rail junction near Birmingham. 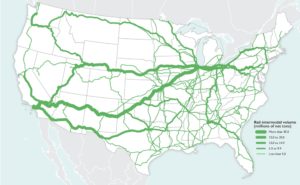 The major rail route in Georgia links Columbus with Jacksonville, according to a report by the U.S. DOT. Credit: bts.gov

This section of rail transports from 10 million to 15 million tons a year. This figure counts only the type of freight typically carried by truck, in a container or trailer. This doesn’t count freight conveyed in the familiar boxcars, hopper cars and tank cars.

The amount of freight shipped in Georgia is expected to increase significantly. The ARC predicted in 2016, its latest report, that manufacturing will rise by 2040 and with it the transport of goods. In addition, more freight is to be shipped through Georgia to and from the state-owned port in Savannah.

A harbor deepening project intends to attract a new generation of ships that can transport much more cargo than the world’s current fleet. The project cost in 2019 was estimated at $973 billion, in state and federal spending. The port is pursuing initiatives to increase its capacity to ship cargo on rail, including the construction of three inland ports where rail transports to and from the seaport cargo that’s delivered by truck to the inland port. 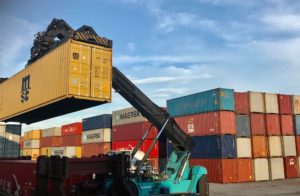 Rail transports less than 10% of the nation’s total tonnage in freight, according to the U.S. DOT. Credit: Kelly Jordan

Meantime, reviews of the freight network in the state and Atlanta region have been commissioned by the Georgia General Assembly, Georgia Department of Transportation and Atlanta Regional Commission.

At the state Capitol, lawmakers studied freight movements in 2020 and recommended that the Legislature convene them again to continue to study the matter.

The report by the Georgia Commission on Freight and Logistics determined an investment in road and rail of up to $4 billion a year is needed, for each of the coming 30 years. Georgia’s current budget is about $26 billion. One potential funding source is public private financing. Georgia highways are being or have been expanded through public private financing, including the I-285/Ga. 400 interchange and I-75 in Cobb County.

The commission recommended the Legislature vote to extend the commission’s existence for an unspecified period of time. 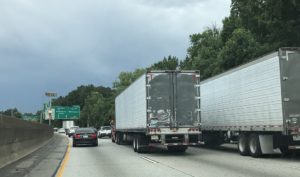 Trucks add to congestion on I-285, near the highway’s intersection with I-20 westbound. Credit: David Pendered

GDOT is conducting a review of its own freight and logistics plan, which was adopted in 2012 and updated in 2018 to comply with the federal FAST-Act (Fixing America’s Surface Transportation). The American Trucking Research Institute named the plan the second-best in the country.

The Atlanta Regional Commission has commissioned a new look at freight, acting in its capacity as the federally recognized planning organization with responsibilities related to mobility. The ARC announced the review in December.

Public private partnerships were one of the recommendations in the ARC’s latest report, issued in 2016:

Previous Article
Don’t expect a boring Georgia legislative session after the year we’ve had
Next Article
Sheep in wolves’ clothing head up the docket in riot’s aftermath, as the real wolves lurk