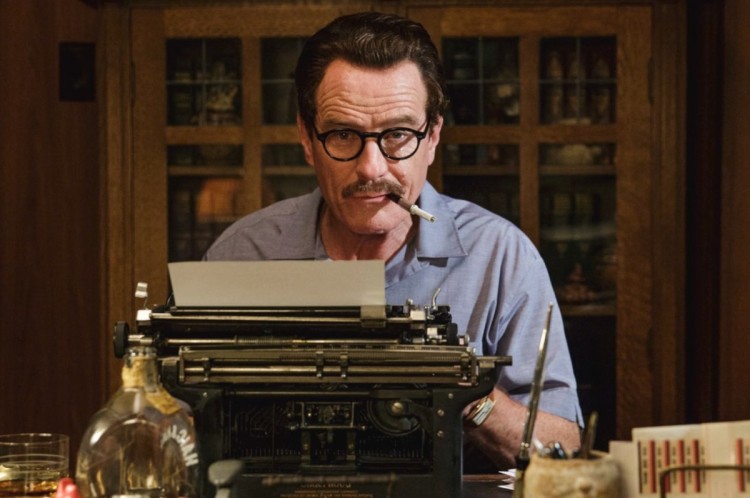 The less you know about Dalton Trumbo, the more you may like “Trumbo.”

“Breaking Bad’s” Bryan Cranston stars as the irascible, witty and courageous screenwriter whose movies include “Roman Holiday” and “Spartacus.” 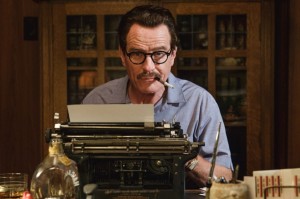 In some circles, however, Trumbo is even better known as one of the Hollywood Ten, a group of writers and directors who were sent to jail during that ugly period known as the Hollywood blacklist.

Director Jay Roach doesn’t do much right, but he certainly knows his money shot. He leads with a huge close-up of Cranston – seated naked in a tub, with a whiskey, a cigarette and some writing material spread out on a board.

This, apparently, was how Trumbo liked to get in touch with his muse.  It worked. One of Hollywood’s best, he won two screenwriting Oscars. However, because the witch-hunt stayed in place (unofficially) long after Trumbo and the others had served their time, the writer was forced to use pseudonyms.  Thus, Ian McLellan Hunter won the Oscar for “Roman Holiday” and Robert Rich for “The Brave One.”

Trumbo’s name didn’t appear on screen until 1960, when Kirk Douglas – egged on a bit by an obstreperous Otto Preminger – gave him full credit for “Spartacus.” This gesture was more than merely symbolic; it broke the blacklist for good.

The film’s first hour is dismayingly didactic. Welcome to, “A Child’s Guide to the Blacklist.” An example: Trumbo’s little daughter, sitting on her Appaloosa pony, asks Daddy if he’s a Communist and, for that matter, gee, Daddy, what is a Communist anyway? (If any readers care, Daddy answers with a parable about sharing a sandwich.) 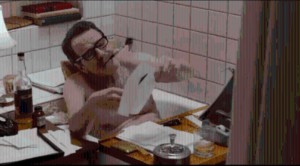 Bryan Cranston in the money shot of ‘Trumbo’ – in the bathroom seeking his muse. Credit: uncova.com

Roach trots out the usual suspects: John Wayne (hiss); MGM mogul Louis B. Mayer (hiss); gossip columnist supreme, Hedda Hopper (double hiss … and applause; she’s played by Helen Mirren who cheerfully tucks her every scene into her purse and makes off with it).

Luckily, an hour in, the picture gets smart (well, smarter) and a lot less smug. That’s because the most familiar territory has been dealt with – the Congressional hearings, the naming names, the taking the Fifth, the prison sentences.

In the movie’s second half, we see what Trumbo had to do once he was out of jail – and yet still couldn’t “officially” work in Hollywood.

Jokingly dubbed a “swimming-pool Socialist” before things got serious, Trumbo is accustomed to the good life (remember that pony?).  Plus, he’s got a wife (game-wasted Diane Lane, beaming like a madhouse June Cleaver) and a family to support.

The only work he can find is for the King Brothers (one of whom is jauntily played by an amusingly crass John Goodman). Their pictures don’t even aspire to bargain basement level. A typical story conference goes something like this: King Bros. to writers:  “Hey, we gotta gorilla suit sitting around; can you write something with a gorilla in it?”

Well, Trumbo can write something with a gorilla in it – and does. Before long, he’s created a small cottage industry, churning out scripts under names like Sally Stubblefield and John Abbott.  He then brings in other writers in the same predicament. They are mostly represented on screen by Louis C.K’s fictional Arlen Hird, a character so disjointedly conceived that nothing he does makes much sense (or makes us care much about him).

Cranston is a very good actor.  But too often, the director – whose credits include the “Austin Powers” and “Meet the Parents” franchises – feels the need to bolster Cranston’s every utterance.  This is a great man, we are meant to understand – part H.L. Mencken, part Atticus Finch, part, well, Spartacus.

“Trumbo” may do very well during the upcoming awards season. After all, much like the similarly mediocre and posturing, “Argo,” it’s about Hollywood’s favorite subject: Hollywood.

That said, there’s one moment that almost justifies such self-adoration: A brief taste of “Roman Holiday,” in which we are blessed with Gregory Peck and Audrey Hepburn at their most magical.

Previous Article
Brian McGowan joining Atlanta office of law firm Dentons
Next Article
BeltLine’s Eastside Trail to be extended through use of eminent domain, if necessary