Metro Atlanta has not forfeited many state funds to maintain local roads, despite the higher local match that results from voter rejection of the transportation sales tax in 2012, according to an analysis of figures in a new state report. 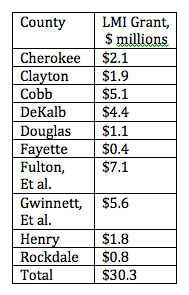 The figures seem to alleviate concerns that routine road maintenance could suffer because of penalties built into the state law that allowed for the transportation sales tax referendum. GDOT expects to release the new report shortly.

The 10-county region has drawn down $30.3 million from the Georgia Department of Transportation. Eight local governments did not meet the filing deadline and tentatively have left a total of $430,203 in GDOT coffers – money that probably will be distributed elsewhere on a needs basis.

Click here to download an attachment that shows the amount of state funding each jurisdiction in metro Atlanta will receive, or has left in state coffers by choosing not to apply for the grant.

Incidentally, House Speaker David Rawlston may be breathing new life into an old piece of legislation that would raise money for transportation improvements. House Bill 195, submitted last year by Rep. Ed Setzler (R-Acworth), was recommitted to the (more friendly) Transportation Committee from the Ways and Means Committee, where bills often are sent to die.

HB 195 would enable two contiguous counties to call a transportation sales tax referendum to pay for projects within their borders. Atlanta Mayor Kasim Reed made a similar suggestion following the demise of the TSPLOST referendum in metro Atlanta – with Reed calling for Atlanta and DeKalb County to create their own district.

The original TSPLOST law, passed in 2010, required a tripling of the local match for state road maintenance dollars in the TSPLOST regions that rejected the sales tax.

The local match was increased from 10 percent to 30 percent of project costs.

The issue of the increased local match was one of several concerns raised by local elected officials in 2011 and 2012.

As elected officials debated the list of projects to be funded by the TSPLOST, some wondered if routine road maintenance would suffer if voters rejected the proposed sales tax. At the time, local tax revenues were still in a freefall and the question was whether jurisdictions that rejected the tax would have the money to provide the local match.

Despite the TSPLOST’s failure in metro Atlanta and eight of the other 12 regions, local governments have been able to raise the local match, according to the report.

So far, the GDOT program has provided well over $100 million of the $120 million provided in the current FY 2014 budget. Other requests, though late, are trickling into the department.

“Making the local match, to our knowledge, has not been a huge issue,” said GDOT Deputy Commissioner Todd Long. “Over 98 percent of the FY ’14 money is being accounted for. … So, I think we’re going in the right direction.”

Long said he expects up to 99 percent of the funds to be collected by local jurisdictions. The remainder will be allocated to jurisdictions that have unforeseen problems to fix, such as roads that wash out during storms, or to promote economic development projects, such as a hospital in Cherokee County.