The Georgia and Florida governor’s races have so many parallels that we can expect them to be paired in a lot of stories analyzing politics over the next couple of months. Whether the two races have a parallel outcome is another question.

DeSantis isn’t Brian Kemp, exactly, but his sweeping victory over former congressman and state agriculture commissioner Adam Putnam in the Florida Republican primary last week bears a lot of resemblance to Kemp’s defeat of Lt. Gov. Casey Cagle. There was a similar dynamic of the old Republican order versus the new populist wave. Kemp didn’t actively court Trump’s favor in the way DeSantis did, but both are running this fall squarely under the Trump brand name.

Kemp promotes himself as “politically incorrect,” but at least so far he has been savvy in his incorrectness, talking read meat in his ads but avoiding blowups like the one which followed DeSantis’ remark about how Gillum would “monkey up” the progress his state has made. (It may be, however, that in the politically incorrect playbook, blowups are considered a good thing.) 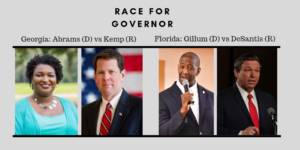 Gillum had a much wilder ride to the Florida Democratic nomination than Stacey Abrams did in Georgia. In early summer his polling numbers were barely above single digits in a crowded field, but he waged a campaign which should strike fear in the hearts of television station managers, and is likely to be closely studied as a template for the future.

His better-funded opponents bought more television time, but Gillum text-messaged 750,000 Democratic voters and put what his campaign billed as “the most progressive ad in Florida history” online. It’s a 30-second spot packed with as many unapologetically liberal positions as its producers could flash on screen, and it connected with the sentiments of a lot of Florida Democrats.

If we’re trying to draw parallels, Gillum seems closer to former Atlanta Mayor Kasim Reed than to Abrams, not only because they are both mayors, but because both have the shadow of a federal investigation hanging over them. Gillum says he has been assured by the FBI that he’s not a target of the investigation, but a lobbyist and close friend who did business with the city is at the center of it. DeSantis lost no time after the primaries pinning the responsibility for the scandal on the mayor.

No matter how adroitly Gillum handles the issue on national TV, the Tallahassee investigation is going to be a much greater drag on his campaign than the issue in Georgia of Abrams’ $200,000 debt, which she talks about in her stump speech almost as if she’s hungering for the moment Kemp brings it up in a debate.

Another big difference is that Georgia is a runoff state and Florida isn’t. Gillum won his party’s nomination with 34 percent of the 1.5 million who voted in the Florida Democratic Primary, while Abrams soundly defeated her only Democratic opponent, Stacey Evans, with 76 percent of the vote. We don’t know how Gillum would have fared in a runoff with Gwen Graham, who trailed him in the primary with 31 percent of the vote.

These numbers don’t tell us how either of these races will end up, but they tell us where they start. Abrams has been campaigning as her party’s nominee since May, while Gillum started the week before Labor Day. Both these races look like the Republican’s race to lose, but based on all these factors, Georgia looks like the state where it would be easiest for that to happen.

Both races are going to be nationalized to some extent, but more so in Florida. That could change the political equation we’ve sketched out. Also, DeSantis looks more likely to get in his own way than Kemp, and Gillum more than Abrams. But it’s only Labor Day.

Previous Article
“Ebenezer, Historic and Modern” by Kelly Jordan
Next Article
Why We Celebrate

Georgia Aquarium steps in to care for threatened manatees