The Coca-Cola Co.’s annual meeting has turned into a mirage of dual realities.

The 2011 annual meeting at the Cobb Galleria Centre opened with a splash. Coca-Cola 125th Anniversary Young People’s Chorus — all 125 teenagers dressed in red shirts — sang an enthusiastic rendition of “I’d Like to Buy the World A Coke” (also known as: “It’s the Real Thing”).

They went on to sing another five songs from all over the world — leading the packed audience of 1,000-plus shareholders — to clap along. The chorus then was treated to a warm standing ovation.

Muhtar Kent, Coca-Cola’s chairman and CEO, then makes a dramatic entrance — welcoming shareholders by celebrating the 125th anniversary of the soft drink company that was founded in downtown Atlanta.

“This now marks our third year in a row where we are conducting our annual meeting in Atlanta,” said Kent, referring to the 2009 and 2010 meetings that were held in Gwinnett County. “We are getting closer and closer to downtown every year. We heard you.”

Kent went on to say: “We thought it was only appropriate to be here this year to say ‘thank you’ to our Atlanta shareowners and this remarkable community that Coca-Cola has proudly called home for the past 125 years.”

Those comments were warmly received by shareholders.

Then came a video outlining the company’s successes over the past year ending with Kent describing himself and the company on tape as “constructively discontent.”

Then Kent addressed shareholders from stage.

“Our stock, your investment, is up 23 percent since the meeting last year,” Kent said. “But make no mistake We’re not about to take a victory lap. In fact we’re just getting started. We’ve just scratched the surface of our potential.” 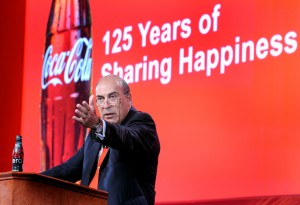 But a whole different version of reality surfaced during the official part of the meeting when the company’s various proposals were presented to shareholders.

Several out-spoken shareholders accused the company of a myriad of crimes — murder, rape, union-busting, unethical business practices — in various countries, including Colombia, Guatemala and even the United States.

The activist shareholders ignored the two-minute rule and every other company-imposed rules of the meetings so they could their messages across. One of the perennial angry shareholders — Ray Rogers — engaged in a shouting match that culminated with him telling Kent: “You are a liar. You are a liar.”

Then some shareholders started questioning the company’s practices on health-related and environmental issues. What kind of water Coca-Cola puts in its Dasani plastic bottles. The possibly harmful use of BPA that is used inside the lining of its canned drink products. The medical consequences of using aspartame in its diet drinks.

In responding to the often-angry questions and comments, Kent kept repeating that none of the charges were true, and that all the accusations had been vetted by independent, third-party entities and were found to be baseless.

One especially loud shareholder started yelling and walking up toward the board of directors at the front of the room, and Kent asked that security personnel at the meeting escort the man out of the meeting.

That was greeted with a strong applause from the large crowd of company-friendly shareholders.

The contrast between the two realities was so great that one shareholder talked about the “disconnect” between the happy, optimistic messages presented by the company and the vile accusations from several shareholders. She then urged shareholders to take it upon themselves to “seriously” study the concerns that had been raised. 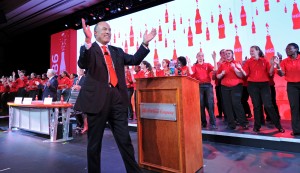 The 125 young people’s chorus made a heart-thumping return — singing the song: “Open Happiness” and getting the audience to clap and sing along. They passed out Coca-Cola served in red contour bottle-designed cans so the roomful of people could participate in a choreographed celebratory toast.

Thus the 135-minute-long meeting ended on a high note.

Former U.S. Sen. Sam Nunn, a Coca-Cola director, said the meeting reminded him of when he would hold town hall meetings with constituents.

“It’s the same issues and the same people every year,” said Nunn, with no hint of impatience. As he saw it, it was corporate democracy in action. “I thought Muhtar did a great job.”

And then speaking like a true Georgian, Nunn said: “I think it’s great having the meetings in Atlanta.”