Editor’s note: This story has been updated to correct the location of the Georgian Terrace.

Sometimes in Atlanta, the news about historic preservation is measured in terms of buildings that weren’t demolished. This is one of those times.

The Atlanta City Council has approved a deal that will reduce the economic pressures to further develop the Georgian Terrace. The council authorized the owner to sever the development rights of the property and sell them at some point in the future to the owner of another parcel in Midtown. 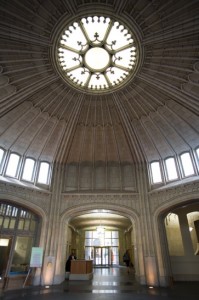 The famed rotunda in the Healey Building was to connect with a second Healey tower, which was not built. Credit: prime8photo.com

In the heart of Atlanta’s downtown business district, a “For Sale” sign is hanging on the second floor office condo at the Healey Building. The proposed sale, priced at $840,000, indicates there are no dramatic changes planned for the building that was renovated in 2007.

The council voted unanimously at its June 3 meeting to approve the request involving the Georgian Terrace. The building is owned by an entity named CSC Georgian Terrace Limited Partnership, which state records show is based in San Francisco and was incorporated in Georgia in 2005.

The owner was seeking authorization to sell the excess development rights of the Georgian Terrace property. Without such an approval, the owner had the right to increase density at the historic parcel located at 659 Peachtree St., across from the Fox Theater.

There’s no buyer in sight for a deal that would be called a transfer of development rights. But the Georgia Terrace’s owner does want to have the ability to sell the rights should a buyer appear, according to Sharon Gay, the attorney handling the request.

“It’s a very elegant solution,” Gay said in April of the concept behind the TDRs. “It’s a great idea for the protection of historic properties, in that you can sell the development rights for real money … and protect that property from future development.” 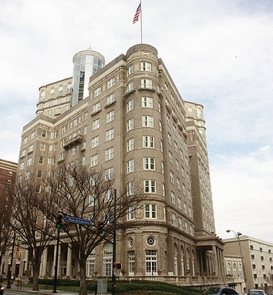 The owners of the Georgian Terrace are taking steps toward selling development rights to another property in Midtown. Credit: etraveltips.com

The Healey Building was constructed in 1914 and was Atlanta’s last major skyscraper built before World War I, according to the building’s records at Atlanta’s Urban Design Commission.

The Healey’s were movers and shakers in Atlanta both before and after the Civil War. They owned the land where the building was erected and had plans for a twin tower that was to be connected to the first tower through the building’s famed rotunda according to the AUDC:

Bowers, the inveterate downtown booster, trumpets the attributes of downtown as much as the condo in the listing provided by his real estate company: Atlanta’s central business district has seen $2.9 billion in investments since 2007, plus $182 million in infrastructure improvements; the higher number of jobs per square mile in Atlanta; and a fast-growing residential population comprised of young people with higher incomes, according to the sales flyer.