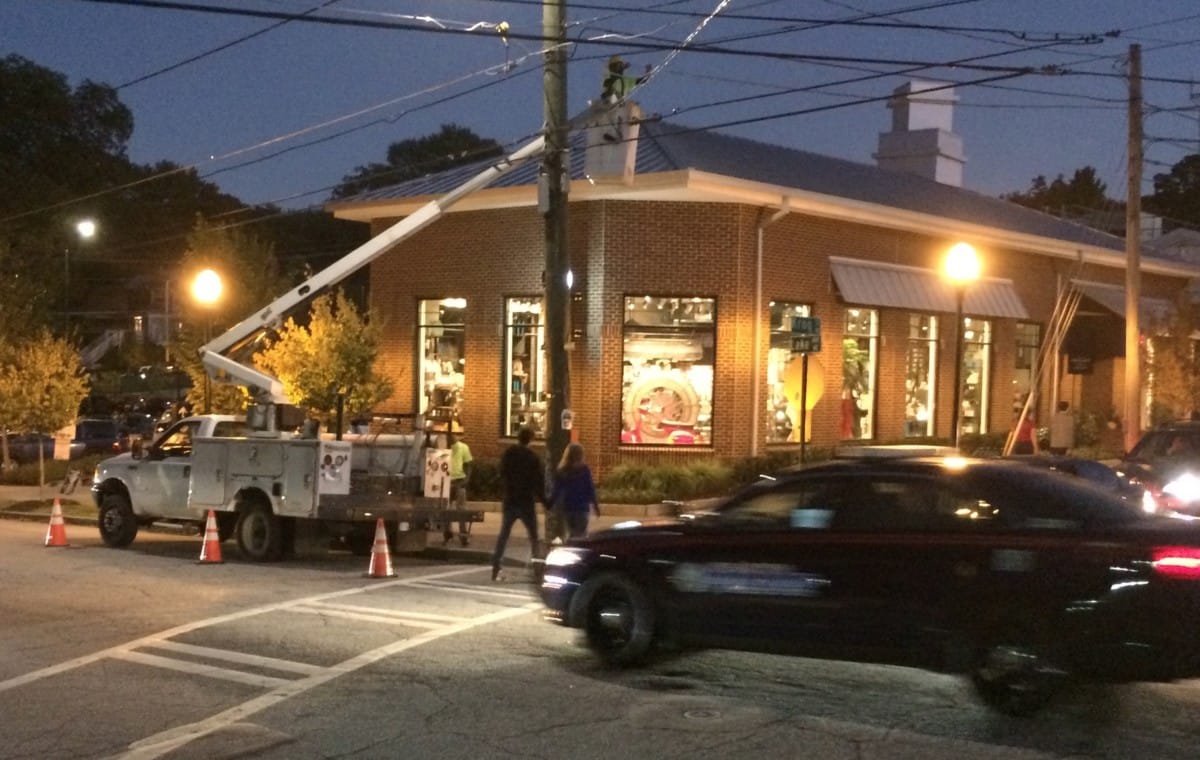 Two traffic intersections in the bustling neighborhoods of Inman Park and East Atlanta are on the brink of getting enhanced traffic control. The plans are slated for discussion Wednesday at the Atlanta City Council’s Transportation Committee. 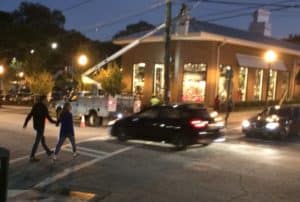 The black vehicle is about to get blue-lighted by an Atlanta police cruiser on Tuesday evening, seconds after driving through a cross walk on Irwin Street in front of two pedestrians walking toward Krog Street Market. Credit: David Pendered

In addition to these improvements, the Transportation Committee is slated to hear a proposal from the state to install streetlights along Peachtree Road in Buckhead. Terms call for GDOT to install lights from Shadowlawn Avenue to Roxboro Road and for the city to maintain and operate the lights. The legislation does not mention the architectural style of the lights.

The two intersections represent the type of challenges that accompany the extent of infill development that’s occurred in the past decade in the two neighborhoods.

As residents move into the neighborhoods, the intersections become danger zones where vehicles, pedestrians and bicyclists interact. Here’s how the city’s transportation managers plan to improve safety in the two areas.

Inman Park: Krog and Irwin Streets, and Lake Avenue – the intersection near the Krog Street Market and the Atlanta BeltLine’s Eastside Trail. The measure was sponsored by Councilmember Kwanza Hall. 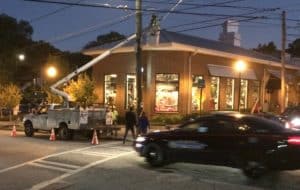 The pending legislation calls an all-way stop at an intersection that serves a plethora of vehicles, cyclists and pedestrians.

On any given evening, crowds of pedestrians cross Irwin Street on their way to and from the Krog Street Market. At the same time, commuters traverse Irwin Street from their workplaces in and near Downtown Atlanta to homes located west of the intersection.

On any given day, crowds of pedestrians and cyclists traverse the intersection on their way to an from the Eastside Trail, according to the legislation.

According to the legislation: 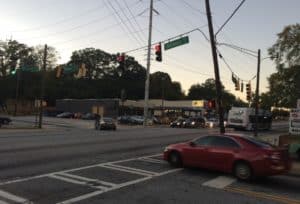 Plans call for Glenwood Avenue to be realigned to eliminate the dogleg across Moreland Avenue the red vehicle is about to execute in order to follow the black vehicle in proceeding west along Glenwood Avenue. Credit: David Pendered

East Atlanta: Glenwood and Moreland avenues – the intersection where the First Iconium Baptist Church is located. The measure was co-sponsored by councilmembers Carla Smith and Natalyn Archibong.

The pending legislation presents the improvement as an upgrade of the streetlights at the intersection of Moreland and Glenwood avenues. The paper describes a project in which the Georgia Department of Transportation will be installing streetscape enhancements and installation of roadway lights. The city agrees to maintain and operate the lights.

The project is more far-reaching than outlined in the legislation.

The plan is to retool the intersection in order to align Glenwood Avenue and eliminate a dogleg that now exists. This portrayal can be found in papers that support the legislation. 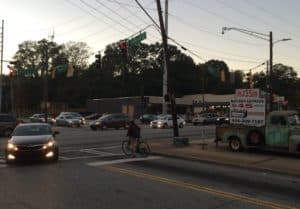 Bicyclists are in particular danger because drivers may be distracted by the multiple lanes of travel through the intersection of Moreland and Glenwood avenues. Credit: David Pendered

This is how the white paper that’s attached to the legislation describes the scope of work: 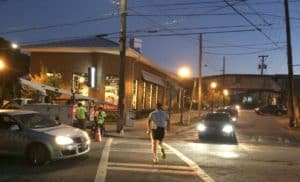 Before the jogger crossed Irwin Street near the Krog Street Market, he made a visual connection with the driver to his left, in the white vehicle. He hopes the driver seeking to turn right onto Irwin Street is watching him as well as traffic approaching from the driver’s left. Credit: David Pendered