U.S. Secretary of Transportation Ray LaHood likes his job, and he likes Atlanta.

After being introduced by Atlanta Mayor Kasim Reed, LaHood told the crowd that Reed was one of his favorite mayors.

“He and I have become very dear friends, and we have worked on many different projects,” LaHood said. “I have never really met as dedicated a mayor as here in Atlanta. Kasim, you and I have been great partners.” 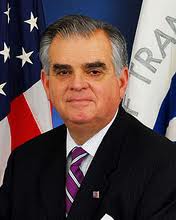 LaHood then went on to say that one of his treasured memories was during the ground-breaking of the Atlanta Streetcar, which he said would run along “some of the most historic streets in Atlanta.”

An unusual relationship has developed between Reed and LaHood. Reed, one of the most influential Democrats in Georgia, has helped open doors for state Republican leaders to meet with members of President Barack Obama’s administration. The strange irony is that LaHood actually is a Republican who is serving in a Democratic administration.

During the question-and-answer portion of the opening day program, LaHood was asked whether he would be staying as transportation secretary if Obama was re-elected.

“I have considered this as a privilege of a lifetime to have this job,” LaHood said, adding that he also enjoyed being in Congress, but it was hard to get things done. “In this job, I can get things done. We have done a lot. After the election, I’m going to sit down with the president and figure it out and see where that takes us. And if the other fellow wins, I’ll probably be walking out the door even though I’m a Republican, and proud of it.”

Later in the day, Reed was asked about LaHood’s future with the administration. “He’s going to stay,” Reed said without hesitation. “He’s a good guy.”

At a press conference announcing that Air Cargo Germany would start flying into Hartsfield-Jackson International Airport on Oct. 11, Reed said that LaHood has been instrumental in getting the deepening of the Port of Savannah listed on a fast-track for future federal funding.

“The secretary has reiterated his support for that deepening, and he did so again today,” Reed said. “It’s going to be deepened. Once we deepen the Port of Savannah, we are going to challenge everybody in the logistics space.”

Reed went on to say that having the mayor of the City of Atlanta and the Metro Atlanta Chamber working to help deepen the Savannah Port “goes a long way in tearing down the notion of the two Georgias.”

And once the port is deepened, Reed said the Port of Savannah will continue to be the “fastest growing port” in the Southeast, and that will contribute to the expansion of air cargo out of Hartsfield-Jackson. Already, Hartsfield-Jackson is the 10th busiest air cargo hub in the United States.

Louis Miller, general manager of Atlanta’s airport, said that with Air Cargo Germany flying to Atlanta — only one of the top 10 air cargo companies is not serving Hartsfield-Jackson — Emirates SkyCargo.

Emirates had a prime exhibitor’s position on the convention floor — right near the entrance.

The airport has been in discussions with Emirates for five to six years. “They always say nice things,” said Miller, adding that representatives of the Emirates have told airport officials that they want to fly to Atlanta when the economy improves.

Speaking of the economy, during an industry panel discussion, Delta Air Lines CEO Richard Anderson was more upbeat than his colleagues.

Anderson’s view of the economy is “generally positive,” saying that “corporate profits are really solid, cash balances are at record levels,” and the U.S. dollar is still a favorite currency in the world.

“I’m a bit more optimistic with the proviso that Europe is going to be a struggle,” Anderson said. “Eventually the euro needs to be a common currency with a central bank. Mexico is doing quite, quite well right now. And Brazil has good government with good infrastructure.”

Anderson was asked what impact the presidential election could have on the airline industry.

His response was as follows: “Our company has been around since 1926 so we’ve been through many presidential elections.”

Previous Article
Public education in Georgia — it’s time for a bold and different approach
Next Article
Why not build dense residential at Walmart site in Buckhead, veteran development lawyer wonders