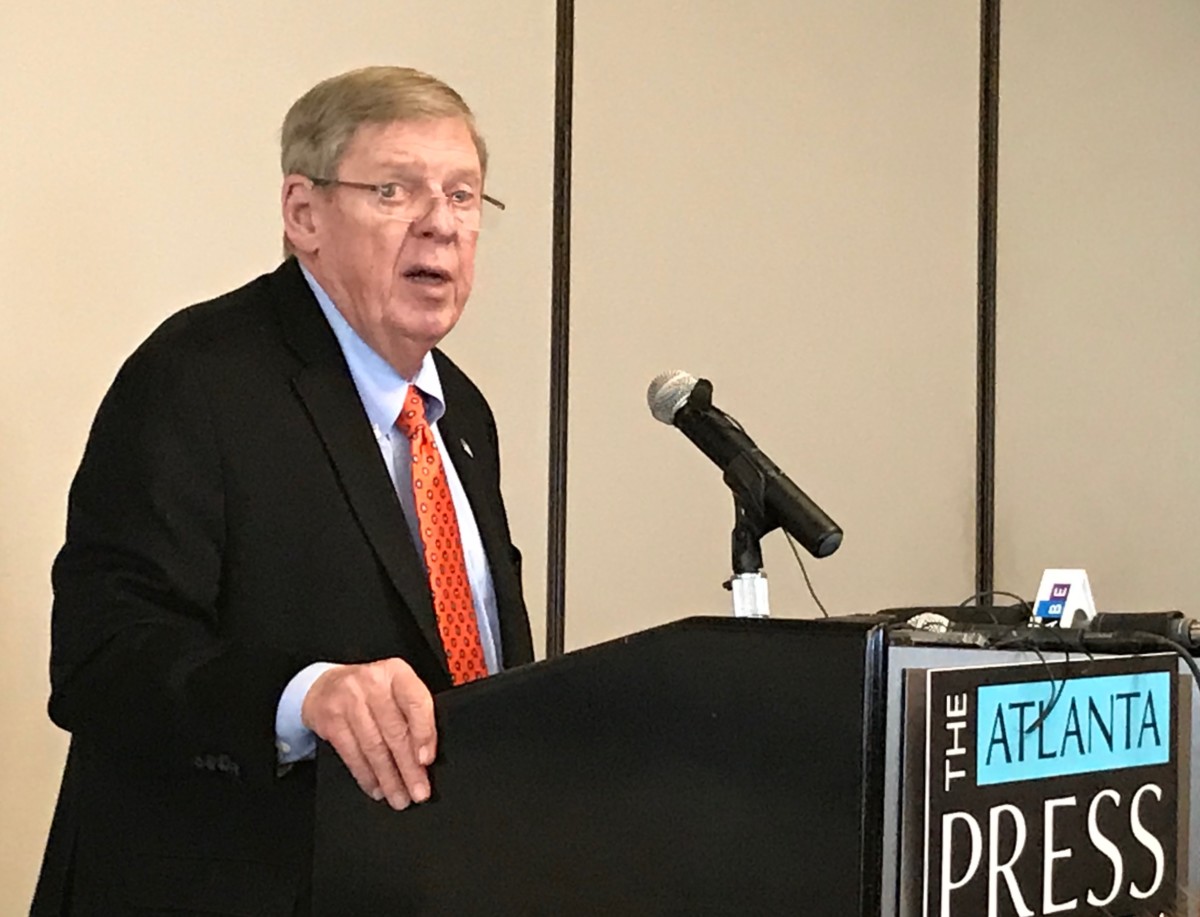 Isakson was the luncheon speaker for the Atlanta Press Club’s newsmaker series on Tuesday when he addressed a variety of topics – from school shootings, mental illness, immigration and the political climate in Washington, D.C.

When he was asked whether he planned to run for re-election, Isakson quickly answered: “Of course.” 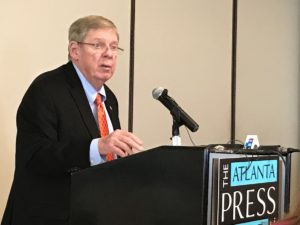 In fact, the senator’s staff said he filed his paper work last year so that he could raise funds for his next campaign. Isakson won his third term to the U.S. Senate in 2016, about a year after he announced that he had been diagnosed with Parkinson’s disease.

There has been speculation in political circles that Isakson, 73, would not run for re-election.

But during his talk to the Atlanta Press Club, Isakson showed no signs of stepping away from public service. The only evidence of Isakson’s disease was that he is now walking with a cane.

Isakson opened up his talk by addressing the killing of 17 people on Valentine’s Day at Marjory Stoneman Douglas High School in Parkland, Fla.

“We have to do everything we can within our powers to make sure it never happens again,” said Isakson, who focused on the need for mental health services and early identification efforts to prevent another mass shooting.

Isakson said that shortly after he was elected to the U.S. Congress in a special election in 1999, the Columbine High School massacre took place in Colorado. After 9/11 in 2001, Isakson said the nation “hardened our targets” in airports by providing screening devices.

“ Our schools should not be out of that perspective,” Isakson said. “No one wants to have armed guards or the military protecting our schools.”

But better safeguards are needed to protect students in schools. He said the nation must prioritize mental health and mental health accessibility – especially for veterans.

“Too many veterans commit suicide every day,” he said.

During the question and answer period, Isakson was asked about gun control. He said that the first thing the country should do is enforce the laws that are on the books.

He stopped short of supporting any other specific measures, such as banning assault rifles or implementing stricter background checks.

“We tried to pass a good bill, and we failed,” Isakson said of the immigration reform proposal supported by then President George W. Bush in 2006. Six years later, another attempt failed. “And last week, it failed again. This is not a ‘three strikes and you’re out’ issue.” 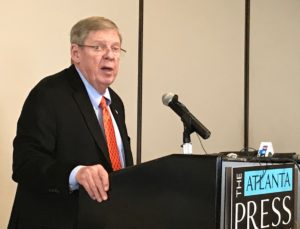 Currently, the country is approaching full employment, which means many jobs are not being filled. We need immigrants to support our companies and our economy, Isakson said.

“Immigration should always be calibrated with jobs,” Isakson said. “It’s a supply and demand issue.”

The 2018 legislation that Isakson co-sponsored with about 30 other senators garnered 54 votes, more than any other immigration proposal, but still short of the 60 needed to move it forward. Isakson thought there was an opportunity to pass immigration reform because

Republicans were willing to accept a path the citizenship for “Dreamers” (also called DACA recipients), and Democrats were willing to allocate $25 billion to build a wall. President Donald Trump had said he would sign a bipartisan bill, if it were to reach his desk.

“Doing nothing is not acceptable,” said Isakson, who is hopeful Congress will reconsider a bipartisan bill. “We know now what we are willing to agree to.”

Isakson also made clear that the path citizenship would be a 12-year process before someone could apply to become a citizen, and during that period.

“It is not a giveaway,” the senator said. “It’s time we solve the immigration problem.”