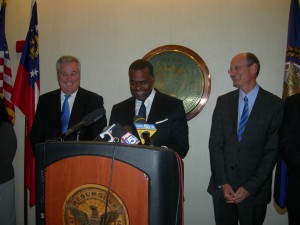 Proclaiming that “today marks another milestone” for Atlanta, Mayor Kasim Reed said Wednesday during a press briefing when he announced that the city had entered into an agreement to sell Underground Atlanta to WRS Inc., a real estate investment company based in South Carolina.

WRS will pay the city $25.75 million for 12 acres of downtown real estate, which the city will use to pay off the remaining debt on the property.

It also will cover the costs of buying out the 70-year sublease that existed on the property – a deal the city completed in March. That gave the city the flexibility to put the Underground Atlanta property out for bid as part of the mayor’s strategy to rid the city of unneeded real estate. The mayor said the sale will save the city about $8 million a year.

But Reed said the Underground sale was much more significant than just a land transaction.

“It is also a great deal for the community surrounding Underground Atlanta,” Reed said. “It will be a catalyst for the revitalization of this corridor.”

The new development will be “a place where people can live and shop everyday instead of a place where they will visit once in a while,” Reed added.

The mayor gave much of the credit for the deal to A.J. Robinson, president of Central Atlanta Progress who has been touting the benefits of downtown for decades.

“This is a big day for the city,” Robinson said. “This is a bright new horizon our city.”

With a substantial investment in Underground, Robinson said that now “we have a great opportunity” that the state, MARTA and other entities also will invest in properties that surround Underground Atlanta

T. Scott Smith, president and CEO of WRS Inc., said he was intrigued by the built in market that already exists for Underground. The company is still undergoing market studies to determine how much residential the property can handle, but he plans to take advantage of the trends of people moving back to the center city and wanting to live close to transit and being part of a walkable community.

“We don’t believe there’s a better location,” Smith said. “You can go in every major city. People want to be back downtown.”

Smith added that they would like to start construction in mid-2016 and complete the development in three to five years.

WRS is primarily a retail developer – developing 30 retail anchored shopping centers with more than seven million square feet of space since 2001. Smith said that he already is talking to multi-family developers about building the residential towers on the property.

The plan is for WRS to leave the historic Underground part of the development pretty much as it is today but to bring in new retail and restaurants – especially to fill up the vacant spaces. The upper level – what is at the street – is what will be redeveloped with high density residential on the upper floors with retail at street level.

Previous Article
Atlanta could clear $10 million from sale of Underground Atlanta
Next Article
Underground: How an outsider hopes to succeed where others have failed