Underground: How an outsider hopes to succeed where others have failed

By Maria Saporta
Published in the Atlanta Business Chronicle on Dec. 19, 2014

The question people keep asking T. Scott Smith is why would he tackle the redevelopment of Underground Atlanta.

Smith, a retail developer from Mount Pleasant, S.C., outside of Charleston, has entered into an agreement with the City of Atlanta to buy a 12-acre site encompassing Underground Atlanta for $25.75 million.

It is a redevelopment challenge that has been shunned by Atlanta’s most experienced developers. Even Smith has been surprised by the number of people in Atlanta who have questioned him on why he would be willing to take on such a risky project.

After all, Underground Atlanta is now in its third incarnation, and it isn’t prospering. The first Underground opened in 1969 and closed in 1982. A second version by Rouse Co. opened in 1989, but Rouse pulled out in 1996. Atlanta developer Dan O’Leary then stepped in for a third try in 1999. The city bought him out earlier this year.

But for Smith, CEO of WRS Inc., Underground Atlanta presents a wonderful opportunity. And he is somewhat surprised that most in the real estate community don’t see what he sees. 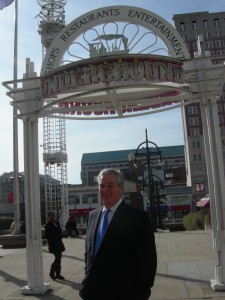 T. Scott Smith in front of the main entrance to Underground Atlanta across from the Five Points MARTA station (Photos: Maria Saporta)

“I can’t tell you how excited we are to develop this piece of property,” Smith said at the press briefing announcing the deal on Dec. 17. “We are going to be able to do something great for our company and also to do something fantastic and great for Atlanta.”

A.J. Robinson, president of Central Atlanta Progress, said that sometimes it takes someone from outside the city to see the value in what we have right in front of us. “Here is an outside person who is well-qualified and capable and enthusiastic to tackle an incredible historic and important landmark in Atlanta,” Robinson said. “People who are downtown every day have very low expectations about Underground and downtown. Kudos to someone new who saw the potential.”

Robinson said that potential is backed by facts – the number of workers, students and visitors in the area. They provide an opportunity to create a whole new market place for the city and downtown.

“Nobody local was interested in the project,” Robinson said. “People didn’t know how to do it. Sometimes it’s easier to go do a project somewhere else.”

In an interview at Underground, Smith attributed the disconnect to the history of the project and how times had changed. Today the enthusiasm around the country is in the center of cities.

And, Smith said, what is more central than Atlanta’s zero mile post – which sits at Underground Atlanta? It’s where all the rail lines, major roadways and MARTA lines intersect.

“Some of the best opportunities we have ever had have been in properties that have been in a down cycle,” said Smith, putting Underground in that group with its 45 percent vacancy rate. “It is taking its licks. But I’m really surprised that with no anchor tenant and no reason for people to come here day-to-day, over 100,000 square feet are leased right now, which tells me it certainly has potential.”

A. J. Robinson, president of Central Atlanta Progress, speaks with T. Scott Smith, who has a contract to buy Underground Atlanta, at the downtown property

Smith has grand plans for Underground Atlanta. He plans to keep the portions that are Underground virtually the same – dedicated to retail and restaurants and perhaps other mixed-uses.

Most of the change will occur on the upper level – what is now the street level and where most of the buildings are new low-rise construction. The plan is to build three residential towers – in partnership with a multi-family developer – with retail at street level.

“Once we start this development, you will see many other developments started by other people in the area,” Smith said. “That’s not unusual at all with our other developments. To fix Underground, we feel we need to put people above ground and give people a reason to come more often than they do. We want to turn this into a community.”

“There’s a huge hole in this market for a grocery store,” Smith said, and he expects to put one at street level to serve the growing residential market downtown. He also believes that Underground will be able to serve a mix of retail that caters to both tourists and residents – including a variety of restaurants and stores. “Shopping-wise, we think we can be all things to all people,” Smith said.

And when asked how long he expects it would take to develop, Smith said: “I would hope it would be no longer than five years and hopefully it would be three to four years.”

Smith expects the sale to close in mid 2015, and he would like construction to start in mid-2016.

When WRS and its development partners make such a significant investment into Underground, Smith said it should have a ripple effect on the surrounding areas. “There are a lot of people who have a stake in downtown Atlanta, and we look forward to working with them – to not only have this project be successful, but to improve the sustainability of their properties,” said Smith, who is aware that Underground has experienced its ups and downs. “We want to do something that will sustain the economic vitality of this area.”

The major redevelopment will occur at street level, and Smith said he would be studying which buildings had historic designations. But his understanding was that with the exception of a couple of taller buildings, most of it is newer construction.

Meanwhile, Smith was planning to meet with Georgia State University President Mark Becker, and Mayor Kasim Reed said he would be visiting with MARTA General Manager Keith Parker to discuss how they could be supportive of the Underground development.

For Smith, the Underground Atlanta development would “be the highest profile project we will have ever developed.” But it will not necessarily be the largest – depending on how it will be divided up with the multifamily partners.

One of the biggest projects WRS is developing is the Horizon District in South Carolina, an urban research district that will contain more than 2.5 million square feet of mixed-use space with street-level retail, restaurant, office space and workforce housing. WRS also has developed a number of retail-anchored projects for nationally-known corporations including Belk, Wal-Mart, Staples, Kohl’s and Dick’s Sporting Goods.

Asked if he would be putting a Wal-Mart in Underground, Smith said he expected that there would be higher-end retail in the development.

Although Smith, 54, has not developed other projects in Atlanta, his associate Kevin Rogers used to live in the city and urged him to consider doing a project in downtown Atlanta. They began exploring opportunities in downtown Atlanta two-and-a-half years ago.

“Underground is an iconic piece of property,” said Smith, a native of Tennessee who has lived in South Carolina for the last 25 years. “I’ve always been interested in Atlanta. It is the city of the South.”