Chances to rehabilitate existing housing would improve through better integration of resources. (Photo by David Pendered)

The need: A place to call home for all of Atlanta’s people
The Purpose: Understanding what it takes to fulfill that need 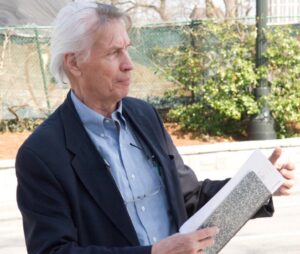 Over the last couple of years, housing costs have shot up in Atlanta. Already rising before, it is now difficult for households earning below median incomes to find decent housing in a stable neighborhood. Rentals are outpacing homeowners in the market, spawning more build-to-rent activity. People’s ability to own and build wealth is declining, more for Black people than white. Not having a reliable place to live magnifies a number of associated lacks, for health, for education, for making a living, and for a hopeful future. The stresses on low wealth families in this plight are severe. In short, the problem has reached a crisis stage. Most other cities across the country are facing similar crises

City politicians and other leaders have increasingly prioritized the issue of housing affordability and committed themselves to do something about it. They ran a zoning proposal up the flagpole, but it was fatally flawed and failed. (See Dobbins: Atlanta’s proposal offers false hopes for housing affordability, breaks from ‘Atlanta City Design’) Meanwhile, housing costs continue to rise, and the gap between those who have affordable, safe housing and those who don’t, continues to widen.

From the November 2021 election, the city has a substantially new leadership team – mayor, council president, and several new councilmembers – for whom availability of affordable housing is high in their priorities. These changes create opportunities for change.

The city is enjoying robust new investment across most sectors. Major commitments of public funding as well as the granting of various entitlements has induced or supported much of this investment. The city has the opportunity now to commit to a more equitable use of these resources to prioritize affordable housing and its infrastructure to better address its people’s needs.

The problem, however, is wickedly complex, with many moving parts, all interacting with each other in ways difficult to predict. I have administered housing, planning, and development agencies, as well as taught the subject. I put forward the following framework aimed at deepening and broadening understanding of the problem and inviting consideration of what can be done about it.

For the sections that follow, more detail about ideas and possible actions can be found in a longer version of this analysis. (See Dobbins: Getting affordable housing right – a beige paper*)

All Hands on Deck 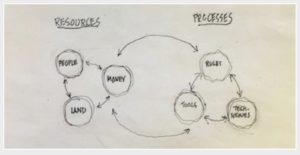 Resources and processes must be better integrated to increase the supply of affordable housing. (Freehand drawing by Mike Dobbins)

To begin with it is important to understand the dynamics between the resources and processes that bear on the problem. The people, the land, and the money embody the resources it will take. Shifting priorities for use of existing resources is essential. The rules, the tools, and the techniques embody the processes necessary to implement effective strategies. Likewise, realigning the delivery processes toward this focus must happen. Think of these as two interacting triads that in turn interact with each other. The adjacent diagram portrays these relationships.

People, Land, and Money: The Resources

People
Atlanta benefits from and should build on the range and commitment of affordable housing-focused organizations and individuals already in place. One way to group them is:

Community development corporations from the neighborhood to city-wide.

Their shared scope in this work is to meet the shelter needs of the neediest, from homelessness to severely and moderately cost-burdened households. Many of these are doing good work. Collectively, they embody the types of resources necessary to create comprehensive and unified strategies that can be effective. But there’s never enough: Not enough land, not enough money, and not enough collaboration. There’s the rub: How can we get enough? How to pool their knowledge, skills, and resources to augment the resources necessary to get enough to implement a coordinated strategy?

Perhaps most directly affecting housing affordability is land cost, related to land location, land availability, and land quality. Typically, variability of land cost accounts for disparities of housing cost more than other factors. Now, private equity is flowing into the city. Under these circumstances, no neighborhood is safe from destabilization through cost escalation and the inevitable hike in predatory scams and property taxes. Lower income neighborhoods, where land is cheaper, are more vulnerable. Without a serious and significant move to bring land under the control of public and non-profit entities, private equity will hamstring the goal of affordability and of neighborhood stability. The city’s existing policies, aimed at conservation and rehabilitation of existing properties, underscore this need.

On a par with land as a factor that determines the capability and the effectiveness of affordable housing initiatives is money. Many elected and civic leaders, academics, activists, and others have recognized that there is enough money in the national economy to achieve a fully housed, fed, healthy, educated, and stable America. It’s a question of how these resources are distributed, how to make the changes necessary to move in that direction, and having the willpower to persist.

As an example, a small step would be coordination and synchronization of funding sources that support existing affordable housing developers, public and non-profit. Easier said than done. Presently, the doorways to these funds are many and profoundly complicated. Virtually no developer building affordable housing can go to a single source. Multiple sources are required to build the capital stack it takes to amass the equity necessary to proceed. These sources, federal, state, local, private as well as philanthropic, each have their own rules, their own application process, and their own timelines. Virtually none is willing or able to make their commitments over the length of time it takes to get a development from start to finish.

Further, so paltry are the funds in relation to the need that competing for them is vigorous, a shame since the competitors are mostly trying to do the right thing. Finally, purely the amount of time it takes to get funding is huge, time that ought to be spent building instead of begging. Thus, the portals to funding must be coordinated.
Reflecting the will to persist, steps to improve funding practices have begun. House ATL, an umbrella organization formed by the affordable housing community, has supported the establishment of a “funders collective” managed by Enterprise Community Partners. This initiative responds to the insanity of disjointed current practices. The kind of coordinative structure that Enterprise is putting together could be a model for how to deal with other aspects of the tough nut that must be cracked to deliver affordable housing.

Rules, Tools, and Techniques: The Processes

Like the resources triad, the process triad groups rules, tools, and techniques into an Interacting framework, where the three interact with each other continuously. Change a rule from a barrier into a tool. Find a new technology, adjust the rules to use the tool. And the triad as a whole may similarly interact unpredictably with the resources triad. For example, if new investment were to become available from Build Back Better for modest multifamily rehab, it may trigger the need for rules changes, like building codes, into facilitating tools and techniques for doing the work.

There are and always will be rules. In the current discussion about housing development, there are rules that govern private sector investment practices and rules that govern public sector policy and action. Typically, the existing rules reflect values or political power as established over successive points in time and so may fall out-of-date. In the private sector, for example, the rules governing lenders’ investment decisions used to separate housing, retail, and office sectors. The industry has been slow in recognizing emerging market norms where mixed-use projects have become the vogue, thus the need to reshape the rules.

Correspondingly, in the public sector, many rules stand in the way of moving toward a more just society, as epitomized by the housing crisis. In the case of zoning as one example, there was a long period where separating uses was the norm. Like with lenders’ rules, the now discredited notion that mixing uses was a bad thing has given way to promoting mixed use, walkable, denser centers as a more desirable goal. Over the last twenty-five or so years, under the flag of quality of life improvements, the city has repeatedly amended its Comprehensive Development Plan, its zoning ordinance, and street design standards to permit and encourage these evolving models. In short, the rules have turned into tools.

Yet again to address our affordable housing crisis, change is urgently called for. Rules like those governing land planning and development that have been tools for discriminatory, inequitable, and exclusionary practices must change. As the rules change, so too must the tools become just and fair mandates. These should spread across the spectrum housing need, including housing types and tenancy types that so bar people from having a safe and suitable roof over their heads.

Finally, the third sphere in the how-to-get-it-done triad, what are techniques that may move the ball forward? These begin with who’s in the room, not just in the room, but sitting at the table. The processes of approval and implementation of change include politics, technical obstacles, aversion to change, and experimentation. If the goal is to improve the lot of those most victimized by the lack of suitable shelter, then ‘those people’ and their experiences need to be at the table. Here lies both the range and depths of lived experience that can produce a sounding board to evaluate what works and what doesn’t. An inclusive vision of how it could be then emerges, guides the information necessary to test it, leading to actions taken incrementally to confirm or adjust the direction.

Atlanta is fortunate in having so many committed organizations doing good work across the spectrum from homeless people to cost-burdened families. These are strengths to build on, all aimed at both affordable and available habitations in compatible and complementary neighborhood environments.

So, build on strengths! Across the sectors identified above, Atlanta has a lot going for it. Many of these entities are already moving in positive directions. I’ve sought to identify obstacles to doing better and some ideas on who and how to do so; they’re based on experiences, observations and research, which means open to question and suggestions by others. That would be a good thing, and hopefully precipitate concrete progress.

The city can overcome its housing affordability and adequacy crisis. It can break down persistent barriers and build diverse equitable and inclusive neighborhoods that honor differing community-held values. Of course, moving ahead is complicated; but the underlying obstacles are complicated already. Also, it will take time, years, to move toward acceptable housing for all. What I want to emphasize is that to do so requires a multi-pronged approach: interactions among the people, land, and money that actually result in housing being built on the ground on the one hand, and on the other interactions among the rules, tools, and techniques that at the end of the day guide and frame that outcome. The new city administration, the quite new school board administration, promising signals from Atlanta Housing, and the new emphases coming out of the Community Foundation all show great promise in these otherwise tormenting times.

Mike Dobbins is co-author, with urban planners Leon Eplan and H. Randall Roark, of ‘Atlanta’s Olympic Resurgence: How the 1996 Games Revived a Struggling City,’ released May 3, 2021 by Arcadia Publishing. The book explores Atlanta’s management of $3 billion in Olympics-related construction that had to be completed on time.

Previous Article
Getting affordable housing right – a beige paper*
Next Article
The Parks We Need Now!