Unlike New York, Atlanta’s mayoral inauguration expected to be mild

Atlanta has a history of low-key mayoral inaugurations. It’s just not the Atlanta way for politicians to swing for the fences at these rites of passage. That wasn’t the case in New York on Jan. 1, when a pastor speaking from the inaugural podium referred to “the plantation called New York.”

Likewise, Gov. Nathan Deal and other politicians may offer new insights but probably won’t stir the hornet’s nest in speeches at the Eggs and Issues breakfast to be hosted Jan. 15 by the Georgia Chamber of Commerce.

Reed started his inauguration over the weekend. On Saturday, he and re-elected Councilman Ivory Lee Young Jr. led a clean-up of Washington Park, a significant city facility located along the Atlanta BeltLine west of the future Falcons stadium. On Sunday, Reed led an event at Cascade United Methodist Church – the Inaugural Interfaith Worship Service.

Following Monday’s swearing in ceremony, Reed has scheduled an event called the Citizens Reception, at Atlanta City Hall. The event is open to the public and begins at 5 p.m. 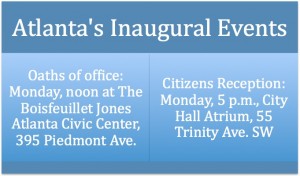 Atlanta’s inaugural events will be broadcast live on the city’s Channel 26 and on the city’s website, in addition to these live events.

The next major event on the local political calendar is the two-day program hosted by the Georgia Chamber.

The annual dinner meeting, on Jan. 14, is to be highlighted by a presentation by former U.S. Commerce Secretary Carlos Gutierrez. He served from 2005 to 2009 under President George W. Bush. Gutierrez is a former CEO/chairman of Kellogg Co. who now speaks on technology skills in the workplace, immigration, and intellectual property rights protection.

At the Eggs and Issues Breakfast, the highlights of the upcoming legislation session are to be outlined by Deal, Lt. Gov. Casey Cagle, and House Speaker David Rawlston. They are not expected to unveil sweeping policy reforms, given that attention has already shifted from governing to campaigning for this year’s primary and general elections.

On the contrary, New York City’s inauguration of Mayor Bill de Blasio was anything but mild mannered. De Blasio is the first liberal to be elected in 20 years. While he soft-peddled a message about social equity, other speakers hammered the point as well as outgoing Mayor Michael Bloomberg. 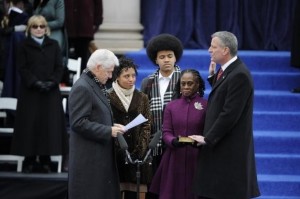 De Blasio called social inequality a “quiet crisis” and went on to say:

The Times news story went on to say:

According to a report in the New York Daily News, critics of Bloomberg included Harry Bellafonte, the 86-year-old singer and human rights advocate, and the city’s 18-year-old youth poet laureate:

Clinton said of Bloomberg, according to politicker.com: “He leaves the city stronger and healthier than he found it…. So I’m grateful to both mayors: Mayor Bloomberg for his years of service and for the legacy he will leave, and to Mayor de Blasio for his good and caring hands.”