The state’s tollway authority is negotiating the planned relocation of Amtrak’s train station from Buckhead to Atlantic Station, the mini city on the western edge of Midtown.

The station’s proposed relocation was to be the first item discussed at a meeting convened today by Emory McClinton, a member of the state transportation board. The matter never came up.

“Gena [Evans] is negotiating it. That ‘s all I can say,” McClinton said after the meeting. 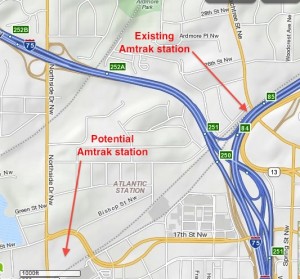 Evans is executive director of the State Road and Tollway Authority. The agency is best known for collecting tolls along Ga. 400.

Gov. Nathan Deal chairs the SRTA board. State law provides SRTA with broad powers, including the authority to:

The SRTA board meets on an “as needed basis” with notices published on its web site and the Fulton County Daily Record, according to SRTA’s web site.

SRTA is comprised of five members who have great influence, by virtue of their position or political connections:

Telephone calls and emails seeking more information from SRTA and Amtrak were not immediately returned.

In 2002, SRTA spent $10.4 million in tollway collections to buy 6.8 acres on the west side of Atlantic Station. At the time, the land was intended to be a landing pad for a proposed transit line from Cobb County.

Earlier this year, the site was earmarked for Amtrak’s new station. The state requested federal funding to help build a facility, but did not receive the money.

Georgia had applied for $22.5 million in federal funds to help build a facility with a pricetag of $38.9 million. The project was expected to take 18 months to build and open as early as July 2012, according to the state’s application titled: “Part II Statement of Work.”

Here are some interesting tidbits from the application:

The proposed site is adjacent to the IKEA building and the Norfolk Southern railroad tracks.

Travelers could reach the proposed station by private vehicle, MARTA or the Atlantic Station shuttle. Any of the methods would be a measurable improvement over the access to the existing Amtrak station, located at the corner of Peachtree and Deering roads.

Private vehicles would exit into Atlantic Station from the Downtown Connector or from Northside Drive. MARTA has multiple routes in the area. The Atlantic Station shuttle connects with MARTA’s Arts Center Station.

The existing station is accessible by MARTA bus and vehicles that arrive from Peachtree or Deering roads.