Slowly but surely, the National Center for Civil and Human Rights is raising the money it needs to break ground in downtown Atlanta.

Doug Shipman, executive director of the center, announced the latest financial gift at the Atlanta Rotary Club Monday — a $500,000 grant from the UPS Foundation. 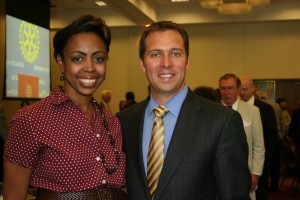 Ronna Branch, public relations supervisor at the UPS Foundation, and Doug Shipman, executive director of the National Center for Civil and Human Rights, at the Atlanta Rotary Club Monday (special)

That brings the total money that’s been raised for the center to about $70 million.

“We are building this without debt,” he said. “We are not breaking ground until we have enough money.”

Specifically, Shipman said the center won’t break ground until it has raised at least 80 percent of its capital campaign budget. That means the center needs to raise another $20 million. Once the money has been raised, it will take two years to build. Also, the center is raising an endowment to help cover its operating expenses.

The goal has been to break ground by the end of the year so it could open in 2012. The site of the center is on the same block as the Georgia Aquarium and the World of Coke.

Shipman said the center hopes to gain fundraising momentum as the nation emerges from the recession. “It’s imperative we build it now,” said Shipman, because Atlanta is competing with other cities to attract tourism and convention dollars.

Also, many of the beacons in the civil rights movement are advanced in age, and there’s a limited amount of time to be able to capture their stories and perspectives.

As Shipman sees it, the center will give Atlanta an opportunity to define its legacy as the capital of civil and human rights.

The center also can become a place to help the country deal with contentious issues brought on partly because of its changing demographic profile.

The population in the United States is not only aging. It’s also becoming more diverse. Both trends are reasons to build the center, Shipman said.

“Now more Americans alive today were born after 1970 than were born before,” Shipman said. “The interesting thing about that group is that they have no idea what the 60s is all about.”

At the same time, Shipman said the country is moving from a white majority population to a white plurality with an increasingly diverse population.

“Atlanta has a unique history in which to inspire us and others on this changing demographic,” Shipman said.

Atlanta is known as a city that has been able to practice non-violence while working across religious and racial lines, Shipman said. “Most importantly, the business community has not only been a funder for this change, but a catalyst for this change.”

Shipman said the center will not be a museum but a living institution that will focus on current civil and human rights issues in the world. The goal is for the center to become a comfortable place where people with different opinions and perspectives can have civil discourse.

The center also is going outside of Atlanta to try to raise money. So far, the state of Georgia has not set aside any money to help build the center. But the state did approve $10 million in bonds to build the College Football Hall of Fame.

“In some ways, it’s an easier sell (around the country) than it is here,” Shipman said about the center’s fundraising efforts. “At the end of this, it has to have national support.”

As Shipman said the National Center for Civil and Human Rights will help define Atlanta to the rest of the world.

“It is the best of what we are, and it is how we can help shape our own future,” Shipman said.