Keep B.J. Novak weird. Or at least as weird as he is in “Vengeance,” a culture-clash comedy-thriller he wrote, directed and stars in.

Best-known for his similar multi-tasking on “The Office,” Novak here plays Ben Manalowitz, a stereotypical party-hard New Yorker who believes if he knows what somebody’s parents do for a living, he’s been dating them for too long. 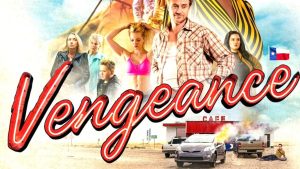 A movie poster of the movie “Vengeance”

That partly explains why he’s ended up in rural Texas, at the funeral of a murdered woman he barely remembers. Worse, he’s the Designated Bereaved Boyfriend.

As such, he’s recruited by the family to find out what happened to her, i.e., help find her killer. As one character explains, in Texas, they don’t dial 911 (Full disclosure: I used to have a t-shirt like that about Georgia).

Involvement in what he considers a bad Liam Neeson movie isn’t on his agenda until – Eureka moment! – Ben realizes it could make a great podcast (Did I mention he’s a writer for the New Yorker?) After all, he has full access to a willing coterie of family and friends who want to help. To paraphrase Nora Ephron, everyone is copy.

“Everyone” includes a host of Texas types who aren’t as easily dismissed as Ben initially believes. Yes, it’s a fish-out-of-water tale with an expertly hooked fish and unexpectedly dark (but still comic) waters. A scene from “Vengeance”

True, the movie deals in expected red state/blue state frictions (and fictions), but they’re doled out in such a fresh and funny manner that we’re easily caught up. Simply consider this exchange between Novak and Boyd Holbrook as the victim’s older brother. Talking about his Texas home, Holbrook says it’s “the most god-forsaken wretched place on earth, and I’d never leave.”

To which Ben replies, “That’s how I feel about Twitter.”

“Vengeance” is available on demand.