An interfaith prayer vigil on Monday is slated to begin an hour before Clayton County’s board of commissioners is to convene to consider putting a sales tax referendum for transportation on the November ballot. 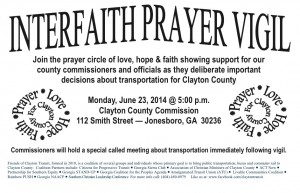 Click on the image for a larger version. Credit: Friends of Clayton Transit

The November time frame for the transit vote is of the essence for its advocates. If not called this year, the proposed transit tax will run into the planned 2015 referendum to extend Clayton’s existing special purpose local option sales tax (SPLOST).

Clayton commissioners have until July 1 to call the transit referendum. The date is contained in a bill approved this year by the General Assembly. The SPLOST vote has not been scheduled, according to Clayton’s website.

The vigil is sponsored by Friends of Clayton Transit, which is comprised of influential groups including the Livable Communities Coalition, Georgia Sierra Club, Georgia Stand-Up, SCLC, Georgia NAACP, and the Amalgamated Transit Union. 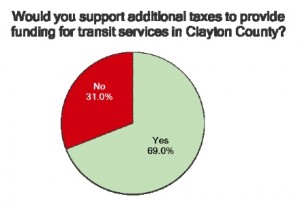 More than two-thirds of respondents would pay additional taxes to provide transit in the county. Credit: Clayton County

The organization came together in 2010, as the Clayton commission halted Clayton’s bus service due to low tax collections during the worst of the recession. Members ramped up their transit efforts in 2012, after voters in the metro Atlanta region rejected a proposed 1 percent sales tax for transit, roadway and related upgrades.

Clayton commissioners, in addition to deciding to call the referendum, are weighing the pros and cons of setting the proposed transit tax rate at 1 percent or a half-percent.

The pros of the higher tax rate include commuter rail service by 2025 and full representation on MARTA’s board of directors, according to a June 17 presentation to Clayton County commissioners. The cons include asking residents whose countywide household income is the lowest in the region to shoulder a sales tax rate of 8 percent – presuming voters in 2015 agree to extend the SPLOST. 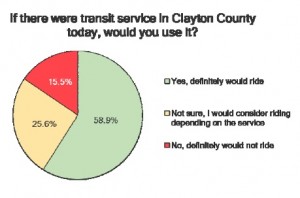 Well over half the respondents to a Clayton County survey said they would ride a transit system in the county. Credit: Clayton County

The proposed SPLOST is expected to bring in from about $226 to $272 million over five or six years, according to a news report provided on the county’s website. The tentative list of projects includes a county administration building, police facilities, a civic arena on par with Gwinnett Arena, libraries, and community dog parks.

Meanwhile, the county review regarding the transit tax proposal shows that a majority of Clayton residents are willing to pay higher taxes to provide themselves with a transit system, according to the report to commissioners.

The vigil stops short of seeking a specific tax rate or even asking commissioners to take action.

The vigil begins at 5 p.m. has one purpose, according to a flyer:

The message after the group’s logo – comprised of the words “Prayer, Love, Hope, Faith,” circling the words, “For Clayton County” – states: