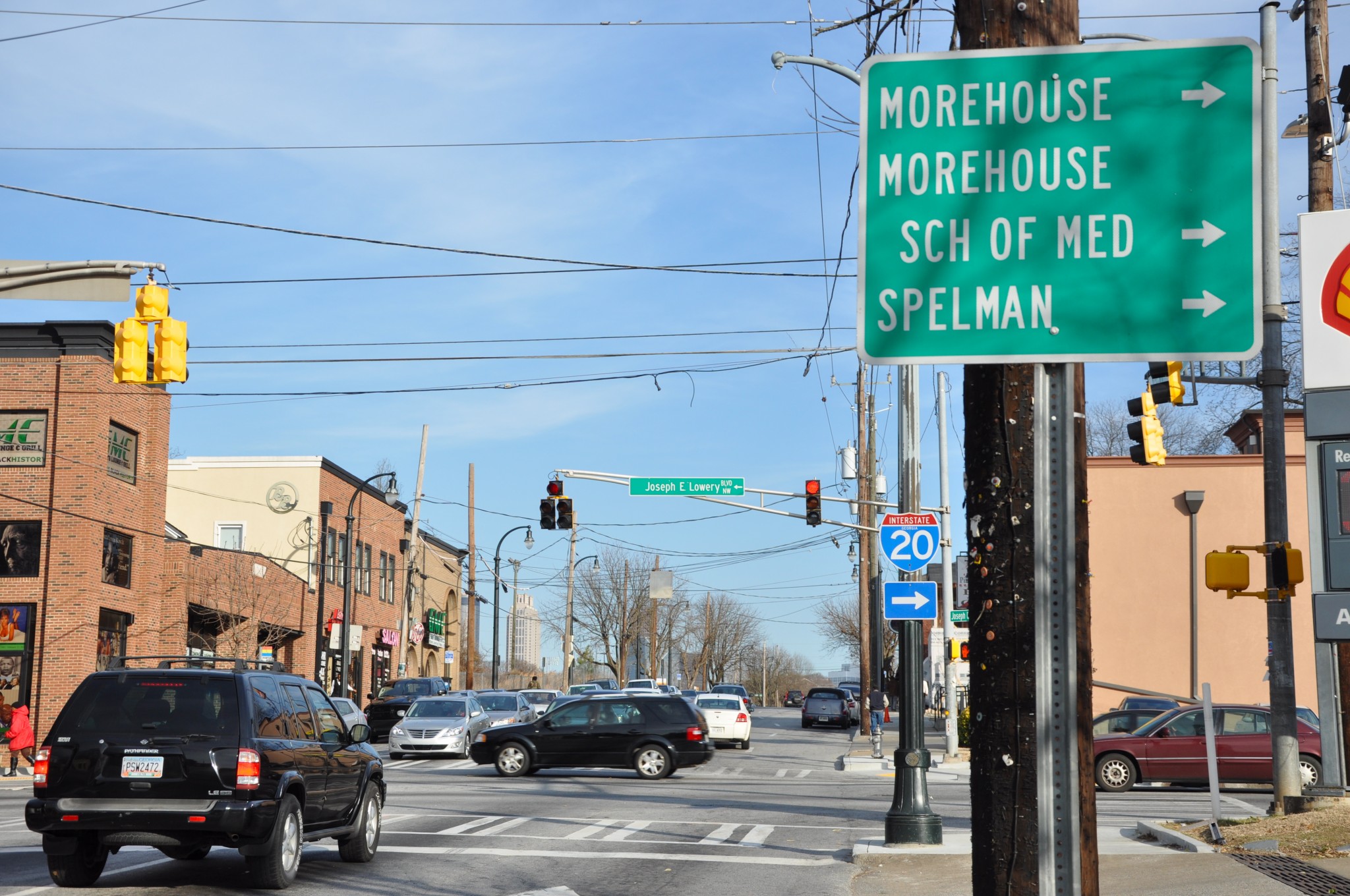 A planned VIP parking lot at the future Falcons stadium will require a virtual dead end of Martin Luther King Jr. Drive at the stadium, and will affect the road’s ability to become the grand boulevard envisioned by Atlanta Mayor Kasim Reed. 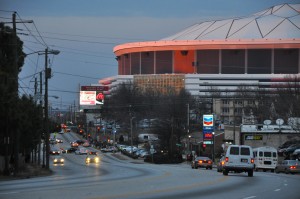 The Falcons seek to revamp this intersection of Northside Drive and Martin Luther King Jr. Drive in order to provide VIP parking at the new stadium. The Georgia Dome is to be demolished. Credit: Donita Pendered

The first public discussion of this proposal is scheduled Tuesday morning during the Atlanta City Council’s Utilities Committee. No final action on the legislation is expected, as the agenda states a public hearing will be advertised.

The Falcons contend fans will benefit from VIP parking and related traffic management plan that will enhance their game-day experience. Others contend the price of the proposal is too great because it further disjoints MLK Drive, an important east-west connector that’s already struggling.

“It’s a Chris Christie approach to traffic management in Atlanta,” said Michael Dobbins, a Georgia Tech professor of practice, referring to the New Jersey governor whose staff closed a bridge in political retaliation.

The pending legislation is on the fast-track: The procedure used to submit the legislation has cut two weeks off the length of time the legislation must remain under consideration. The legislation was submitted by Councilperson Michael Julian Bond, elected citywide, and Councilmember C.T. Martin, a representative of southwest Atlanta. Each member submitted three separate proposals. 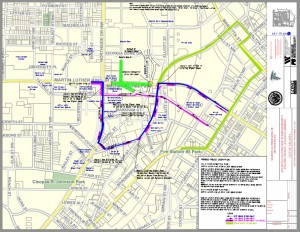 Click on the image for a larger version of one proposal for new routes around the new Falcons stadium.

Already, a portable traffic signal has been installed on MLK Drive, on the viaduct over the railroad gulch, to warn drivers of a route change dated for February.

Incidentally, this request comes the month after Atlanta completed two significant steps to help the stadium project. The council completed the process to provide up to $200 million in stadium financing, and abandoned property needed for the site of the actual stadium.

Regarding the pending proposal, the Georgia World Congress Center has asked Atlanta to abandon a total of six parcels, or rights of way, in order to facilitate the VIP parking lot and the Falcons traffic management plan.

These six parcels will result in MLK Drive being rerouted onto Mitchell Street. Here’s what the new route would mean for a driver headed toward downtown from points west of the future stadium: 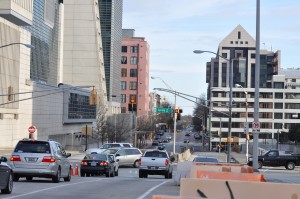 MLK Drive already is troubled by a traffic management scheme in this area, at its intersection with Spring Street near the old Norfolk Southern headquarters.

Dobbins suggests that the solution to this traffic imbroglio is to make MLK Drive a two-way street from its beginning at Oakland Cemetery all the way through the city. Any additional cut-offs would be detrimental to the corridor.

“To discontinue Martin Luther King Jr. Drive by truncating it at Northside Drive is a blow to its symbolism and culture,” Dobbins said. “It’s also a blow to the vision of MLK as a grand boulevard, as a connector from east to west.”

Mayor Reed strongly indicated that MLK Drive will be refurbished. He delivered the message during his remarks at the recent King Day memorial service at Ebenezer Baptist Church.

Reed has yet to provide details of the improvements he foresees. The mayor has spoken highly of the potential to restore stadium neighborhoods through the $30 million improvement program that’s being created, and paid for, by the city and the Blank Foundation.

Note to readers: The gallery follows Martin Luther King Jr. Drive from the BeltLine overpass, through the corridor’s mini-downtown near the old Paschal’s Restaurant and new Walmart, past the Georgia Dome and through downtown Atlanta to its terminus at Atlanta’s historic Oakland Cemetery. 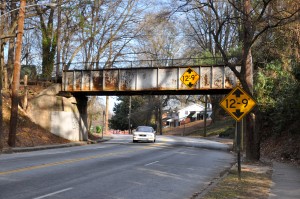 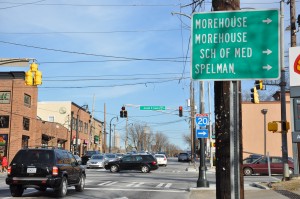 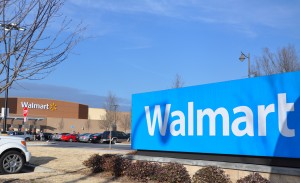 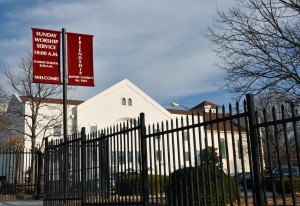 Friendship Baptist Church, at the corner of Martin Luther King Jr. and Northside drives, is to be demolished to make way for the new Falcons stadium. Credit: Donita Pendered 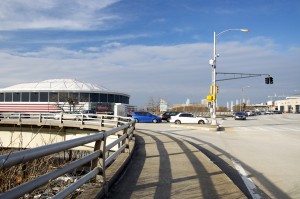 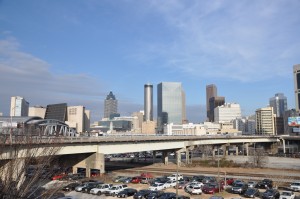 Looking north, the Atlanta skyline rises behind the Martin Luther King Jr. Drive viaduct above the gulch, where a $1.1 billion mixed use development is planned. Credit: Donita Pendered 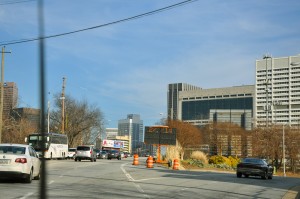 A portable traffic signal on Martin Luther King Jr. Drive, on the viaduct near the Mitchell Street curve, prepares to warn drivers of route changes in February. Credit: Donita Pendered 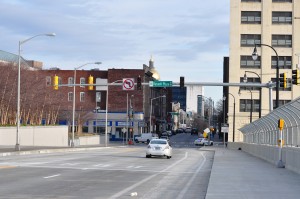 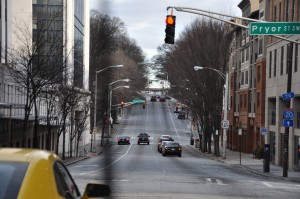 The Mitchell Street corridor leads east from Spring Street, between the Fulton County Courthouse and commercial structures, with the state Capitol near the top of the hill, on the left. Credit: Donita Pendered 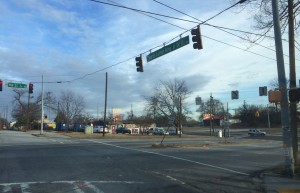 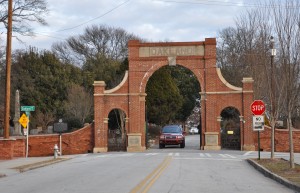 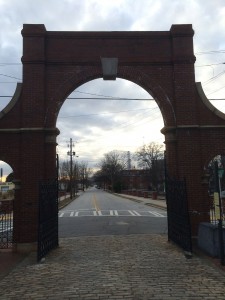 Seen through a gateway of Oakland Cemetery, the eastern terminus of Martin Luther King Jr. Drive is a collection of low-density structures. Credit: David Pendered 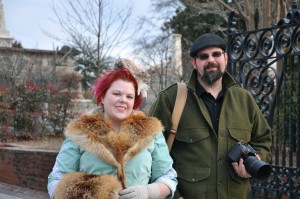