Georgia's WIN List has backed a slate of 40 candidates, including this group who gathered in December 2019, before coronavirus-related restrictions were in effect. The photo on the left is of a candidate who's expected baby was due at any moment. File/Credit: Eric Voss
Share3
Tweet
Share
Pin
Pocket
WhatsApp
Buffer3
Email
Reddit
6 Shares

The Georgia women campaigning for the state House and Senate represent the type of political dynamic to be discussed Wednesday evening in a virtual talk with the author of The Firsts: The Inside Story of Women Reshaping Congress. 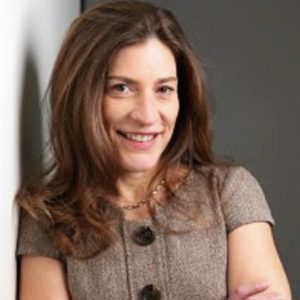 Author Jennifer Steinhauer, a reporter since 1994 with The New York Times, is to speak with Virginia Prescott, the Gracie Award-winning host of Georgia Public Broadcasting’s On Second Thought. The Atlanta History Center is sponsoring the event at 7 p.m., which is free to watch.

Steinhauer chronicles the voyage of the 35 women who, in 2019, were the largest group of women ever to take office in Congress. Only one in this freshman class is a Republican. The election of 2018 brought the total number of women to 87 in the House and 23 in the Senate.

The book is filled with the finely detailed reporting that Steinhauer polished during a career with the Times. She worked on the Metro, Business and National desks, including service as bureau chief of the city halls in New York and Los Angeles. Steinhauer moved to Washington to cover the Capitol in 2010, according to her Times’ biography,

Here are three examples, taken from the early pages of The First:

“The biggest class of women in history contained all sorts of firsts: the first two Muslim women; the first to Native American women; the first female members of Congress from their state or district, or the first Latina from their state or district, or the youngest, or a combination of those. They came with disparate résumés – community organizers, air force pilots CIA officers, entrepreneurs, a once-homeless National Teacher of the Year award recipient…. The oldest freshman, Rep. Donna Shalala (D-Fl.), had been a cabinet secretary and the president of a university.” 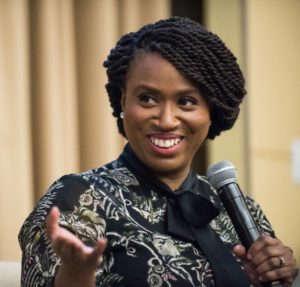 “The questions facing these women were not so unlike those faced by Rep. Jeanette Rankin (R-Mt.) the first woman elected to Congress, or Rep. Shirley Chisolm (D-NY), the first black woman in Congress, or any other woman who has ever run for congress to alter the status quo: Would they change Washington, or would Washington … change them. Would the window of good intentions remain open before the reality of American politics shut it for the next election?”

“[A] smaller group of women, most of them senior House members who had spent years vying for their power, held a press conference to celebrate female achievement over the past century. Rep. Ayanna Pressley (D-Ma.) one of only two freshmen invited to join, came to the mic in her long, stylish snow-colored coat, her lips bright red, her voice more powerful than the previous speakers. Already a force in the class of 2019, she nodded to the past, while very much trying to author the future. ‘We have the conviction,’ she boomed. ‘We have the political courage.’ And she said, ‘We have each other.’”

Meanwhile, in Georgia the female candidate campaigning for seats at the Capitol are caught up in the same coronavirus-inflicted netherworld as the rest of the field.

For starters, the grist of local politics is on hold – meet-and-greet events. The Saturday morning breakfasts have long been cancelled, neighborhood gatherings are virtual, and any funds still being raised by email solicitations are held as the date of the primary election keeps being delayed – from March 24, to May 19, and now, June 9. 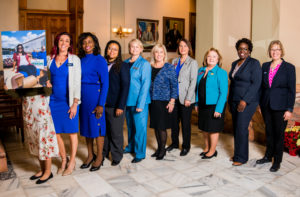 Georgia’s WIN List has backed a slate of 40 candidates, including this group who gathered in December 2019, before coronavirus-related restrictions were in effect. The photo on the left is of a candidate who’s expected baby was due at any moment. File/Credit: Eric Voss

The Georgia WIN List, which backs female Democrats, is trying to maintain momentum behind its slate of 40 candidates for both House and Senate. Georgia WIN is sponsoring Wednesday Webinars – one last week on the primary election that has been delayed, and one today on the COVID-19 situation in and near Albany, which is among the state’s hardest hit areas.

Another wrinkle in this year’s election cycle is the victory handed to challengers over incumbents on Tuesday. It came in the form of a ruling by the board that oversees the Georgia Government Transparency and Campaign Finance Commission.

The board upheld a state law that incumbents cannot raise campaign funds, or promises of campaign funds, while the state Legislature is in session, according to the board’s ruling. The Legislature is still technically in session, though both the House and Senate are suspended and are to, “resume at a future date to be determined,” according to statement.