A spirit that feels a lot like hope surrounds the Vision Zero mobility policy announced by Atlanta Mayor Keisha Lance Bottoms. The city may have found a guiding light for moving folks no matter how they get around. 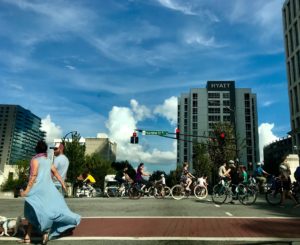 Peachtree Street serves a mixture of travel modes that compete for space, including a dog out for a walk on a sunny day. Credit: Kelly Jordan

Rebecca Serna, executive director of Atlanta Bicycle Coalition, defines Vision Zero as an expectation that has gone missing from what used to be the civitas of Atlanta’s streets and highways:

Mike Dobbins, a former Atlanta planning commissioner now teaching at Georgia Tech, said he “completely supports” the design concepts of Vision Zero. Strides in safety can be achieved fairly quickly, he said, and within the confines of existing roads and rights of way:

Atlanta newly released Strategic Transportation Plan provides an equally unvarnished goal of safety during travel. Bottoms unveiled the plan Nov. 13, as the transportation platform for the next two years of her administration. The mayor also announced her appointment of Josh Rowan, subject to confirmation by the Atlanta City Council, as the city’s first commissioner of the recently created Atlanta Department of Transportation. Rowan currently oversees construction projects funded by Renew Atlanta and the transportation sales tax. 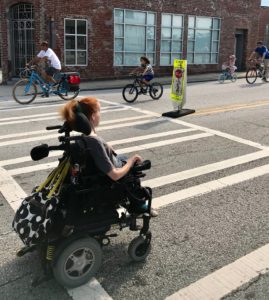 The Strategic Transportation Plan observes at its outset:

Vision Zero could serve as a unifying vision for the project lists floated during the campaigns for citywide sales taxes for transportation and Renew Atlanta. That said, the journey it contemplates has a different starting point and trajectory.

Rather than promising a Complete Street here or a sidewalk there, in order to woo voters, Vision Zero promises to promote a concept – safe travel within the city.

As such, Vision Zero is an aspirational proposal that invites residents to think of a future that could be. The city has been down this path before – aspiring to host the 1996 Summer Olympic Games; aspiring to stop polluting the Chattahoochee River with a sewerage system so old that some was built in the mid 1860s – years before Alexander Graham Bell patented the telephone, in 1876.

The mayor’s schedule, cited in the plan, calls for the Atlanta City Council to adopt Vision Zero in 2020. That would be on track with the timeline to for the city’s recently created Department of Transportation functioning by late 2020 under the guidance of the newly appointed transportation commissioner, according to the enabling legislation.

Concerns already are rising that speed limits could be reduced to implement Vision Zero. A fundamental concept of Vision Zero is that lower speeds reduce the extent of injuries, or death, a pedestrian would sustain when struck by a vehicle. Advocates say that’s not the case. 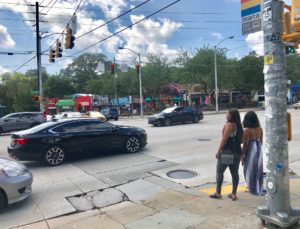 Serna noted that drivers if speeds are lowered, a driver may be speeding at 35 mph in a new 25 mph zone, as opposed to 45 mph in a previous 35 mph zone. The lower speed would reduce injuries and save lives during collisions. The coalition’s report on speed limits touches on the point.

Dobbins observed that lower speed limits have been proven to reduce trip times in certain scenarios.

That point emerged from a prior study of Memorial Drive conducted by students in a previous studio. And it has emerged again from a current study of Moreland Avenue that students in his studio are preparing to complete.

Posted speed limits are a fiction, anyway, he said. That’s the real-time finding along Moreland Avenue in the study area, from Freedom Parkway to Edgewood Avenue.

“The average speed in rush hour is 8 mph over that stretch of Moreland,” Dobbins said.