This story has been updated to reflect events at a groundbreaking ceremony Monday.

A Wal-Mart that’s been long-awaited in Atlanta’s Historic Westside Village is slated to open in January 2013, bringing 200 jobs and a grocery that will relieve a food desert west of the Georgia Dome, Atlanta Councilman Ivory Lee Young, Jr. said Sunday. 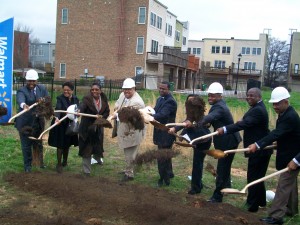 Construction is slated to begin within two weeks, said Glen Wilkins, Wal-Mart’s senior manager of public affairs for the Southeast.

The project is viewed as a tremendous boon to the neighborhood, which faces hard times despite its historic legacy. Local leaders are now promoting the adjoining Sunset Avenue Historic District as a tourist destination, with its collection of sites where early Atlantans settled, and where civil rights leaders met.

Meanwhile, in Decatur, plans for a Wal-Mart continue in the face of opposition by some residents. Selig Enterprises intends to build a supercenter with 149,130 square feet that will be flanked by out parcels providing an additional 175,000 square feet of commercial space, according to Selig’s site plan. 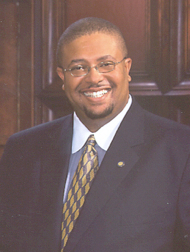 The delegation of elected officials who joined in the celebration Monday included state Rep. Calvin Smyre (D-Columbus), one of the state’s more influential lawmakers, who said he attended at the behest of Mayor Kasim Reed; Fulton County commissioners Emma Darnell and Joan Garner; and the Atlanta City Hall representatives including the mayor, Young, council President Ceasar Mitchell, and Councilperson Michael Julian Bond.

Bond represented the district when the first groundbreaking occurred at the development then called Historic Westside, in the mid 1990s.

“We are retilling the earth once again, renourishing the soil to grow something good for the community,” Bond said.

At Historic Westside Village, the Wal-Mart will be developed at the site of a former Publix grocery. An affiliate of H.R. Russell and Co., which developed condos nearby and once intended to develop the retail sector, is no longer in the retail deal, Young said.

Young added that Russell has performed an invaluable community service at the property, which is located across Martin Luther King, Jr. Drive from the original Paschal’s restaurant and motor lodge.

“Russell sustained the development for well over a year,” Young said. “They searched high and low for a grocer, knocking on every door there was until we got Wal-Mart.”

Atlanta has invested in the development, as well. Over the past 15 years, Atlanta provided about $70 million to the mixed use project, all of it through loans and grants from Atlanta’s development arm, according to city records. The project was envisioned during the third administration of former Mayor Maynard Jackson, in the early 1990s, and construction began during the administration of former Mayor Bill Campbell. 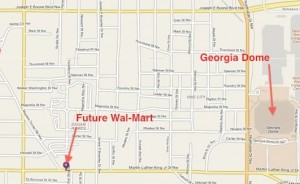 This map shows the location of the planned Wal-Mart at Historic Westside Village, in relation to the Georgia Dome

Young said Wal-Mart has promised to help local residents win jobs by providing them with training programs before the store begins hiring employees. And Wal-Mart has agreed to provide groceries at a market location few others were willing to enter, Young noted.

Reed said the new Wal-Mart will strengthen the community. He commended the retailer for opening its store and observed that it is rare for a community to lose one business (Publix, in this case) and have another business come along that is even stronger than its predecessor.

Reed also commended Quincy Springs, a Wal-Mart manager who has agreed to transfer to the new store from the successful Wal-Mart near the corner of I-75 and Howell Mill Road.

“I call him Quincy Jones because his name is music in my ears,” Reed said.

The size of the planned store is in keeping with a new strategy Wal-Mart adopted after shoppers abandoned the retailer during the worst of the recession for other shops that offered deeper discounts.

At the time, Wal-Mart’s U.S. president, Bill Simon, was shifting the company’s expansion strategy toward the establishment of smaller stores in urban areas. Many Wal-Mart stores were 150,000 square feet, and supercenters could reach 200,000 square feet.

Simon aimed to reestablish Wal-Mart as the one-stop shopping destination for households earning from $30,000 to $70,000 a year. Under that approach, Wal-Mart has rebounded, joining companies including Home Depot in benefiting from an uptick in consumer spending that matched the Dow’s increase since last summer.

Meanwhile, Wal-Mart has become embroiled in a controversy over a store planned in Decatur.

The planned Decatur store is to be built on the site of Suburban Plaza, a 1960s-era shopping center owned by Selig Enterprises. Selig is the same company that built a live-work-play center anchored by a Wal-Mart on Howell Mill Road, a few miles north of Historic Westside Village.

Selig’s plans show the Decatur site is to provide a Wal-Mart Supercenter with about 149,130 square feet. The Wal-Mart is to be flanked by parking spaces and out-parcels providing an additional 170,000 square feet of leasable space, according to Selig’s site plan.

Previous Article
Deepening the Savannah port and other U.S. ports may not be in best interest of taxpayers
Next Article
Hunger Walk 2012 helps build a stronger Atlanta community