Wolf Blitzer, an anchor with CNN, explained that Turner purchased the Techwood campus – the former Progressive Club property – in the fall of 1979. It became the first home of CNN, a 24-hour news channel that changed the television news industry. CNN, which stood for Cable News Network, was launched out of Atlanta on June 1, 1980. 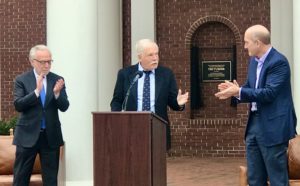 John Stankey, president and chief operating officer of AT&T Inc. (NYSE: T) who is also CEO of Warner Media, told a crowd of about 200 people gathered on the front lawn of the Techwood campus, that Turner’s “decision to launch CNN, changed the world.”

In addition to naming the Techwood campus after Turner, WarnerMedia also made a $550,000 grant to the University of Georgia to further Turner’s legacy. The grant will go towards:

WarnerMedia also unveiled a plaque and a mural in Turner’s honor while making a champagne (or sparkling cider) toast in his honor.

“I’m kind of overcome by this whole ceremony,” Turner told the crowd, which gave him several standing ovations. “Never have I lived through something like this.” 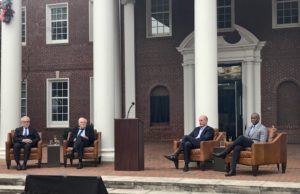 Then in his usual disarming Ted Turner style, he sentimentally said: “I miss it. I didn’t really leave because I wanted to. But anyway, here I am, and I want to thank all of you from the bottom of my heart for this wonderful ceremony.”

Turner Broadcasting was acquired by Time Warner, and then Time Warner merged with AOL – later viewed as an unsuccessful combination – a move that ended up costing Ted Turner’s spot on the corporate board. The AOL name later was removed from Time Warner.

Last year, AT&T acquired Time Warner – and the company reorganized the media entities of the new merged company. Ted Turner’s name was systematically removed from all entities that he had created, and the new entity WarnerMedia was created. WarnerMedia is based in Los Angeles, and AT&T is based in Dallas.

Stankey, who did not address the removal of Turner’s name from the media empire he had created, acknowledged the significance of what Turner had created. 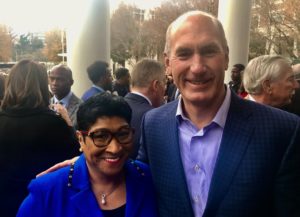 “This might be the best thing I do this year,” Stankey said at the campus dedication. He went on to say that Turner had had an incredible body of work that was multidimensional. Although it couldn’t be summed up in one word, Stankey said that the word that came to mind was “audacious.”

As an example, Stankey remembered when Turner purchased the MGM library of movies. Stankey recalled how people at the time said: “You’ve got to be kidding me,” acknowledging that he paid that little for all of that content.

“You set an amazing example for all of us,” Stankey said. “We needed to do something to mark the appropriateness of that.” He then sent a message to the “5,000 energized and committed employees who come to work here every day” saying they could all be mavericks like Ted Turner has been all his life.

“We are going to be forever honored and awed to be associated with your legacy,” Stankey said.