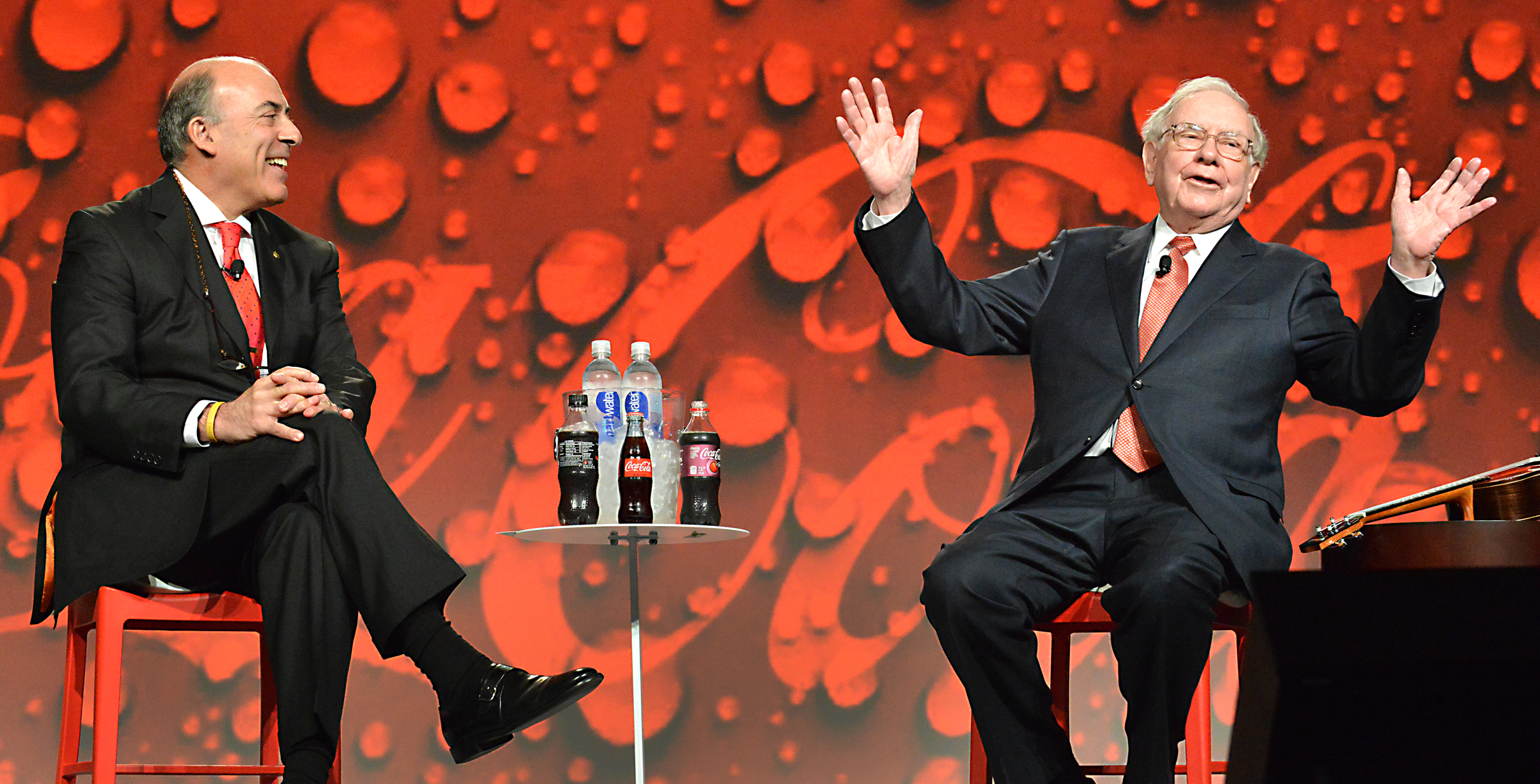 When it comes to annual meetings, the greatest show in Atlanta is the Coca-Cola Co. – and the 2015 meeting did not disappoint.

Early in the meeting at the Cobb Galleria Centre, Coca-Cola CEO Muhtar Kent introduced a special video. Multi-billionaire Warren Buffett appeared on screen with a ukulele and began to sing: “I want to buy the world a Coke.” And then he looked into the camera and quipped:  “Of course, I guess I could buy the world a Coke, but I’m not sure my shareholders would go for that.”

Kent then told the crowd of about 700 shareholders that Buffett had come to address the annual meeting once again (the last time was two years ago).

Kent and Buffett, a longtime director on Coca-Cola’s board before his son Howard Buffett joined the board in 2010,, has sometimes expressed displeasure at some of the company’s policies, such as executive compensation. 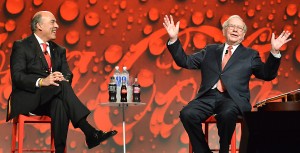 The two men sat on stage and had a 15-minute, relatively casual conversation on topics ranging from Buffett’s views of the world, his thoughts about the Coca-Cola Co., his biggest fears and the late Don Keough.

The meeting – that lasted for nearly two hours – included the usual back-and-forth between the vocal shareholder Ray Rogers, founder and director of the Stop Killer Coke Campaign, and CEO Kent. It almost wouldn’t have been the regular annual meeting Coca-Cola show without Rogers shouting out his charges after his time limit had expired.

Most shareholders took it all in stride.

“Please don’t interrupt me,” Rogers told Kent when he was challenging the election of directors for not seriously asking about deaths that he said Coca-Cola had caused around the world. “If you want to, throw me out.”

Kent said those charges didn’t have any merit.

One shareholder proposal did seem to have some traction. John Harrington, president of Harrington Investments, had submitted a proposal that anyone who owned 3 percent of the company’s outstanding common stock for at least three years would be eligible to have a seat on the board.

Kent said the company saw merit in such a proposal and was talking to various investors to figure out a reasonable approach and the “strike the right balance.” Meanwhile, the company urged shareholders to vote against the proposal.

The preliminary result: 40.6 percent of shareholders voted for it.

Shareholder Paul Roberts said that as someone who has a lot riding on the stock of Coca-Cola, he questioned whether the company was following the right strategy or whether it needed to broaden its focus.

Kent said the company would continue to listen and follow the consumer, and that does not mean staying with the same strategy. “It’s moving and staying ahead of consumer trends,” Kent said. “We have tremendous potential.”

A representative promoting GMOs – genetically modified organisms – urged Kent to quiet critics and come out in support of his industry.

Kent carefully stepped around the issue by saying he would be happy to participate in discussions between government, business, scientists and public policy to see if there was consensus moving forward.

One shareholder asked about how Coca-Cola viewed the possibility of being able to do business in Cuba.

“We have to operate in accordance with the laws,” he said. We are of course very much eager when the time is right to connect with the 11.5 million Cuban consumers.”

Atlanta shareholder Bernie Goldstein questioned the composition and seniority of the board. “Some of our directors have been on the board far too long,” he said. “One has been on 33 years; another 24 years.”

Kent defended the board as being “one of the best and most informed boards in America today,” but he added that “since 2009, we have had eight new directors.”

The company has a new lead director – former U.S. Sen. Sam Nunn, who replaced James Robinson, who just went off the board. Kent said diversity on the board has improved with four women directors, and the average tenure has gone from 15 years to eight.

Jesse Jackson, founder of the Rainbow Coalition, praised Coca-Cola for several of its initiatives around the world. But he urged the company to do more.

He said he was concerned that the company had not sufficiently expanded its marketing and advertising business ties with diverse firms and that it needed to recruit minority bottlers.

Kent thanked Jackson for being such a “keen observer” and for being a partner with corporate America.

At one point, when he got the microphone again, Killer Coke Rogers started shouting at Jackson saying he would never vote for him for president. And he accused Coca-Cola for allowing child-labor in the cutting of sugar cane in Latin America.

Kent said that his claims in the past have always been outlandish, and that he has always tried to grab the headlines, “therefore I will not answer your questions any further.”

The highlight of the meeting, however, was the interchange between Kent and Buffett.

Buffett also said that he keeps turning to the United States as the best place to invest.

“We still have got the secret sauce,” Buffet said. “We will always bet on this country at Berkshire Hathaway.”

“Nothing worries me except the real threat of cyber and nuclear war and weapons of mass destruction,” Buffett said. “There are a lot of people who would wish evil on their neighbors and especially the United States. That’s why I support Sam Nunn and the Nuclear Threat Initiative.”

He also felt that Coca-Cola had not tapped out its full potential, and he repeated his claim that he is one-fourth Coca-Cola – that one-fourth of all the calories that he consumes come from Coke or Cherry Coke.

“Every great company is going to listen to its consumer,” Buffett said. “This company has a history of listening to its consumers, and you have to make it extremely convenient for people to buy it.”

Then Kent and Buffett remembered the late Don Keough, the former president of the Coca-Cola Co., who passed away earlier this year.

“Everybody loved him,” Buffett said. “He had an intergenerational appeal.”

Buffett said he recommended Keough to serve on the board of the Washington Post, and he was on Berkshire Hathaway’s board until he died. Buffett said he didn’t care how old Keough was.

After the meeting, Sam Nunn was asked about what Buffett had said about the  threats of weapons of mass destruction.

“He’s a huge supporter of ours,” Nunn said of the Nuclear Threat Initiative. “I think we are in a new era that’s not fully realized. Governments no longer have a monopoly over weapons – cyber or biological. The trends have accelerated.”

Previous Article
Atlanta Streetcar free to ride this year because Breeze card isn’t feasible, city says
Next Article
Photo Pick: Everyday is a good day for some King of Pops by Rachel Letcher