Washington, D.C. — Education reform is alive and well in the nation’s capital.

Members of metro Atlanta’s LINK delegation were enamored with Kaya Henderson, the chancellor of Washington, D.C. public school system, after she addressed regional leaders about the change underway in one of the highest-profile systems in the nation.

Henderson joined the staff of the Washington, D.C. public schools in 2007 as part of the Michelle Rhee administration. Henderson, who had been an alumnus of Teach for America and the New Teacher Project, had been a protégé and associate of Rhee. Her role in the Rhee administration was “human capital,” primarily working with the teachers, some of whom were resistant to the far-reaching reforms underway.

The Washington, D.C. school system, under Rhee’s leadership, gained national attention for the drastic changes she was trying to put in place. But her style and lack of consensus-building ended up with her being ousted in 2010. 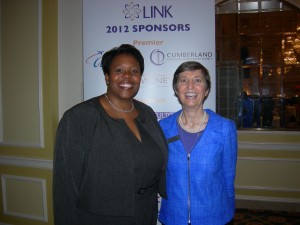 It was in October, 2010 that Washington, D.C. Mayor Vincent Gray asked Henderson to step in as chancellor.

Interestingly enough, Henderson said “the city did want to keep going in the direction we were going in.”

The leadership styles of Rhee and Henderson, however, have been remarkably different. It was clear that Henderson is just as committed to reforming Washington, D.C.’s school system, but she has been careful to make sure she has buy-in from the various constituencies involved.

“I haven’t regretted it for a day,” said Henderson, adding that she has the best job in the city if not the country. “We want to make sure the revolution occurs in the classroom.”

When she and Rhee joined the school system in 2007, they were taken aback by the multitude of problems.

“We found an organization that was completely dysfunctional,” Henderson said. “We were losing 2,000 to 3,000 kids a year.”

First they had to deal with operational problems, and then they realized there was a total disconnect between teacher performance and the experience in the classroom. She said 98 percent of the teachers had received evaluations that they were meeting or exceeding expectations while only 8 percent of the students were performing at or above grade level. 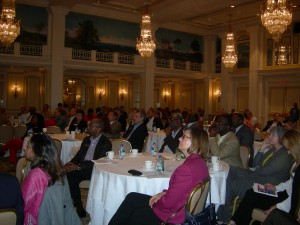 About 110 metro Atlanta leaders listen to presentations in Washington, D.C. at the Willard Inter-Continental Hotel (Photos by Maria Saporta)

They ended up changing the compensation package to be based on merit — giving bonuses to the highest-performing teachers and “re-energizing” the experience in the classroom. They also eliminated seniority, which angered several teachers.

On Wednesday, the day before Henderson addressed the LINK delegation, she released her own five-year plan for reform with recommendations and goals that will continue the revolution.

“We have 123 schools with 47,000 kids,” Henderson said, adding that they will have to close and consolidate schools so they can better manage their resources. Sound familiar?

Goal 1: improve the percentage of students meeting and exceeding proficiency in reading and math from the current 43 percent to 70 percent. Part of that goal is to double of students in advanced classes.

Goal 2: Forty of the District’s 123 schools lowest-performing schools need to be turned around from only 23 percent of the students doing math at grade level. The school system is implementing a pilot technology program where students can play video games while learning math skills. Henderson said that some students were able to complete three semesters of math skills in only 30 days by using the technology.

Goal 3: Increase the graduation rate of 9th graders completing high school in four years from the current 53 percent to 75 percent. Already, the system has been attracting new students because of its reforms.

“We want to be the school district of choice,” Henderson said. “We want to show what a high-performing, urban school system can be.”

At the end of Henderson’s presentation, the LINK delegation were inspired.

Tad Leithead, chairman of the Atlanta Regional Commission, summed it up this way. On every LINK trip, there are at least a couple of speakers and presenters who really standout and provide ideas for Atlanta. On the Washington, D.C. trip, Leithead said Henderson had made that list.