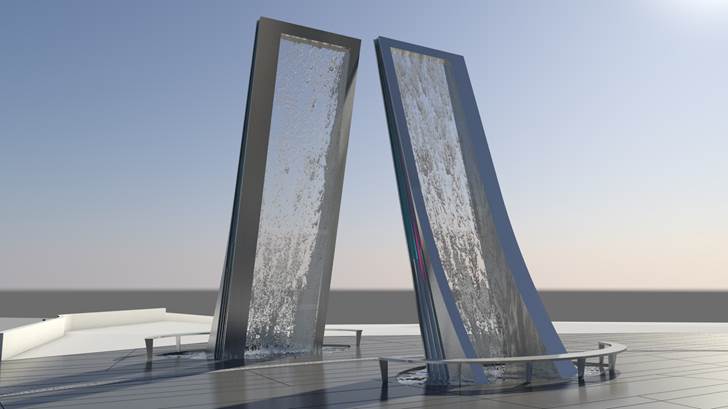 The two sweeping glass panels — rising 30 feet high — will contrast the design of the Center’s two walls, which will tower 72 feet high, and rise from a plaza at the corner of Ivan Allen Boulevard and Centennial Olympic Park Drive downtown.

The water sculpture will become the connecting focal point of the plaza sitting between the Center and downtown. Quotes from the civil and human rights movement will be etched into the two glass panels, and people will be able to be inspired by those words as they walk between the two. 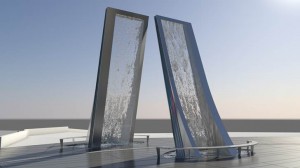 The water feature was added to the design of the Center last year at the strong request of Atlanta Mayor Kasim Reed. The city is a major investor in the project.

“My idea was that since the building is going to be iconic and unique in terms of the city, I wanted a water feature that was worthy of its design,” Reed said in an interview. “I’m going to continue to advocate for more water features in Atlanta.” 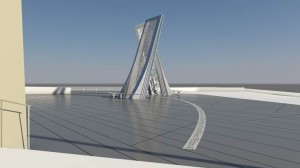 Reed said that in taking trips to other cities, especially Chicago, San Francisco and Paris, he has been struck by the importance of great pubic spaces, plazas, art and fountains.

“I believe our city should have more special places in it,” Reed said. “We want to have more water features that are part of the landscape of our city, features that create a stronger sense of place.”

A collaborative effort was put together to pick a design team for the Center’s water feature that included representatives from the Center, the city, The Coca-Cola Co., the arts community and the design community. 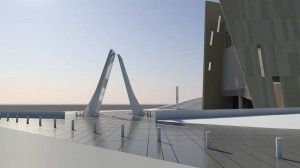 “The group wanted a very thoughtful water feature to be a centerpiece on the plaza and be a focal point yet have an interpretive quality to it,” Faga said. “The group liked the quality where you walk through it and look at the quotes etched into the glass with the water while listening to the sounds of the water.”

The group asked for requests of qualifications and selected five finalists before picking Larry Kirkland of the Greater Washington, D.C., area, who has designed a multitude of installations around the country. Among his commissions are the Civil Rights Garden in Atlantic City, N.J.; Pennsylvania Station in New York City; the American Red Cross headquarters and the National Academies of Science in Washington, D.C., as well as a host of international projects.

Other members of the team include Fluidity Design Consultants, which will do the fountain design; and Joel Straus Consulting, which will be the project manager. 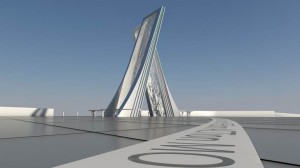 Another angle of the water sculpture

Once the Kirkland design team was selected, the team worked on the design, which was finally approved earlier this month.

“The mayor was amazingly involved in this,” Faga said. “He participated in every one of the interviews, and he spoke thoughtfully about civil and human rights in Atlanta. He wanted people to smile when they saw this.”

Reed said he actually hopes the water feature will elicit several emotions. He described the glass panels as though they are “soaring” and causing people to look up to the sky.

“I wanted something that would make people smile and make them feel there was more to do for civil and human rights — the responsibility it places on us all,” Reed said. “It’s a time to pause and a time to get to work.”

Doug Shipman, CEO of the Center, said the cost of the water feature will be between $750,000 and $1 million. It has been incorporated into the budget, and the building is still expected to open debt-free and with a $5 million endowment. It has raised nearly $77 million so far, and fund-raising is continuing through construction.

“We have been looking for and talking to specific donors,” Shipman said about possible donations that would cover the cost of the water feature. 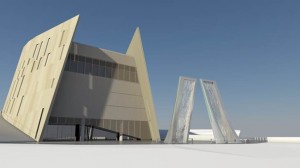 Water sculpture to the right of the Center now under construction

The design is being done to minimize evaporation and the use of water. The water will be recycled, and the Center is capturing rainwater in a cistern, which possibly could be used to replenish the water. Also the water flow could be varied depending on the situation. And the glass panels will be lit at night so they will be able to glow in the dark.

As for the quotes, Shipman said they are still working on which would be the best civil rights and the best human rights quotes to include on each panel.

The way that the panels will sit on the site, the water feature could either be the first or the last space that visitors will experience at the Center, and it will help set the mood.

The mayor agrees. “I think it’s going to be a wonderful addition to a place that’s already going to be important to America,” Reed said, adding that it will make a grand statement — just by its size and presence. “It’s the real deal.”