This story has been updated to correct the location of the mall in Atlantic City.

What does a strip retail center in Norcross have in common with a four-diamond hotel in the French Quarter of New Orleans and a fancy shopping mall near Caesars in Atlantic City? 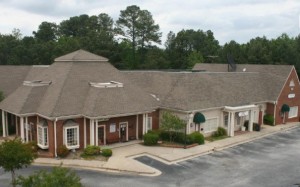 This retail center in Norcross is on the auction block for $1 million, a substantial reduction from the asking price of $6.5 million a few years ago. Credit: auction.com

All three appear in an ad for foreclosed properties that ran Aug. 1 in “The Wall Street Journal.” They’re part of an online auction of more than $1 billion worth of non-performing notes.

This juxtaposition could be just another weird aspect of life after the recession. Or, it would be just weird if it weren’t such a clear sign of lingering malaise in commercial real estate in metro Atlanta and other markets.

The starting bid on the Norcross property is $1 million. That is more than a fire sale price on a parcel for which the asking price in 2007 was $6.5 million, according to an online listing at loopnet.com.

Gwinnett County has appraised the 4.2 acres and four buildings at $3.17 million. That’s close to what records show one owner paid for the parcel in 2005. Three years later, the parcel sold for $3.7 million to a company named Spalding Village, LLC. In March, it was sold to a California-based company for zero dollars, according to the Gwinnett Tax Appraiser’s office. Now, it’s on the auction block.

Other signs of weirdness abound.

Consider a dissertation dated in July by a doctoral candidate at Georgia State’s College of Business. The topic evidently was refined over the past year to focus on woes in lending to the commercial real estate industry.

According to the 2011 resume of PhD candidate Philip Seagraves, he intended to write his dissertation on the topic of: “Demand shocks and institutional investments in REITs,” referring to real estate investment trusts. The dissertation that was accepted by the College of Business is titled: “A Multi-Factor Probit Analysis of Non-Performing Commercial Mortage-Backed Security Loans.”

As Seacrest wrote: “The increased level of commercial mortgage loan defaults from 1 percent at the start of 2009 to 9.32 percent by the end of 2011 provides motivation for questioning underwriting standards which previously served the lending industry well.”

Even in the recession of 2002, the region employed an annual average of 123.8 million in construction, according to BLS figures. BLS reports show that metro Atlanta’s employment in construction peaked in 2007 and has declined every year since:

Previous Article
It’s time for Atlanta, Fulton and DeKalb to retake control of their own destinies
Next Article
Arthur Blank’s 1978 firing led to Home Depot, Falcons re-birth and countless benefits for Atlanta