A scene from Steven Spielberg's "West Side Story"

If, like me, you can finish that second line (“You’re never disconnected”), then, like me, you may have some trouble with the very idea that someone has remade “West Side Story.”

Even if that someone is Steven Spielberg.

The 1961 movie, which won a boatload of Oscars (including Best Picture), holds a kind of sacred place for those of us who love musicals. Plus, its use of New York was so iconic, so original that the clunkier parts (a hugely miscast Richard Beymer, an adorable but hardly Hispanic Natalie Wood, ‘50s “hip” dialogue – Dad-dio? – that hasn’t aged well) didn’t matter so much. Besides, there’s that score, that dancing, that George Chakiris, that Rita Moreno.

But…if someone’s going to mess with “West Side Story,” we’re lucky that someone is Spielberg. 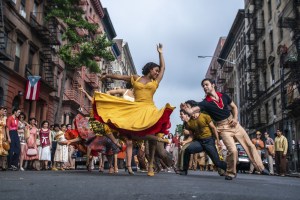 He is smitten with the original and even as he changes it, he honors it. His version is grittier, more overtly socially conscious. Sometimes, perhaps, a little too socially conscious, especially in its much-discussed casting (whites are white, Latinx are Latinx) and careful message-mongering. Still, he and co-adapter Tony Kushner have made a very strong movie.

As I think most of us know, “West Side Story” is an updated (as in the 1950s) take on “Romeo and Juliet,” with the Caucasian gang, the Jets, and the Puerto Rican gang, the Sharks, replacing the feuding Montagues and Capulets. Things get complicated when Tony (Ansel Elgort), best pal of the Jets’ leader Riff (Mike Faist), and Maria (Rachel Zegler), sister of the Sharks’ head honcho, Bernardo (David Alvarez), fall in love. In the film’s most celebrated image, the pair imitate Shakespeare’s balcony scene on a fire escape.

There is an essential thrill in the ’61 version that simply can’t be replicated. Like the lengthy dance prologue (a good deal more self-aware and prankish than in the new version).  And while Zegler has a freshness and authenticity Wood couldn’t hope to match, she doesn’t have Marni Nixon’s voice (Nixon was famous for dubbing everyone from Wood to Audrey Hepburn in “My Fair Lady.”) 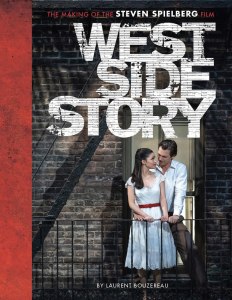 Movie poster of “West Side Story”

Elgort reminds us how disastrous Beymer was. Alvarez can’t, perhaps, match the feline charisma of Chakiris, but he’s quite good, as is Faist who has a feral presence that his predecessor Russ Tamblyn could never summon. And Ariana DeBose, who plays Bernardo’s girlfriend Anita (and is on her way to an Oscar), seems blessed by the presence of the original Anita, Moreno, in the invented role of Valentina who owns the drugstore that’s somehow still standing among the rubble that is the rest of the west side.

Speaking of genius, the marvelous William Hurt died over the weekend at age 71. He gave unforgettable performances in a score of movies, including “Body Heat,” “Broadcast News,” “The Big Chill,” “Children of a Lesser God” and “A History of Violence.” He won an Oscar for “Kiss of the Spider Woman.” I was lucky enough to see him on stage (a lot) when I lived in New York in the ‘70s. He was amazing even then. He’d be playing opposite someone like Jeff Daniels or Christopher Reeve, and you barely noticed them. Yes, he was that good.

Previous Article
Reflections of a climate change candidate
Next Article
For his 90th birthday, let us honor Andrew Young by making Atlanta a city of peace