What’s in a name? Atlanta BeltLine brand takes in many streetcar, pathway projects

The Atlanta BeltLine is evolving quickly into a name-brand transit system that could serve thousands of streetcar riders and untold numbers of cyclists and pedestrians by the end of this decade.

That’s partly because the name “BeltLine” has become shorthand for four proposed streetcar projects to be paid for through the proposed 1 percent sales tax for transportation. Just half of the 10-plus mile streetcar system would be built in the BeltLine corridor, but its linkage to the BeltLine has earned it a BeltLine tagline.

The way several BeltLine officials explain it, this evolving view of the BeltLine results from its central role in Atlanta’s ongoing efforts to improve mobility in the region’s urban core. 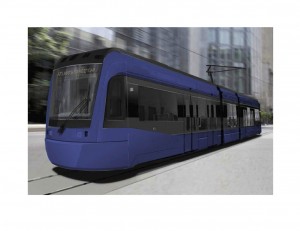 This mock up illustrates the modern look planned for vehicles that will comprise Atlanta's fleet of streetcars. Credit: City of Atlanta

“We are pursuing an aggressive, integrated strategy to build out the transit network in the City of Atlanta over the next 10 years,” said Ethan Davidson, spokesman for the BeltLine. “The streetcar concept and BeltLine are not happening separately. They are happening together and will be built out as part of the same process.”

To get a sense of the blurring boundaries, consider the formal name of the $600 million streetcar project as listed by the committee that crafted the project list for the proposed sales tax, the Atlanta Regional Roundtable: “Atlanta Beltline and Atlanta Streetcar Transit and Trail.”

The original vision for the BeltLine was of a linear park in the shape of an oval, with transit and trails built on 22 miles of railroad corridors. Tax incentives were created to spur construction of homes, offices and shops along the trail and in adjoining neighborhoods.

Now, the vision of Atlanta’s transit plan is more complete, and complex. The name “BeltLine” often seems to be attached to everything except the Atlanta Streetcar in a comprehensive mobility plan that includes:

The BeltLine’s chief transit and transportation planner, Nathan Conable, explained his thoughts on why the BeltLine is becoming the de facto descriptor for the streetcar and BeltLine projects.

“Five years ago, there were two completely separate conversations about the BeltLine and the streetcar,” Conable said. “What has happened over the past 18 months is that we’ve tried to pull the conversations together.”

Here is Conable’s description of how the conversations are merging:

“Now we’re talking about one integrated system of transit serving the city and region, and taking away any barriers so that these systems will function as one thing and be as useful to the rider as they can be, while still supporting the vision of building out the BeltLine and creating economic development for the city and the region.”

Here are the streetcar scenarios, as defined by the Atlanta Regional Roundtable. The first project, Atlanta Streetcar, is fully funded. Major funding for the other streetcars projects are included in the proposed 1 percent sales tax for transportation.

Click here to read more about these and other projects that will be funded if voters approve the 1 percent transportation sales tax:

According to the project list, the overall streetcar project would connect the following destinations: 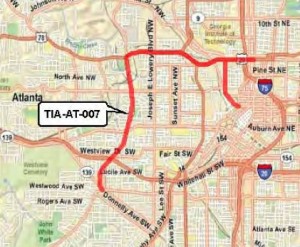 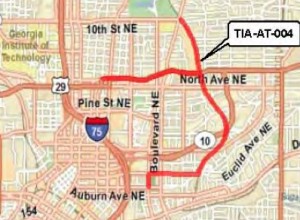 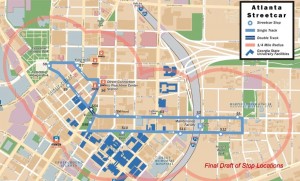 This is the route of the Atlanta Streetcar, in Downtown Atlanta. Credit: atlantadowntown.com