Whether product of tactical urbanism or community effort, East Atlanta has a park 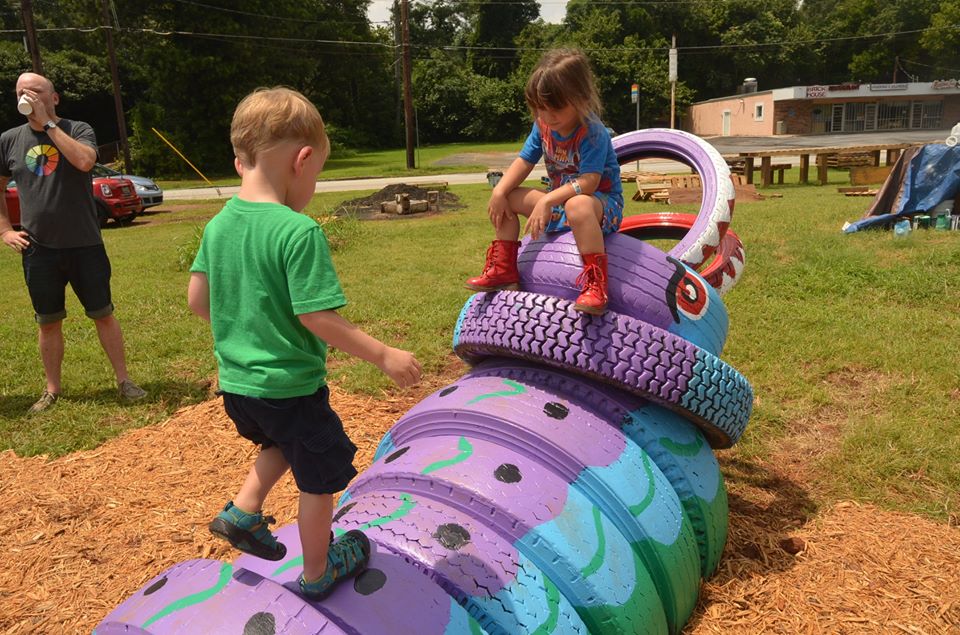 Residents of East Atlanta who helped build a community gathering place found that they built something in addition to a park – a real sense of community. 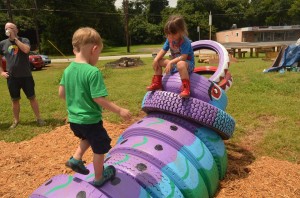 To hear Joe Peery describe it, the community park came together in a fashion similar to the soup in the folktale about stone soup. This the fable in which a traveler stops in a village and offers to make soup from just water and a stone, and ends up making a hearty stew with morsels donated from many kitchens in the village.

“While we were out working, people would stop by and ask what we were doing,” Peery said. “’Making a community garden.’ They’d say, ‘I have stuff I could bring over,’ and they’d offer to help out.

“It was just a bunch of neighbors getting together to build a community garden,” said Peery, who moved to East Atlanta in 2009. “I got to know neighbors whom I’ve just waved to for the past couple of years.”

Volunteers showed up and worked on Saturdays in June and half of July. The effort was led and funded by Atlanta Councilmember Natalyn Archibong. 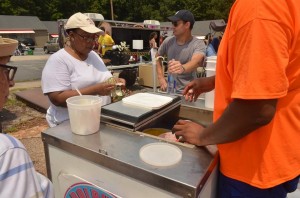 Atlanta Councilwoman Natalyn Archibong buys a cold treat from Dolphins Water Ice, a Kirkwood-based business, at the grand opening of the East Atlanta Corner Project. Archibong’s mother, Gwendolyn Mosby, is visible on the left side of the photo. Credit: Sylvia McAfee

Together, they turned a formerly vacant lot, at the intersection of Flat Shoals Road and Bouldercrest Drive into a gathering area complete with a play area for children with tires collected in a recent tire drive in Atlanta City Council District 5; a community garden and picnic table made of wooden shipping pallets; and a gazebo they call the “Art Shed” because of its decorations. The shed collects rainwater on its roof and pipes water to a rain barrel for irrigating the garden.

On July 19, the volunteers threw a party to open the East Atlanta Corner Project. The event included a community yard sale, a mobile video game experience, and food trucks – including one from Dolphins Water Ice, a Kirkwood-based business specializing in Philly-style water ice.

In earlier eras, the notion of a community working together to improve itself was just that, a community effort. Now, the practice has been studied by scholars and given a name in a newly released book, Tactical Urbanism: Short Term Action for Long Term Change. The authors are Mike Lydon and Anthony Garcia.

Andres Duany, the architect and urban planner who in Atlanta may be best known as an early advocate of the Atlanta Streetcar, gave his blessing to tactical urbanism in a forward to the book. Duany and Lydon coauthored The Smart Growth Manual, with Jeff Speck. 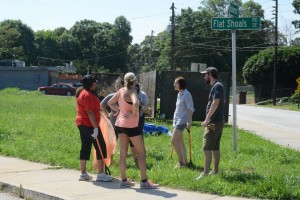 On Day 1 of the East Atlanta Corner Project, volunteers discuss the work required to turn a vacant lot into a community gathering place. Credit: Sylvia McAfee 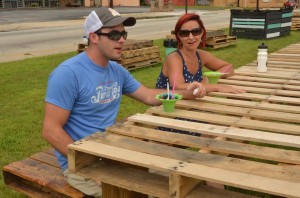 The picnic table and seating at East Atlanta Corner project is made of pallets, the very definition of the low cost materials used in tactical urbanism projects. Credit: Sylvia McAfee

A central theme of tactical urbanism is that residents improve their community through a series of small projects that are low in cost, high in impact, and completed much faster than if the government were involved. They aren’t expected to stand the test of time.

The East Atlanta Corner Project meets all these criteria. Consider just the shed.

Peery and Joel Slaton built the shed on land cleared by Michael Alatalo and the riding lawn mower he brought from home. Kyle Brooks painted the artwork on the shed. Rebecca Kern, Peery’s spouse, came up with the idea for using a rain barrel to irrigate the garden. Because there’s no faucet on the site, the first notion was to place several cat food plastic buckets at the park and have people take home an empty bucket and return with a pail full of water.

“We’ll see what happens in the long run,” Peery said.

“It will require maintenance and modification, because it was built hastily and not to last 10 years,” Peery said. “If this doesn’t work, we’ll find out what does. It could be that the community decides that if we put this much into it, we’d hate to see it go to ruin.” 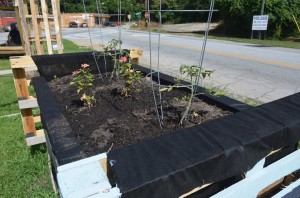 Tomatoes and flowers were planted in the community garden of the East Atlanta Corner Project. The containers were made of shipping pallets, lined with garden bed lining, and filled with soil. Credit: Sylvia McAfee 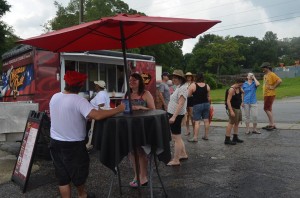 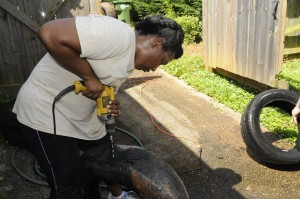 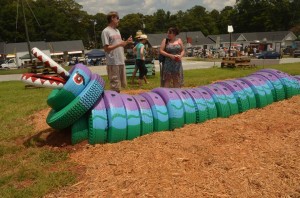 Previous Article
Can a 21st-century literary work change the way we imagine justice? On black swans and the literature of hope
Next Article
When ‘You Lie’ comes home to roost