‘Whiplash’ – drumming up jazzy conflicts with a march to the Oscars

“Whiplash” could well be called “An Officer and a Gentleman and a Drummer.”

The conflict is essentially the same.  An outsider-ish youngster with “something special” runs into an enigmatic martinet who’s determined to tear the kid down so he can (ultimately) realize his own potential.

But instead of Richard Gere in his dress whites being beaten on by gunnery Sergeant Lou Gossett, Jr., we have Miles Teller as a jazz drummer who rat-a-tats to his own beat and J.K. Simmons as a much-feared tough-love tyrant at a prestigious Manhattan music school.

Though he’s only a first-year student, Teller is good enough to catch Simmons ear. Invited to sit in as second drum with Simmons’ own elite ensemble, he’s over the moon – and just as quickly under the teacher’s heel. Soon enough, a pattern is established. Simmons encourages the kid, then maliciously tears him to pieces – usually in front of the rest of the band.

In retaliation, Teller practices until his hands bleed and his drums are splattered. To which Simmons sarcastically retorts, did you get blood on my drum kit? 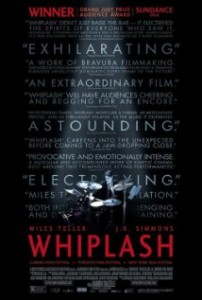 Further, in the time-honored tradition of military/sports movies, Simmons inevitably refers to his charges as “ladies” or “faggots.” (But never Hymies or Leprechauns…).

And so it goes. And goes. And goes. There’s an odd family dinner at which Teller’s relatives – all Upper West Side types – are considerably more excited about his brother’s potential football career than they are over the possibility Teller could end up at Lincoln Center one day.

Maybe it’s just me, but most Upper West Siders I know would be all over the emerging musician.

Writer/director Damien Chazelle has an affinity for, well, drummed-up conflict.

Sometimes this works. And sometimes it doesn’t. En route to the Most Important Concert In the Universe, Teller’s bus breaks down. Not his fault, of course; also not a good enough excuse for Simmons. However, neither rain, nor sleet, nor snow nor a 6-wheeler can stop Teller from making it there in the barest nick of time. Covered in blood, I might add.

And that’s not all…but you have to see the movie to find out the rest. That’s because “Whiplash” has a finale that, in its way, is almost as much of a twist as “The Sixth Sense.”

The final scene literally saves the picture – much as Prince’s 20-minute-concert at the end of “Purple Rain” saved that film.

Further, the movie is bursting with grand jazz sets, some classic, some not. All of them pure pleasure, especially if you love jazz.

Simmons’ character justifies his blood-on-the-band tactics by insisting the worst two words in the English language are “Good job.” He burns with a mission:  to push and push and push until his students give him – and themselves – everything they’ve got. And more.

A role as an explosive-crazy is time-honored Oscar bait. Plus, Simmons has been doing strong work for years. So go ahead and put him on the Academy’s Best Supporting Actor list.

And maybe, come February, at the podium, accepting the little gold man. After all, that’s exactly where Gossett ended up.

Previous Article
Column: Atlanta will host ‘pre-summit’ on health, quality of life in May
Next Article
Atlanta – a tale of two cities – rich thrive as poor continue to struggle