Why not a park? Ideas abound for redeveloping Fort McPherson

Atlanta faces a tough challenge as it prepares to absorb Fort McPherson on Sept. 15.

For starters, there are all kinds of strings attached once the military vacates the property – from federal requirements that it provide housing for the homeless to the immediate need for its protection by Atlanta police and fire.

Moreover, the city has to devise and adopt a master plan for this 488-acre tract amidst a fundamental shift in the economy. Atlanta and the state are supposed to woo redevelopment partners for the property at a time the region’s commercial and residential markets are moribund and showing few signs of recovery.

No wonder one fellow has suggested turning Fort McPherson into a park with a Civil Rights theme, according to Michael Dobbins, a former Atlanta planning commissioner.

“Given the fort’s history, it does make a certain degree of sense,” Dobbins said of the suggestion that he said was offered by a developer who has no interest in the property. Dobbins is now a professor at Georgia Tech’s College of Architecture. 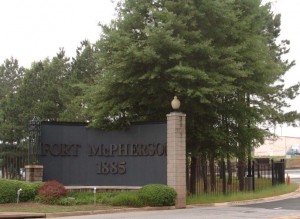 The proposal is not serious and is not even on the table. But the lens of history does cover some interesting tidbits around the time the fort was built:

A portion of Fort McPherson already is listed on the National Register of Historic Places.

The historic district is in the Northeast corner of the property. It covers a parade field and 40 buildings, including officers’ quarters, according to its page on the website of the National Park Service.

These historic components are referenced in the official redevelopment plan that’s been approved and presented to the city by the state authority created to oversee the fort’s transition to military use. 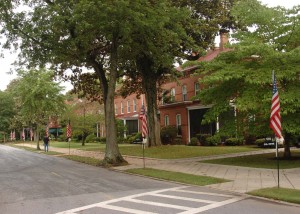 The authority’s plan envisions this future for the existing historic district:

Again, no one is suggesting that Fort McPherson actually become a park.

Dobbins mentioned the idea in passing, mainly to illustrate the breadth of decisions facing the Atlanta City Council and Atlanta Mayor Kasim Reed.

The Atlanta city government holds the power to guide the redevelopment future of Fort McPherson. Sometime later this summer, the city is to zone the 488 acres that have been off-limits to civilian control since the fort opened 126 years ago.

So far, two formal plans have been presented by the following entities:

Both plans are being reviewed by city planners, according to Charletta Wilson Jacks, director of Atlanta’s Office of Planning.

Jacks said a June 28 meeting has been scheduled for city residents and others to present their ideas and goals for redeveloping Fort McPherson.

“We want to review the more recent plan that has been done by Georgia Tech,” Jacks told the City Council’s Community Development Committee last week. “We want to review that and see how we can mesh some concerns and policies with that plan and incorporate it into a zoning blueprint.”