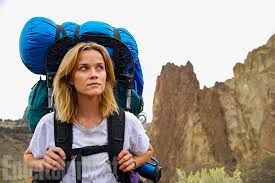 The first sounds you hear in “Wild” are gasps, moans, quick in-takes of breathe.  It could be a woman having an orgasm.

The next thing she removes is what’s left of her big toenail.

Witherspoon is quite wonderful (translation: Oscar-worthy) as Cheryl Strayed, whose best-selling memoir chronicled her solo hike from Mexico to Canada, along the PCT — the West’s answer to our Appalachian Trail.

Reese Witherspoon in the movie ‘Wild’

Flush with bad memories of a difficult past — beloved mom (Laura Dern) she achingly misses, husband turned abusive, a sordid spell as a waitress/hooker/heroin addict — Cheryl impulsively decides an eleven-hundred mile stroll might bring her some balance. And maybe, finally, some peace.

As the film cleverly establishes in its first five minutes, a woman on her own has problems aside from bad shoes and equipment malfunctions). The seen-it-all clerk at the roadside motel where Cheryl bunks before she begins her trek, says repeatedly, a room is $18, “unless you have a companion.”

Cheryl says  — repeatedly — she isn’t expecting a companion; she’s staying by herself. The clerk repeats her mantra. They go around maybe three times, like something from Ionesco.

A scene or so later, Cheryl eyes her options for hitching a ride to the start of the trail. Again, men don’t have to think this way. She has to evaluate which of these utter strangers is least likely to rape and dismember her.

Once her journey starts, her problems as a woman on her own continue. Two hikers smack their lips at her, like third-rate Big Bad Wolves. A ranger agrees to do her a favor if she’ll have a drink with him. Even a seemingly cuddly farmer — a Wilford Brimley type — refuses to help until he’s finished his chores and then, first thing, hands her a flask of his special brew.

Not all these men are what they seem, which is part of the film’s power. But by shrewdly weaving these encounters into the bigger story, “Wild” always reminds us that women face their own particular fresh hell (to paraphrase Dorothy Parker).

However, while “Wild” doesn’t shy away from feminist themes, it is, at core, a human story of endurance, courage, inventiveness and re-invention. The Cheryl we meet in Mexico — bent almost double under a pack three times her size — is not the same Cheryl 600 miles later, who swaps trail tips and outdoor misadventures with others on the PCT (somehow, taking on the same difficult task breeds a wonderful sort of camaraderie among the hikers).

Cheryl is not a born hero; rather, she achieves a certain sort of heroism through her transformation(s). She endures desert heat and deep snow, but more often than not, her greatest challenges are other people.fgv

And, of course, herself. When she starts out, rather than pluckily puffing to herself, “You can make it,” she constantly whispers under her breath, “You can quit any time.”

“Wild” isn’t an unrelieved slog; nobody has to watch Witherspoon saw off her own arm. There’s a great deal of humor, too. A seasoned PCT-er offers to go through her pack to lighten her load.   A few of the things he tosses: binoculars, Snapple, potato chips deodorant and a dozen condoms (she keeps two).

Later, she meets a well-dressed young man who, rather ironically, writes for something called “The Hobo Times.”

She insists she’s not a hobo. He’s too ecstatic to find a female “hobo” to listen.  It’s the motel all over again.  She tries to get him to understand she’ a hiker. He tries to explain to her what Harper’s Bazaar is. (Since she’s pitched Harper’s on stories herself, she kinda already knows…)

The film benefits greatly from what some might dismissively call a Granola Ethos. People do help each other out. The journey is more important the destination. The soundtrack is Leonard Cohen and Simon & Garfunkel. The quotes Witherspoon leaves in the PCT message boxes are Emily Dickinson, Robert Frost and Flannery O’Connor.

Near the end of her journey, Cheryl has a David Lynch-ian encounter with an alpaca, a little boy and his grandmother. The boy has a strangely formal manner. He also sings for her a few verses of “Red River Valley.”

“I will miss your bright eyes and sweet smile…”

Cheryl is now far more than her bright eyes and sweet smile.  Her memories of her past have evolved as well. She arrives at a question that never would’ve occurred to her a thousand miles ago; “What if I was never redeemed? What if… I already was?”

Redemption — for all the talk it engenders — remains a mystery.   But something close to redemption happened to Cheryl Strayed, and the slightest gleam of that golden hope rubs off on the viewer.

Not many movies make you feel better for having seen them.