Willis to Franklin, Woolard, Dickens: Mind your ethics before attacking mine; Franklin fires back 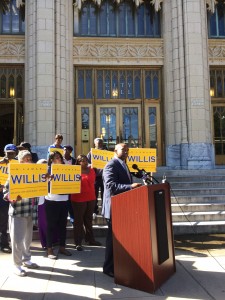 Willis made his remarks on the steps of Atlanta City Hall. Willis, who is seeking his fourth term, said he is a human being who has sought to atone for missteps in his personal life, wants the campaign to focus on governance issues, and is pushing back against the two former elected officials.

Willis raised these ethical issues about his accusers: Franklin provided haven in her home to her daughter and her then-son-in-law, who’s now serving a life sentence for his role in smuggling more than a ton of cocaine in a transcontinental operation; Woolard stopped working for Atlanta half way through her term in order to focus on her (unsuccessful) campaign for Congress; Dickens was a resident of Rex, not Atlanta, when he filed for bankruptcy in 2011 and evidently moved there in order to avoid tapping his wife’s assets to pay his creditors.

More than a dozen supporters flanked Willis as he presented his public rebuttal to criticism filed Tuesday by Franklin and Woolard. The two former elected officials made their case at an endorsement event for Dickens, who took the podium to say he thinks Atlanta should have an ethical government.

Willis made his response in a methodical fashion in front of a half-dozen reporters. Willis released his written remarks Friday afternoon. Here are some highlights of his presentation during a follow-up conversation with reporters: 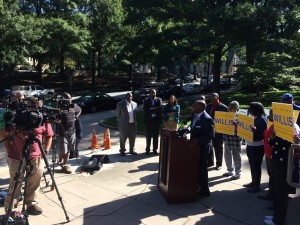 The Georgia Supreme Court ordered Oct. 7 that Willis be disbarred from the practice of law for ethical breeches. Mayor Kasim Reed has remained a steadfast ally.

Franklin’s daughter pleaded guilty in federal court in South Carolina, in 2007, to helping her ex-husband launder drug money by converting it to postal money orders.

Creative Loafing provided extensive coverage of the drug sting that netted Franklin’s daughter and former son-in-law, Tremayne Graham. Graham was implicated, but not charged, in a double homicide in Atlanta allegedly related to the drug ring. Former CL editor Mara Shalhoup wrote about the ring in a 2010 book, BMF: The Rise and Fall of Big Meech and the Black Family Mafia.

Previous Article
‘All is Lost’ and other movies about man versus troubled waters
Next Article
C.T. Vivian gets celebratory send-off at City Hall for receiving Presidential Medal of Freedom on Nov. 20