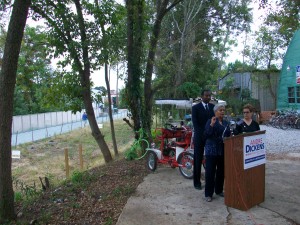 Franklin and Woolard, who passed strict ethics legislation in 2002, made their comments at an endorsement event for Dickens, a first-time candidate who seeks to unseat Willis from a citywide post in the Nov. 5 election.

Atlanta Mayor Kasim Reed remains a major backer of Willis, who on Oct. 7 was disbarred from the practice of law by the Georgia Supreme Court for ethical breaches. Recent telephone polls reportedly have tested Franklin’s popularity, an indication that the sitting mayor who backed candidate Reed in the heated three-way 2009 mayoral campaign may come under attack for her involvement in this 2013 citywide council race.

Willis maintains that he has apologized and paid the price for transgressions in his law practice and that they did not spill over into his work in elected office. Reed has supported Willis’ position. Willis did not appear to have any campaign representatives to monitor Dickens’ event, which has become a common campaign tactic in recent years.

Dickens took the podium to continue his campaign on a platform of ethics and jobs. 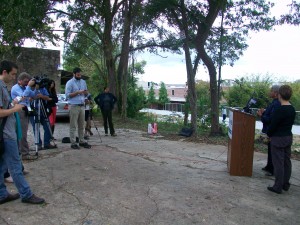 “We need an ethical government and good paying jobs,” said Dickens, an Atlanta native who ran a furniture store until he filed for bankruptcy protection following the recession. “People want Atlanta to be a better city.”

Franklin and Woolard also took on the city’s business and civic elite, who have endorsed Willis.

Franklin and Woolard criticized the rating of “excellent” awarded to Willis by the Committee for a Better Atlanta. The organization is comprised of more than 20 of Atlanta’s leading business and civic interests, and the review process was coordinated by a consultant for the Metro Atlanta Chamber who headed the 2012 transportation sales tax campaign.

“I was really troubled by that process,” Franklin said. “It seemed so far off base, so wrong, so out of character with Atlanta.”

Franklin now serves as this Barbara Jordan Visiting Professor in Ethics and Political Values at the University of Texas Lyndon B. Johnson School of Public Affairs. The ethics legislation she put forward was the strictest in Georgia at that time, according to Governing magazine.

Woolard said ethics are the bottom line of public service.

Woolard added that the absence of ethics results in public officials such as Anthony Weiner staying in the public arena long after he should have withdrawn. Weiner is the former New York congressman whose sexting scandals prompted his resignation from the U.S. House and fueled controversy in his failed bid for New York mayor this autumn.

Woolard cited a number of Willis’ ethics transgressions and concluded: “Why would he even want to return to office?”

Both Willis and Dickens have cash on hand to continue their campaigns. Willis reported $45,089 and Dickens reported $61,592 in their most recent campaign disclosures, which were due Sept. 30 and filed by each campaign last week.